Do you know that lady? 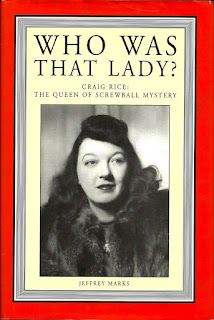 One of the most fascinating literary figures in the mystery domain is Craig Rice. She began her writing career with Eight Faces at Three, published in 1939, and quickly rose to the top of the mystery landscape. Then, just as suddenly, her production dwindled. In the first six years of her career, she wrote at an astounding pace, coming up with 17 books (going by the bibliography in Jeffrey Marks’ Who Was That Lady?). In the final 12 years of her career, only seven books were published, of which she edited one and one was a collection of previously-written pieces.
But who was Craig Rice really? The only thing that seemed readily available was a magazine article from Time of dubious veracity. Much confusion existed about her background and her life, and just about the only thing everyone more or less agreed about was that drink destroyed the rising star’s career. Alcohol flows freely in a Craig Rice novel, but her life was a far cry from the farce that makes up a typical John J. Malone novel. In an introduction to 8 Faces at 3, published by IPL, William Ruehlmann wrote that “Craig Rice wrote the binge but lived the hangover.” You couldn’t better sum up Rice’s tragic life and the contrast it forms with her extremely funny books. But if you, like me, are itching to find out just “Who Was That Lady?” I highly recommend Jeffrey Marks’ biography of that name.
Jeffrey Marks joined me earlier this year in a discussion about Craig Rice, which I unashamedly titled The 43% (Alcohol) Solution. I consider it one of this blog’s high points; it is primarily a discussion between two fans about an author’s work, with one key difference: one of the fans happens to be Craig Rice’s biographer. Jeff gives just enough biographical detail to whet your appetite for more. And he delivers on that promise in his book.
Craig Rice’s life was truly a tragic one. Abandoned by her mother at an early age, she was displaced frequently as a child and her bitterness shows in her work, despite her denials that these events affected her writing. As her career progressed, she began to get more and more dependent on drink. She ended up having physical battles with her husband Larry Lipton, and their relationship ended in a bitter divorce; Lipton, who had expressed nothing but disdain for his wife’s work, suddenly changed faces and claimed authorship of them. Needless to say, Lipton does not come across in a particularly flattering light in Jeffrey Marks’ biography: a man with “serious” literary pretensions, he seems to have been furiously jealous that his wife was the breadwinner of the family and did what he could to upset the apple cart from that direction.
Craig’s drinking only got worse, and the woman who once rivalled Agatha Christie in paperback sales was reduced to a mere shadow of her former self. Jeff covers the hospitalizations, attempted suicides, disastrous marriages, Rice’s emotional dependence on the men in her life, etc. All of this is done in a fantastically engaging style. It kept me turning the pages, even at those points in Craig’s life that make Hamlet look like a comedy. (The story took a particularly disturbing turn with her fourth marriage, though it was the fifth from Craig’s point of view.) I knew next to nothing about Craig Rice going in, and I wanted to see her come out of it all triumphantly.
I thought Jeffrey Marks’ biography of Anthony Boucher was pretty darn good, but this book defies description. He obviously has a great passion for Craig Rice, and he treats the subject material with great care. It’s intelligently written and extremely informative— in my estimation, it’s right up there with the best mystery biographies like Douglas G. Greene’s The Man Who Explained Miracles and John Dickson Carr’s The Life of Sir Arthur Conan Doyle.
Do I have some reservations? Well, at the third chapter, the author gives a bit too simplified a view of the detective fiction field. It's the typical one with sharp lines drawn between the American school of writing and the British, but the truth is far more complex than this simple version we've been given in countless articles on the likes of Raymond Chandler or Dashiell Hammett. However, I know that Jeff Marks does know his stuff in this domain and this is probably just done for convenience's sake. After all, the topic is Craig Rice, not Raymond Chandler's writing.
One warning that’s worth mentioning: the ending of The Corpse Steps Out is given away. Do yourself a favour and read The Corpse Steps Out first, because the culprit must be named for the biographer to point out something important about the work. It’s one of my personal favourite Rices and I luckily had read it, so I wasn’t upset in any way.
Overall, Who Was That Lady? is an extraordinary book. Jeffrey Marks chronicles the life of a truly extraordinary figure and goes through her successes as well as her tragedies. When he reaches the moment of Craig’s death, I found my eyes watering. It’s an excellent read that I unreservedly recommend to avid fans of this author or newcomers who are intrigued. Used copies can be found online, but for Kindle users, there is a Kindle edition available on Amazon for a mere $5.99 (what a bargain!).
Jeffrey Marks has done extraordinary work in the domain of mystery biographies— he’s currently hard at work at a biography of Erle Stanley Gardner. Gardner makes a few appearances in his biography of Craig Rice, and I for one can’t wait to read the book.