One Hell of a Time 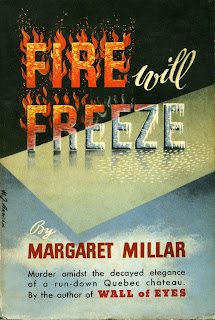 It is wintertime, and the bus struggles to stay on the road in the Québec countryside. The driver finally decides to stop the bus and walks out to fix the snow chains… never to return to the bus. The passengers become anxious and after half an hour decide to look for the driver. They follow footprints to an eerie house, where they are first greeted by gunfire and afterwards, have the door opened for them by Miss Rudd, a woman who is quite cheerfully insane.
Miss Rudd lives in the house with her nurse, Floraine, who is not at all happy to have the bus passengers in the house. She denies seeing the bus driver and claims that nobody has come to the house. She seems quite anxious to get everyone out of the house… but she promptly changes her mind when they all offer to pay for the night’s stay.
And it proves to be a most eventful stay indeed! Part of the reason might be that this is a novel written by Margaret Millar (entitled Fire Will Freeze). It’s a 1944 novel set during World War Two, and as a bloody conflict wages on another continent, the guests have a tense stay, nothing like the charming little château they all thought they would end up in. Miss Rudd demonstrates a tendency of hers to cut things up when she chops up a hat belonging to Mr. Anthony Goodwin (no relation to Archie as far as I can tell). But it wasn’t a particularly nice hat, so naturally the incident is forgotten… until one of the cats, Étienne, is found with its throat cut…
The general consensus is that Miss Rudd should be locked up, and Floraine does that, although she seems baffled— Miss Rudd, it seems, was very fond of Étienne… But soon, Floraine herself disappears, and the horrors begin to multiply. 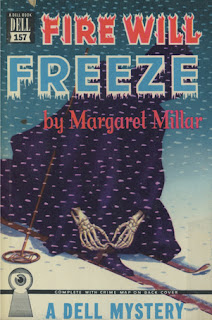 The key ingredient to this book’s success is the author and her writing style. Simply put, Margaret Millar was a brilliant author. She could create tension at the drop of a hat and the way these characters soon begin to get at each other’s nerves is marvellous. And something as simple as a darkened hallway becomes terrifying:

She began to creep backwards towards her own door. The darkness had a strange quality of being alive. It was not absence of light but something more real, a kind of black clammy air which seeped in through the walls and the doors, a dark fog rising from the cellar.

And ironically, dark as this tale is, it is laced with plenty of humour.Much of it is a grim, bleak sort of humour that does a marvellous job underlining the situation these characters find themselves in. One of my favourite moments of the  book is when rich Mrs. Vista declares she cannot help search the house, because she doesn’t have the necessary élan, the joie de vivre, the feu de joie. Her protégé, Mr. Goodwin, then chimes in:

Mr. Goodwin blinked and said he too lacked these three necessary qualities; but after being hauled to his feet by Crawford he admitted he might work them up.

There’s another great moment between Mrs. Vista and Mr. Goodwin—at a point in the novel, they’ve had so many surprises that when they see another one unfold in front of them, they hollowly discuss just how shocking the sight is. This bizarre combination of unnerving suspense and comedy fascinates me. Fire Will Freeze is a very powerful book, with characters I feel I’ll remember for a long time to come. And let’s not forget the added bonus of its wintertime scenes. I find something fascinating about the wintertime, and Millar brings a truly Canadian winter to life with ease. The opening scenes with the bus and the trek through the snow are worth their weight in gold. 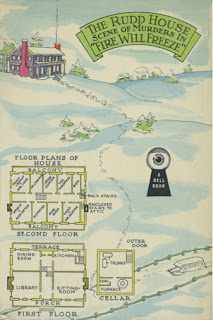 And yet, mystery-wise, the book is not great. For the first half of the book, you’re not quite certain where the plot is headed—then at around the midway point, there’s a scene that gives the entire game away. At Chapter 10, we find out some fundamental facts that make much of the mystery instantaneously clear. I really feel that without the chapter, the book would work far better as a mystery. Even with that scene, the reason for the bus driver’s disappearance is frankly arbitrary.
But despite these reservations over plot, I still heartily recommend Fire Will Freeze. It has major flaws as a mystery, and if you read it for that angle alone, you’ll probably walk away wondering where my sense of taste has gone. My fascination with this book lies in its fascinating characters, the effectively unnerving atmosphere, the way the premise is carried out, its bizarre mixture of suspense and comedy… In short, it’s well worth a read. I deeply regret not giving Millar a chance sooner—the lady could write!