The Art of Murder 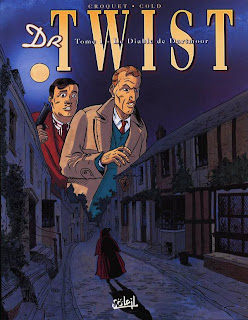 Back in June of last year, I enthusiastically reviewed Paul Halter’s novel Le Diable de Dartmoor (The Demon of Dartmoor), which I unequivocally called a masterpiece. And I stand by those words— Halter’s novel has excellent atmosphere, convincing enough characters, and one of the most fiendishly ingenious impossible crimes of all time.
At the end of that review, I noted that a comic book adaptation of the novel exists and that “I don’t own a copy, but I hope I will someday”. That day arrived a few weeks ago, and I sat down and read the bande dessinée adaptation. It did not disappoint in the least.
In the village of Stapleford, in Dartmoor, three young girls die in three years, at about the same time each year. Witnesses are able to establish one thing— the killer had to be an invisible man! One girl was actually seen pushed off the Wish Tor to her doom by a pair of invisible hands— the others were seen merrily chatting to someone that nobody could see.
After a period of relative quiet, up-and-coming actor Nigel Manson purchases nearby Trerice Manor, undaunted by tales of an unsolved murder, when a woman (despite being alone on the stairs) was pushed down a staircase in front of witnesses. In fact, he uses it as inspiration for his new play, The Invisible Man, and then does a singularly foolish thing by inviting his mistress (and another man) to stay with him and his wife over the weekend. All this culminates when Nigel is pushed out of a window: but witnesses in the room behind him swear nobody approached him!
Jean-Pierre Croquet is the man in charge of the adaptation, and the drawings were done by Francis Cold. (Patricia Faucon was in charge of colourising the drawings.) The comic book was released by Soleil Production in August 2002, and although it claims it is “Tome I” in a Dr. Twist series, no other volumes have been released to my knowledge. Paul Halter’s French website, however, mentions an unpublished adaptation of La Mort derrière les rideaux (Death Behind the Curtains), and it includes a few pictures from the book (which I have yet to read).
It is a genuine shame that there is only one published comic book adaptation, because it is brilliantly done. Jean-Pierre Croquet shows a tremendous amount of respect for Halter’s original novel—the transition from novel to comic book is nearly seamless. As best as I can remember, practically every little detail about the plot makes its way into the comic book. And so, plot-wise, the comic book is nearly flawless…
Nearly flawless. There are a few very odd moments that result from condensing the novel into a 50-odd page comic. For instance, the very first page begins with a murder (a jolly way to start any book). But immediately after the victim is pushed off the Wish Tor by a pair of invisible hands, we cut to our two witnesses bolting to the house of trusted professor Victor Sitwell. There is no frame to show a horrified reaction or anything of the sort, and it does feel odd. There are a few other moments where the story seems to cry out for an extra panel or two— these are the consequences of condensing the material.
These few problems aside, the adaptation really is excellent. The art is positively fantastic, and the artist manages to make an already-atmospheric tale even more so through the power of his art. This is particularly evident near the end, when the events are reconstructed and we flash back to one of the murders. The image is simply haunting. 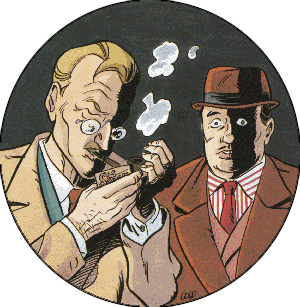 I also like the way the artist has drawn Dr. Alan Twist and his sidekick, Inspector Archibald Hurst. I’ve shamelessly stolen one drawing to illustrate my Paul Halter page. It all just feels right. Twist resembles a famous comic book character named Clifton, which according to M. Halter is how he envisions the character as well.
And that’s all I can say. I don’t want to go through the comic in detail because the story is so delicious— I don’t want to spoil anything. (It appears that it could be the next English translation in the works.) Apart from a few odd moments relating to plot condensation, the story is fabulous. It is filled with complex twists and turns and has a memorable impossible crime, one of the all-time best. The art is simply excellent and really adds to the story. Overall, I highly recommend it.