Hope for the Best 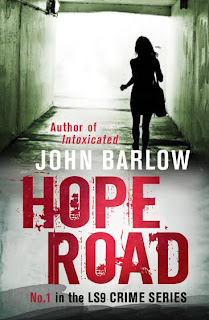 A while ago an interesting piece appeared in The Rap Sheet, telling “the story behind the story” of a new book by John Barlow entitled Hope Road, which has been released as an e-book exclusive (you can purchase it from Amazon.com here). I read the piece with enormous interest and thought to myself that maybe I’ll read this book someday... that day came a lot sooner than I expected. I was pleasantly surprised when I was asked to review the book. I didn’t hesitate— it sounded like something I’d enjoy reading. And my instinct didn’t let me down!

Hope Road is the start of a new series of crime novels set in Leeds. The protagonist is John Ray, whose father Tony was a big-time crook back in his heyday. Now, Tony is living in a retirement home and John has managed to turn the family business (Tony Ray’s Motors) around and make a legitimate living out of it: in fact, when the story opens, John accepts an award for being the top used car dealer in the Yorkshire region.
Everything goes downhill from there: a dead prostitute is discovered in the boot of a used car from John’s place, along with fifty thousand in forged currency. Owen “Freddy” Metcalfe, John’s good friend and employee, promptly disappears without a trace, which makes things look very grim for John when the police show up and are not in the mood for exchanging pleasantries. Eventually John tracks Freddy down, only to have him promptly arrested. Freddy denies everything but his defense is a poor one and only makes the case look blacker.
John doesn’t like it one bit. He’s convinced that Freddy has been set up and decides to sniff around for clues, much to the annoyance of the fuzz. John must confront his family’s criminal past as he sets out to prove Freddy’s innocence, but the investigation will end up costing him dearly… 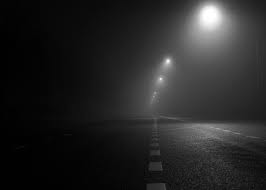 I’ve only recently warmed to the idea of hardboiled mysteries, and Hope Road is very hardboiled indeed. It is written in that style that critics often insist is “American”; yet Hope Road remains distinctly British. Leeds comes across as a vibrant, distinct city— too often in books like this, the city remains a thinly-veiled version of Raymond Chandler’s Los Angeles, where everyone’s job is to make the hero’s life a living hell.
Barlow does not fall into this trap: his characters are complex and quite fascinating. John always seems to be hiding something, and there are some scenes at the beginning of the novel that won’t quite make sense until the finale. You’re never quite certain if John has rejected his family’s criminal history or embraced it—it makes for captivating reading. The characters he encounters are also interesting, even when there’s enormous potential for caricature—in particular a character who goes by the moniker of “Sugar”, who could have easily been a stereotypical, Chandler-like goon. Instead, we get to see his tough side when Sugar confronts some police officers on neutral ground, and then we see his kind side when he arranges to have the victim’s mother taken care of.

But of course, the mystery genre is one that relies heavily on plotting, that dreaded P-word. How does the plot of Hope Road stack up? For a first attempt at mystery, it’s not bad at all! There is one neatly hidden clue that I never spotted, but even without this clue it’s somewhat easy to guess who the killer is. But this mystery has multiple layers— murder is not the only riddle. There is a shady hotel with a crooked manager, a pair of Ukrainian tractor salesmen who have an annoying habit of appearing and disappearing as convenient, the smuggling of forged currency… it’s deliciously complex and easily keeps your attention.
I was particularly captivated when, at about the 2/3 point of the book, a character turned up who might as well have been the reincarnation of Mike Hammer. He is a genuinely threatening presence and adds a time element to the whole game—he threatens the safety of those John cares for if he doesn’t get the name of the killer. This character has a personal reason for exacting revenge— not justice, mind you…
Now, if you’re the type of person who dislikes profanity, I do warn you that it occurs rather frequently in this book. Barlow tends to use profanity quite effectively to underscore the severity of certain threats or situations or whatnot. But near the beginning of the book, I did find its usage somewhat gratuitous for my tastes. When it comes to swearing, I find restraint more effective— then, when it is used, it actually means something. I tend to dislike characters whose native language is Profanity. So I was glad when this aspect of the book got under control fairly quickly. 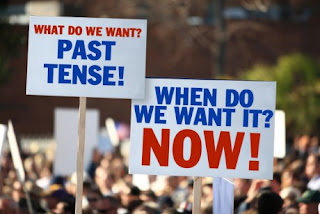 I’ve only one serious complaint, and that is a stylistic one: the author chose to write this book in the present tense. While this doesn’t constitute a crime against humanity, I did find it an odd choice and it was distracting at times, especially near the beginning of the book. Over time, though, I got used to this technique and by the end barely noticed this at all.
Overall, Hope Road is a wonderful read which I highly recommend. If you already tend to enjoy hardboiled stories, you’ll probably enjoy it... but even if your tastes are less hardboiled, I think there is plenty in this book to enjoy nonetheless. It is an engrossing story with fascinating and complex characters. The setting is wonderfully portrayed and the plot is suitably complex. The atmosphere is a bit on the dark side and the book is a gripping read, especially when it breaks out the big guns as it races to the finale. All things considered, this is a tremendously exciting debut and I look forward to more from John Barlow. Bravo!