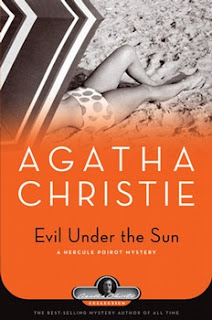 Arlena Stuart Marshall is a beautiful woman, and she flares up passionate emotions wherever she goes. Men adore her, or at the very least, admire her beauty. Women despise her. It’s not the most harmonious atmosphere she brings with her to the Jolly Roger Hotel, where the great Hercule Poirot is coincidentally staying. She seems to have her sight set on young Patrick Redfern, recently married to Christine, and this relationship is tearing apart the young marriage.

Someone at last decides to stop Arlena for good, by strangling her at Pixy Cove. Hercule Poirot is asked by the local police to help out with the investigation. And thus, he begins to question everyone. There’s no shortage of suspects, he soon discovers: there’s Arlena’s husband Kenneth and his daughter Linda; there’s the dressmaker Rosamund Darnley, something of a childhood sweetheart of Kenneth Marshall’s; Patrick and Christine Redfern, whose marriage was being threatened; Revered Stephen Lane, a religious fanatic convinced Arlena was the incarnation of evil… and there’s plenty more where that came from!


From a pure plot perspective, this is one of Agatha Christie’s finest triumphs. She provides readers with scrupulously fair, yet very tricky, clues, double clues, and red herrings. Everything adds up in the end and fits the pattern that Hercule Poirot has deduced. You can look forward to such odd elements as a bottle thrown out of a window and a bath that nobody will admit to having taken. 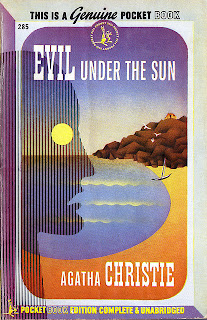 At the same time, this manages to be one of Christie’s best books in terms of characters. In particular, she does a great job with the character of young Linda Marshall. She is an awkward child, still at that stage between childhood and adulthood in terms of maturity—she wants to be treated more like an adult yet her thinking in many ways is still very childlike. She isn’t a particularly attractive child and her mother-in-law’s finished grace and poise does nothing but make her feel even more insecure. It’s a very convincing portrayal of an insecure, shy young girl.

The identity of the murderer is one of Christie’s most chilling. X (who, for now, I will pretend is male) proves himself to be so cold-hearted and brutal. The motive is purely selfish and X’s way of attaining his goals is wholly unscrupulous. You’re glad to see X caught in the end—and, in fact, Hercule Poirot manages to provoke X until he loses his head and gives himself away.

But another interesting facet of the book is Christie’s rather feminist critique of society. (I don’t usually like to read things from a feminist perspective, but please, bear with me. This aspect hadn't struck me until this particular reading.) Everyone on the island is quick to blame Arlena: she’s the incarnation of the whore of Babylon, she’s the devil in a dress, she’s a seductress of men and breaks apart households as a hobby. The Reverend Stephen Lane denounces her in front of Poirot: 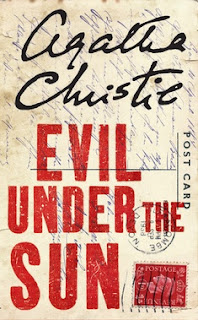 “Such women are a menace to—a menace to— (…) That woman is evil through and through. Do you doubt it?”
Poirot said slowly: “It is difficult to be sure.”
Stephen Lane said: “But, man alive, don’t you feel it in the air? All round you? The presence of Evil.”
Slowly, Hercule Poirot nodded his head.

But as we find out in the end, Poirot is not at all agreeing with Stephen Lane’s summation of Arlena’s character. He has a very different interpretation from anyone else’s. Throughout the book, everyone chastises the late Arlena: beautiful, yes, but what a devil! What an evil woman! So heartless, so ruthless! When a note is found from a lover, everyone emphasizes just how love-struck the poor fellow is by her, but Poirot notices something else. At the finale, he reveals just what kind of person Arlena really was, and through this, I think Christie was criticizing the mental attitude that it’s always the woman’s fault when, say, a marriage is ruined. It has potential for being one of Christie’s most powerful and relentless moments… but there’s a small problem with it. Christie is so concerned with giving Arlena dialogue that can be interpreted a few ways so that, ultimately, Arlena comes across as a rather empty-headed airhead. And it’s hard to feel much sympathy for someone so shallow. It’s all because of a few scenes of dialogue that we could have easily lost, without which Arlena would seem far more human. 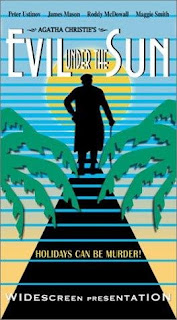 But that is nothing more than a minor problem in the grand scheme of things. After all, this isn’t feminist literature, it’s a mystery. I didn’t open this book expecting feminist insight on the 1930s/1940s and how this affected the war effort—I came for a good story. The book was published in 1941, but there’s no mention of the war (at least not as far as I can recall). That doesn’t mean everything is rosy and cheery and perfect with the world—in fact, it’s a rather sombre story of nothing more nor less than pure, concentrated evil occurring in an apparently idyllic place.

Overall, Evil Under the Sun is one of Agatha Christie’s masterpieces. It’s a heck of a read with a wonderful plot and excellent characters, even if the victim ultimately comes across as rather empty-headed. It delicately treads that line between ingenuity and over-ingenuity and manages to stay on the side of ingenuity in a mad literary equivalent of a sabre dance, giving readers various clues that seem to make no sense until Poirot explains all. This book ably demonstrates Agatha Christie’s universal appeal throughout time.

This book was read as part of my 2012 Vintage Mystery Reading Challenge, under the theme of “Devil Take the Hindmost”.