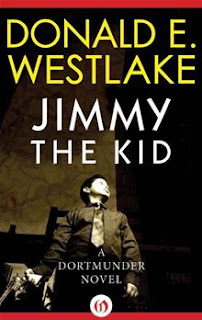 It was supposed to be a regular, run-of-the-mill burglary. All John Dortmunder had to do was pry his way into the place and walk out with a bunch of furs. And then… Andy Kelp shows up. After the events of The Hot Rock and Bank Shot, Dortmunder is somewhat understandably horrified. He doesn’t want to subscribe his way into another Andy Kelp special. So instead he starts shouting at Kelp to get away. Before he knows it, he’s woken up the entire neighbourhood and everyone is yelling at each other, with the police on their way to deal with the outburst.

Andy Kelp is hurt that Dormunder would react in such a way, but he immediately sets about proposing a brand-new plan—one that’ll definitely work this time! See, Kelp was recently in jail for a few days before being released due to an illegal search. But behind bars, he came across some books by a some guy named Richard Stark. He discovered Stark’s novels about master thief Parker (“He'll remind you of Dortmunder,” he tells Stan Murch) and he particularly loves the book Child Heist—particularly how the crooks get away with it in the end!


The plan Kelp proposes is simple: they will take Child Heist and use it as a blueprint for a real-life caper! They’ll find a rich child and abduct him, take him to an abandoned farmhouse, then demand ransom money. Stan Murch will do the driving. Stan’s mom and May Bellamy will take care of the brat. And Dortmunder can be the brains of the operation, just like Parker. And hey, here’s little Jimmy Harrington. His father’s a rich man who can easily afford the $150,000 ransom. What’s the worst that could happen?

The result is side-splittingly hilarious. Of all the comic novels penned by Donald E. Westlake, this is the absolute best thus far. Things keep going wrong for poor John Dortmunder, and in this book, Westlake takes a masterful crack at his alter ego of Richard Stark. He writes a few fictional chapters from Child Heist, which read very much like a typical Parker novel. There’s a grim atmosphere and the small bits of humour are extremely sardonic. Parker is as cold and ruthless as ever.

Then, the “real-life” scenes are played out with Dortmunder & Co. And the things that go wrong are hilarious! Stan’s mom, for instance, is chosen to make the ransom calls. It’ll be no big deal, she can just read her lines from Child Heist, right? Well—just read the book to find out what kind of hilarious mix-ups ensue—I will just say that the calls get wildly off script. Particularly hilarious is the bit where Stan’s mom attempts to telephone Harrington in his car to give him further information about dropping off the money… but I will say no more. You have to read the book to appreciate just how wild it is!

These scenes are just great for several reasons. Not only do you get a true taste of Westlake’s versatility as a writer, he also good-naturedly pokes fun at his own writing, pointing out just how many things had to go right for Parker and his gang when they pulled off the kidnap. It superficially seems like a perfectly fine plan, like nothing could possibly go wrong. But the kidnappers didn’t count on things like motorcyclists, traffic cops, old horror films, a locked-room disappearance, and radio quiz shows! 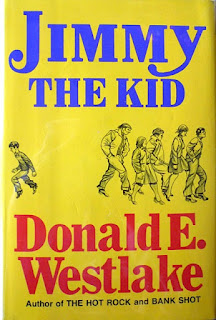 Then there are the Harringtons, father and son. The gang could not have gotten their characters more wrong. Jimmy is not the vulnerable young boy from Child Heist—he mocks the idea of the gang wearing Mickey Mouse masks because he’s really far too old for such psychological coddling. As you might guess, Jimmy is an extremely precocious young lad and he manages to give the gang quite a bit of trouble along the way!

As for Herbert Harrington, a big name on Wall Street, he really has no idea how to negotiate his way out of the situation. Why is this? Westlake explains in detail:

In an equivalent situation on Wall Street, it would be three or four working days before anybody even admitted the boy had been taken. Then, there'd be a period of weeks or months when the kidnappers would publicly maintain the posture that they meant to keep the boy, had no interest in selling him, and wouldn't even consider any offers that might come their way. This log-jam, assisted by continued denials from Herbert Harrington or his spokesmen that (a) he was interested in negotiating a re-purchase, (b) that he was in a cash or tax position to make such a re-purchase possible, or (c) that in fact he had ever had such a son at all, would eventually be broken by tentative feelers from both sides. Bickering, threats, go-betweens, all the panoply of negotiation would then be mounted and gone through like the ritual of High Mass, and it would be even more weeks before anything like a dollar amount was ever mentioned. And in fact dollars would be the very least of it; there would be stock options, rebates, one-for-one stock transfers, sliding scales, an agreement with some meat on it. 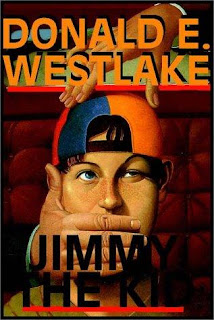 That right there, my friends, is pure comedy gold!

Overall, I absolutely adored Jimmy the Kid, which takes everything I love about Parker and Dortmunder and meshes it all into one coherent, brilliantly funny narrative. Every moment is a pure delight, and the finale, where the entire gang has to pull of a locked-room disappearance, is the best one of all the Westlake novels I’ve read thus far. And there are plenty more novels left in the series! All three of the first Dortmunder novels have been masterpieces thus far, and they only get better and better. This one is the best I’ve encountered thus far. As with the two previous entries in the series, I got my copy from MysteriousPress.com and I have nothing but praise for the Kindle e-edition, which has excellent formatting and editing. It was worth every penny spent!

Note: Apparently the book was adapted into a film that was a Gary Coleman vehicle. Oh, the horror!