Written by Patrick
Your Excellency—
The Bill you are about to pass into law is an unjust one (…) Therefore it grieves us to warn you that unless your Government withdraws this Bill, it will be necessary to remove you, and not alone you, but any other person who undertakes to carry into law this unjust measure.
(Signed) FOUR JUST MEN. 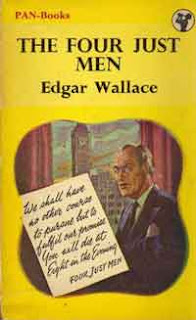 “IT IS IMPOSSIBLE NOT TO BE THRILLED BY EDGAR WALLACE” proudly declares the back of my edition of The Four Just Men. Indeed, back in his day, Edgar Wallace was a wildly popular author. Even Hitler was a fan of his work—although you’ll never see that on a dust jacket! An enormously prolific author, Wallace holds the record among 20th century authors as the one with the most film adaptations based on his work. He’s even more known today for the role he played as the co-creator of King Kong… and then there’s the Four Just Men series, which began with The Four Just Men in 1905.

Julian Symons might scoff at this point—Wallace can’t be a real writer! He was too popular! And he has a point, in that Wallace’s output is so immense that the quality is highly variable. But one thing remains constant, and that is the factor of unadulterated fun that goes into reading an Edgar Wallace adventure. The Four Just Men is just that—incredibly fun. There’s even an impossible crime thrown into the mix—but more on that later. 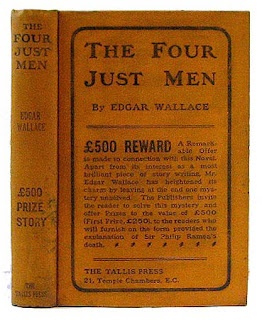 The titular quartet is a group of men who are out to assassinate the Secretary of State for Foreign Affairs. (A cheerful proposition, that.) Their reason: the Secretary, Sir Philip Ramon, is championing a bill that would effectively extradite revolutionaries to their home countries, which are under a merciless, corrupt regime that needs to be quashed. Sir Philip’s intentions are not evil, but the way they see it, a great injustice will take place should the bill pass. So they offer Sir Philip an incentive for not passing the bill.

But unfortunately, Sir Philip is a pig-headed man, who doesn’t know whether to believe in a Heaven or Hell. But he reasons that Hell might not exist, and since he knows how displeased some diplomats will be should the bill not pass, it would be in his interests to get it to pass after all. This means war, naturally, and the Four Just Men continue to taunt Sir Philip with note after note, calmly announcing his death should he not back down. And eventually this leads to Sir Philip’s death in impossible circumstances, despite being guarded by practically all the policemen available! 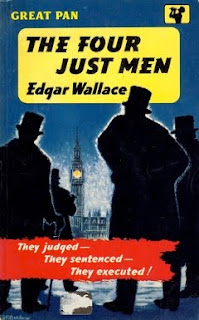 Wallace ended his book on a cliffhanger. If you were a reader in 1905, you did not find out how Sir Philip was killed… Instead, there was a contest where Wallace offered prize money to readers who solved the case. This plan worked in that it made The Four Just Men an instant bestseller. But it backfired big-time, as Wallace did not count on so many people figuring out the solution… and due to the wording of the contest’s rules, paying out the prize money nearly bankrupted him! (In fact, when he died, Wallace’s estate was literally nothing but a mountain of debts!) For once, Wikipedia has a good article on this mess without spoiling the solution.

But frankly… Wallace did not hide the answer very well at all. It screams out almost at once, and it really astounds me that the medical examiners failed to figure out just what this mysterious thingamajig on the corpse was. This is also the only book I can call to mind in which an electrician at one point declares that he’s “given up trying to account for the vagaries of electricity”.

All right, so the mystery isn’t all that hot. Is there anything else worth reading? Yes! Wallace makes some very interestingly liberal statements on politics in general (Julian, didn’t you say mysteries were inherently conservative back in the day?)—the Four Just Men see themselves as those who deliver justice, and Wallace seems to share their point of view. (“Justice” for them includes overthrowing a corrupt and cruel government. Julian, where are you?) 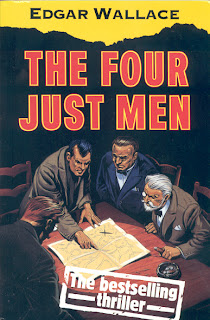 And there is plenty of social satire. I absolutely love the scenes in Parliament, especially when the Four Just Men make a guest appearance near the beginning. There’s also a priceless bit in Parliament with the Prime Minister late in the book. There’s another great part when policeman arrest a pickpocket and he is greeted with fake joy at the police station— which quickly becomes genuine when the police realize that the pickpocket can identify one of the Four Just Men!

And it’s important to note that all this is lovingly written with a sense of, above all, fun. I really can’t emphasize that enough. It’s a quick read and highly entertaining. Wallace isn’t aiming for anything more. This isn’t a brand of hopeless literature that aims to tell us that we’re all dull as death and deathly dull. This is a fun thriller-mystery-adventure hybrid, and although the mystery is not quite the success it might have been, it really doesn’t detract from the fun qualities. The social satire and the interesting commentary on justice are also well worth reading. Overall, I can’t think of a reason to not read the book. After all, it is impossible not to be thrilled by Edgar Wallace.

This review was written as part of my 2012 Vintage Mystery Reading Challenge, under the theme of “How Like an Angel”.He’sH