Written by Patrick
Four little Indian boys going out to sea;
A red herring swallowed one and then there were three.

Sure, he’s pompous and conventional (Justice Wargrave at one point contemptuously thinks of Armstrong: “These doctors are all the same—they think in clichés.  A thoroughly commonplace mind.”).  And he likes his money and his standing in society.  But these are characteristics of many of us, to some degree or another.

Yet of course the reason Edward George Armstrong was invited to meet his death on Indian Island was not for any minor character flaw or quirk he might possess, but for his having “caused the death of Louisa Mary Clees.”


Yes, he operated under the influence of alcohol and the woman under the knife died.  Armstrong admits this—to himself, if not to others:

“Drunk—that’s what it was—drunk...and I operated!  Nerves all to pieces—hands shaking.  I killed her all right.  Poor devil—elderly woman—simple job if I’d been sober....God, it gave me a shock!  Pulled me up.”

Unlike Anthony Marston, Armstrong seems to have a guilty conscience (though it does not cause him to admit what he has done) and he has reformed.  On the island itself, he is professional and decent and courteous as calamitous events befall the party (if a bit pompous still and understandably flustered).

Yet he is meted one of the worst deaths of the lot.  As Mr. Owen writes: “A quite vigorous push sent him off his balance and splash into the heaving sea below.”

What an awful way to go! Of course it fits the rhyme beautifully.  “A red herring swallowed one”—does anyone ever decipher that clue—I didn’t when I first read it, though I was but a kid. 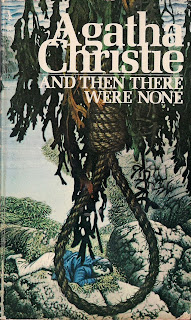 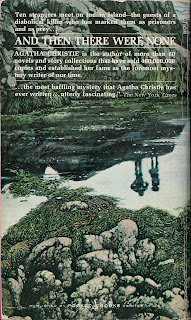 And, admittedly, the timely (and fortuitous) appearance of Armstrong’s drowned corpse sends events spiralling down into their final lethal maelstrom (the Pocket paperback edition of this title that I read back in the 1970s memorably illustrates this scene).  This was a death that to me has always felt necessitated more by plot mechanics than “justice.”  This is one Indian Island death that has always seemed to me out of proportion with the crime.

Though perhaps I would feel differently were I a relation or friend of the late Louisa Mary Clees. 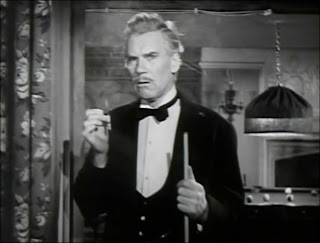 Patrick: It’s the first night on the island and Dr. Armstrong is dreaming about the murder he committed, operating while drunk on Louisa Mary Clees: “It was very hot in the operating room. . . . Surely they’d got the temperature too high? The sweat was rolling down his face. His hands were clammy. Difficult to hold the scalpel firmly . . . How beautifully sharp it was. . . . Easy to do a murder with a knife like that. And of course he was doing a murder. . . .”

It’s this scene that really sets Dr. Armstrong apart for me. Very few of the guests on Indian Island ever admit that they’ve committed murder. Anthony Marston dismissed his crime as a nuisance that briefly cost him his license. Emily Brent hides behind her Bible. Vera Claythorne uses love as an excuse. Mr. Blore claims it wasn’t his fault an innocent man died in prison, although he sent him there. Phillip Lombard doesn’t give a damn—his victims were black. And these are just some of the crimes committed off the island—even Mr. Owen claims the Indian Island murders are nothing but justice. 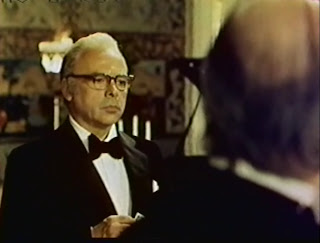 But here we have Dr. Armstrong. He doesn’t say it out loud but he knows in his heart that what he did was categorically wrong. (“I killed her all right.”) I’m afraid there is no defending his actions— we see news stories like this far too often nowadays, and they quite rightly inspire outrage. Dr. Armstrong was drunk and operated, and ended up killing someone. He did something heinous. There’s no defending that action.

But observe what happens next. The medical profession being one of tight lips, Dr. Armstrong gets away with his crime, without even a small suspicion attached to his name. Prior to this botched operation, his life had been headed in a downwards spiral, as he got himself involved in a vicious cycle fuelled by alcohol. Once this event occurs, he snaps out of it. He suddenly realizes what the drink is doing to him and he quits. He applies himself into his work and soon becomes well-known and highly respected. The death of Louisa Mary Clees is a tragedy, but something good managed to come out of it. Dr. Armstrong may be pompous and something of a fool, but he tries to be a decent man. 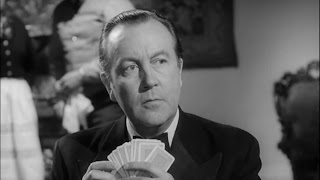 And yet, despite all the good things he’s done since then, Dr. Armstrong is haunted by guilt. On the first night on the island, he re-lives his murder in a nightmarish dream, where Emily Brent and Anthony Marston assume the role of his victim. His guilt escalates into terror, and he’s easily manipulated by Mr. Owen. And yes, his death seems to me the most horrible one— pushed off a cliff, with only seconds to realize how he’s been fooled and what will now happen to the others… it may have been only a few seconds, but what a ghastly few seconds those must have been!

I too have always felt sorry for Armstrong. His actions were wrong, but the killer’s punishment is far out of proportion to the crime he committed. Or is it? As a doctor, surely Dr. Armstrong must be held to higher standards than other members of society! People entrust him with their lives—how can he behave so carelessly and cause one of those lives to end prematurely? To that I partially agree; Armstrong should have been disciplined, perhaps struck off the medical register. If Mr. Owen could get enough proof to satisfy himself that Armstrong was a murderer, surely he could have submitted that to the appropriate committee? (But then again, Mr. Owen’s proof is very shaky at times…) Armstrong should not have gone off scot-free, but is his crime worthy of death? I think not, let alone such a terrible death. 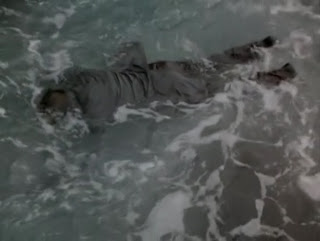 No, Mr. Owen is a liar. If he were going solely by the degree of a crime’s severity, Dr. Armstrong should have been killed closer to General Macarthur or Rogers’ death. But Owen kept him around, increasing the terror until Armstrong, who was rather a fool, agreed to a silly plan to trap the killer without thinking it through… and thus, he signed his own death warrant. Mr. Owen uses “justice” as the magic word that suddenly makes his crimes acceptable, but even he breaks his own rules. This death’s placement and method were strictly planned to facilitate Mr. Owen’s crimes and to fit that ghastly little rhyme. A red herring certainly swallowed Dr. Armstrong!