'B' is for Bernie 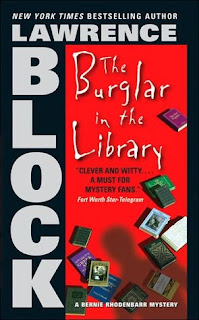 This next review was inspired by Bill of Traditional Mysteries, who reviewed Lawrence Block’s The Burglar in the Library a while ago. The review interested me—I had never read a Block and he seems to be a very prolific author of hardboiled mysteries/crime novels. I have another of his books, Eight Million Ways to Die, sitting on my shelf awaiting me to read it. But it seemed to me a little more interesting to first take a detour to the world of Bernie Rhodenbarr, bookseller and professional burglar, as he gets involved in a traditional snowed-in-English-country-house mystery!

After a relationship of Bernie’s goes sour (after all, the girl was getting married that Thursday!) the burglar decides to say “to hell with it” and refuses to cancel reservations he’s made for the weekend at an exclusive and quaint little hotel/guest house called Cuttleford House. He decides to instead bring Carolyn Keiser along, his best friend in the world as well as a lesbian. But he isn’t coming to Cuttleford House just to enjoy the fairy-tale-England atmosphere of the place… he’s there to look for a book. More specifically, a copy of the first edition of Raymond Chandler’s The Big Sleep inscribed by the author to Dashiell Hammett! Such a book, if it existed, would be absolutely priceless to fanatical collectors. And Bernie, after reading the memoirs of a forgotten pulp author, is convinced not only that the book probably exists, but also that its location is Cuttleford House.


But things get pretty awkward for Bernie when his ex turns up at the guest house with her new husband in tow… and then a body is discovered in the library! As the pyramid of bodies gets larger, the pool of suspects gets smaller, and eventually Bernie has to figure out whodunit… right? 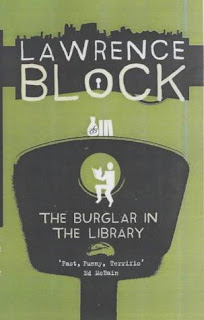 As it turns out, the book was overall pretty enjoyable. Block shows some real reverence for several writers and when he talks about them, you can practically see him lighting up. And generally speaking, he’s usually pretty fair to Agatha Christie instead of engaging in a mean-spirited “parody” like that dreadful book The Act of Roger Murgatroyd. He tends to acknowledge the good things she did in the genre and being a devoted fan of the Queen of Crime, I liked that.

The only problems with this aspect come at the very end, when Block raises the work of Chandler, Hammett & Co. on a pedestal, far above the silly little things Dame Agatha wrote. I have nothing but admiration for Hammett, but when it comes to Chandler, my views are far less kind. When Block decided to follow Chandler’s footsteps in the world of lazy plotting, I nearly threw my book across the room—but thank goodness I did not, because that would have been the end of my Kindle.

I will try manoeuvring around Spoiler Rapids to explain why I reacted in such a way without spoiling anything. Basically, Block regurgitates a mistake Raymond Chandler made in one of his books, a piece of lazy, improvised, slap-dash plotting that rarely fails to leave me furious. It might work for some books, but it really doesn’t for this. Say what you want about “symbolism” and “complexity”, it is idiotic. Block basically wastes the reader’s time with a plot thread. There was one event that threw me off the trail because it gives the whole sordid mess a different complexion altogether. Block’s explanation of this event is just plain lazy… but he uses it to extoll the virtues of Raymond Chandler!!! 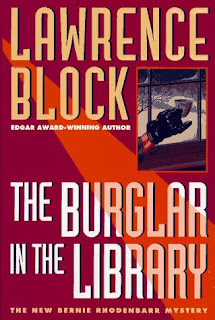 But let’s ignore that. The characters in this book are generally speaking plenty of fun, with only a few exceptions. There were a few characters – most notably, at least one of the victims – who, when they turned up dead or screaming at the dinner table, left me puzzled. I had no idea who they were! Some characters get far more screen-time than others, and although these characters are plenty of fun, it forces some others waaaaay into the background… and when you’re trying to construct a murder mystery around figures you can’t differentiate from one another, you run into problems.

When you boil it down to the basics, The Burglar in the Library is not a ground-breaking masterpiece. It’s just a fun book. For my tastes, it’s a little unfair to Christie at one point and a bit too kind to Raymond Chandler at another… but those are my tastes. There’s probably a fan of hardboiled mysteries composing a furious letter to his Member of Parliament, demanding my execution for calling Chandler’s plotting lazy.

NOTE: THE AUTHOR OF THIS PIECE HAS BEEN ARRESTED FOR DARING TO CRITICIZE THE ALMIGHTY RAYMOND CHANDLER. ACTIVITY ON THIS WEBPAGE IS BEING MONITORED. GOD SAVE THE QUEEN.

If it wasn’t for the fact that this played into the ending, I wouldn’t even bring it up, because for much of the book Block is quite fair to Christie, and the book is plenty of fun. So would I recommend this book? Sure—it’s an enjoyable romp and the Kindle price for the book is extremely reasonable. The characters (the main ones, at least) are plenty of fun and their bantering is most enjoyable. There are better books out there, but there are worse ones as well. Far worse ones …