The Previous Adventures of Sam Spade 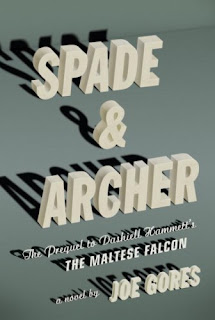 One of the reasons I recently re-read Dashiell Hammett’s The Maltese Falcon was because I wanted to refresh my memory on it. I remembered it hazily but remembered admiring it very much. Still, I wanted to re-read it so that I could go and read today’s book, Spade & Archer: The Prequel to Dashiell Hammet’s The Maltese Falcon, by Joe Gores. Published by Knopf in 2009, the reviews I saw were very kind to the book and thus my curiosity was piqued. (So it’s the same sad story all over again.)

The thing that attracted me most about Spade & Archer was its being a prequel, which I thought had far more potential than any sequel. After what Sam Spade went through in Hammett’s classic novel, further adventures might simply seem anticlimactic. What could possibly top a murderous hunt for a mysterious long-lost treasure? But prequel territory seems far better game. How does Sam Spade become the man he is? How did he form a partnership with that “son of a b!tch” Miles Archer? How did Effie Perine come to be his secretary?


Our story begins when Sam Spade decides to go out on his own, breaking off from his detective agency after finding a man he alludes to in The Maltese Falcon. Times are rough at first, but Effie Perine comes into the office, takes some initiative, and becomes Sam’s secretary. And then Sam is hired by a bank official to find his son. The son is a romantic who is likely to try stowing away on a ship bound to Australia or something of the sort. Sam goes to investigate, and accidentally stumbles over a massive heist when a lot of British currency goes missing from an Australian ship. 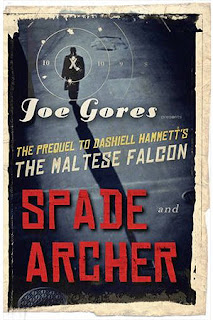 And that’s just the first case. The book is divided into three parts, each part forming its own complete whole and yet tied intimately into the other two parts. Sam Spade spends years hunting after a shadowy figure who keeps changing his name but who remains every bit as crooked. And it becomes a personal matter for Sam, who resents the idea that anyone could outwit him. He prides himself on his talent and refuses to let this Mr. X slip through his fingers.

I won’t describe the story in more detail, but I will say this much: Gores constructs a wonderful story. The book is an excellent read and the answers Gores provides to Sam Spade’s backstory are good ones. And the style, generally speaking, is not a bad imitation of Dashiell Hammett’s. Frequently, Gores will refer to events or people that are recalled The Maltese Falcon. Sometimes he reuses the same descriptions, but it isn’t done excessively so it’s fair game. (There’s also a great moment where Sam Spade passes himself off as one Nick Charles!)

But there are some awkward-sounding moments. The worst come in the third part, where Sam Spade and other characters launch into elaborate explanations about Chinese history and the Chinese Exclusion Act that was in place in order to explain what’s going on. This is when the dialogue seems the most forced and it’s jarring. In addition, Gores was an author writing in the early 21st century, a long way from the 1920s. Several perspectives in our culture have changed, and some of these make their way into the book, providing some smaller, but also somewhat jarring, moments. But I suppose that’s more or less unavoidable. I’m not going to say that Gores fooled me into thinking Dashiell Hammett wrote the book, but it’s a passable imitation apart from the moments I have mentioned. 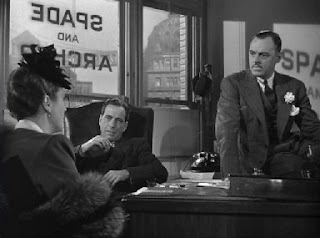 There remains only one question: what right did Joe Gores, or anyone else for that matter, have to take a classic character and write an entire book around his backstory? Depending on how you feel about such pastiches, it might affect your enjoyment of the book. In general, I dislike the idea of an author taking someone else’s characters—if your book is going to be so good, can’t you write it around another set of characters instead? But when it’s done well, I can enjoy the book. The biggest mistakes this kind of book tends to make is recycling the plot of the original or making the plot too different. Gores doesn’t do this. He comes up with a highly complex web of a plot that is unlike The Maltese Falcon… and yet some familiar elements surface nonetheless. It’s just the right blend. I really don’t want to go into detail here because it would spoil a delightful story.

Spade & Archer is, overall, a very good read. It’s highly entertaining and is most respectful of the source material. And none of these events seem out-of-place with the Sam Spade we meet in The Maltese Falcon. We don’t hear Sam’s inner thoughts as he philosophizes about how terrible the world is, or anything of the sort. As with The Maltese Falcon, even though we see all the characters’ actions, we don’t share their intimate thoughts… and just like with Hammett’s classic, the result is surprisingly fascinating!