You Reap What You Sow...

Written by Patrick
WARNING: This review contains a potential spoiler in that I give away something that does not happen when I hoped it would. However, it was impossible to describe my disappointment without this revelation. The reader is warned, but it's something that should have been obvious. 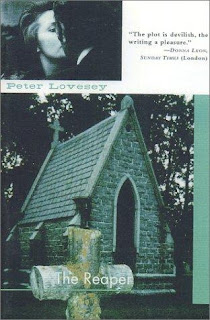 The Reverend Otis Joy is a very, very wicked man. Indeed, his bishop, one Marcus Glastonbury, discovers that Joy has been embezzling funds from the Church of England systematically, and there is a deficit of about £15,000. But Marcus Glastonbury wants to ensure there is no public scandal involving the church, and so he makes a fatal mistake. The bishop neglects to tell anyone of his plan visit to Otis Joy, coming more-or-less-inconspicuously on his day off. And so, Otis Joy seizes his opportunity and murders the bishop, making the whole thing look like a suicide. To add credibility to this theory, he makes the bishop look like a sex pervert who jumped into a quarry because of shame.

It’s a jolly start to the story in Peter Lovesey’s The Reaper, and as we soon find out, Otis Joy is not only an embezzler but also a serial killer. People who inconvenience him have a nasty habit of dropping dead and things are no different at his current parish in Foxford. But the police scoff at these stories, shared in the pub: after all, how could a man go and tell his congregation to live their life one way, and then turn around and do something completely different himself? Otis Joy is a man of the cloth: how could he be a serial killer?


And while, as a whole, The Reaper is a fairly enjoyable experience, it has some very serious flaws. Perhaps I’m the one to blame, because I set my expectations very high on the story when, after a second death, I suddenly realized something about the story. I was expecting this to turn out to be a detective story disguised as an “inverted” murder mystery—for, apart from the death of the bishop, we never actually see Otis murder anyone... and the author never explicitly tells us that Otis is the man behind these mysterious deaths! Immediately my nasty mind set to work, devising ingenious theories left and right… but I might as well have spared myself the effort. Otis is indeed a serial killer as the product description claims, and having this confirmed at the book’s end was rather an anti-climax. Can't you just imagine Anthony Berkeley using a similar plot scenario and delivering a dazzling detective story in disguise? It requires one extra creative push, and I was expecting it... but its failure to arrive was the source of one of my major disappointments. Then again, maybe I should have expected as much... 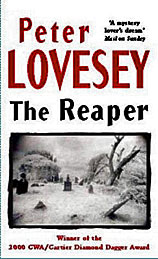 That wasn’t my only problem with the ending, though. I also felt it was distinctly rushed. The first two acts had a nice, leisurely pace to them that made for pleasurable reading. The portrait of village life was wonderful, and we see how Otis Joy’s presence morally corrupts one of his parishioners, Rachel Jansen, who begins to desire the young vicar more and more… It was very nicely done and the pace was ideal. Then in the third act, after some determined poking around by a certain character, the police do a complete about-face. All throughout the novel they have scoffed and scoffed at the stories—but when given a certain piece of evidence (which they themselves admit is far from conclusive) they suddenly side with those who denounce Otis as a serial killer. And then, through sheer stupidity and incompetence… I won’t even hint what happens. But I must say it was a major letdown.

One last quibble: the Church of England is really treated most unfairly. I’m a stubborn Papist myself, but I’m pretty sure the Church of England is not like the institution in this novel. We do not get a single decent character from the church. There’s an embezzler and part-time murderer, and a bishop who seems more interested in money than in the church itself… But where are the good priests and nuns who do good deeds? I know such people exist from personal experience, mad as the concept may seem, and it bothers me to see some poor stereotypes of what people think religious people are like. It just doesn’t ring true. 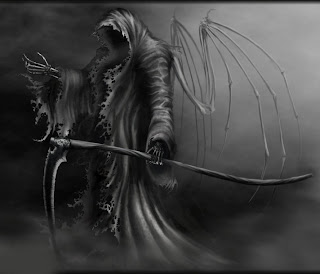 That being said, the book is fairly enjoyable as a read. There are some really great standout scenes, like the maddest funeral procession I’ve ever read about, and the vicar’s sermons on Sundays are rather fun as well (it’s as if he’s been writing these sermons for weeks in advance!). And there is a nice touch of mystery for much of the book, as Otis Joy takes Tuesdays off but nobody knows where he disappears to on those days. (The resolution is not fairly-clued, however, and feels rather random… but it’s an acceptable enough resolution.) I liked the way a certain character persists in digging for the truth at all costs, getting plenty of flack for his anti-vicar stance.

But despite all the fun stuff about this novel, it remains a fairly flawed work. As an inverted mystery goes, it’s merely average. The major problem with it is that its problems are concentrated in the last act. And consequently, much of the enjoyability of the first two acts seems negated by the disappointment of the third.