Batman, Riddle Me This! 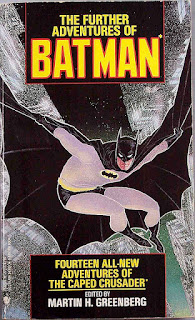 Bruce Wayne, dressed in the Batman costume at a social function, runs into Commissioner Gordon, who confides in him that the Riddler is back in town, leaving a corpse in the river with a tattoo on its chest. Before long, the Riddler strikes again, vandalising a famous painting and leaving behind another riddle. This starts a chain of riddles and crimes, as the Riddler targets the “Wise Men of Gotham”. It’s up to Batman to solve the riddles and save the wise men.

It’s the promising plot of Edward Wellen’s Wise Men of Gotham, collected in The Further Adventures of Batman. I don’t know much about Wellen, and all I could discover about him was in obituaries that informed me that he was a mystery-SF writer known for his short fiction. (Why do mystery and sci-fi writers often cross over in genres? Seriously: Anthony Boucher, Fredric Brown, Robert Sheckley, René Reouven, and now Edward Wellen!)


Unfortunately the plot doesn’t quite live up to its promise. Although I’ve often remarked throughout this series of reviews that the Riddler would be an ideal villain for a fair-play mystery, Wellen doesn’t do such a great job. The Riddler’s riddles are suitably complex for the character, but they come at the expense of the clues. It’s practically impossible to figure out what his riddles are about until the crimes they allude to are committed. Everything from word play to anagrams to ambiguous references make their way into these riddles, and so while you’re busy trying to figure out what a wagon has to do with a strawberry, it’ll turn out that the Riddler was actually talking about Wagon Wheels, and since they’re both dessert-y items, the next crime will take place in the new Two Desserts Night Club that you’ve never heard of before (and which has an incredibly stupid name).

That’s another problem: the author pulls details about Gotham City and its inhabitants out of a hat whenever the plot requires a new twist. It turns out that Gotham City is named after a Gotham in England and that there are legends about that place that influence the Riddler’s crime spree. There’s also a final mind-blowing twist about the killer of Batman’s parents, but it really makes no sense and instead comes across as rather silly. 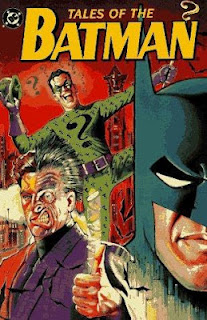 Not as silly as the ultimate plot twist, however, which was fairly clued, but had some of the most heavy-handed clueing I’ve ever seen in any story. Batman might as well have walked by the culprit in the act and waved to him, because that’s how bad it is.

But for me, the absolute killer is the “comic relief”. The author keeps talking about what a poor state Batman’s outfit is in, and Alfred fusses over it and worries about how terrible it looks and how Master Wayne just isn’t presentable. Number one: that isn’t like Alfred. Number two: it’s mildly amusing the first time, but by the third it becomes excruciatingly annoying.

Unfortunately, Wise Men of Gotham is the first real dud of this series. It fails as a mystery because it invents details as it goes along and the few clues it does drop are extremely obvious. It fails as a Batman story because it isn’t true to the characters or the details as we know them from the comic book. (And I’m not talking about minor points from little-known issues; I’m taking major points about characterization and major events in Batman’s life.) Robin makes it into this story but he’s shoehorned in at the end and his role feels pretty much pointless.

I’m afraid this is one story I just can’t recommend to either the mystery fan or the Batman enthusiast.