Written by Patrick
“Today I do some real sleuthing. In a deerstalker, I suppose. Wonder if Holmes ever did? Stalk a deer, I mean.”
—Thackeray Phin, By an Unknown Hand (by John Sladek) 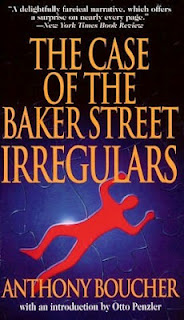 Anthony Boucher’s The Case of the Baker Street Irregulars is a delightful book full of wit, but at the same time it is an incredibly frustrating mystery. Boucher, a prolific author, critic, and editor, was also a big Sherlockian and this really shows in this book, which I own in a highly attractive Gregg Press edition. Although it does not star his usual detective, Fergus O’Breen, it does connect to O’Breen in that his sister is a major character, as well as a police officer who appeared in The Case of the Seven of Cavalry.

[Note: This review is far overdue. This is because on the day I originally planned to release this review into the wild, TomCat had just written a review of Boucher’s The Case of the Crumpled Knave. I decided to push back the review due to the extremely similar content.]

When F. X. Weinberg of Metropolis Pictures set out to adapt the Sherlock Holmes story The Speckled Band into a film, the reception was initially enthusiastic. After all, it is a great story for adaptation and Conan Doyle himself said so. Unfortunately, Sherlockians everywhere suddenly turned against Weinberg when he hired the hated Stephen Worth to write the screenplay.


Nobody worse could have possibly been chosen for the job (with the possible exception of Michael Bay, who wasn’t around yet). Stephen Worth has expressed absolute hatred of Holmes and his stories, and he vows with his screenplay that he will “toughen up” the Great Detective and show his lily-livered followers just what a real detective does. As the author of several hardboiled detective novels and an ex-private eye himself, Worth seems like the ideal choice to butcher the source material.

Suddenly, F. X. Weinberg finds himself branded Public Enemy No. 1, and when he tries to get rid of Worth, the screenwriter points out a clause that says that if he doesn’t write the script, nobody will. Finally, to appease the Baker Street Irregulars, F. X. Weinberg invites a delegation to come to Hollywood to serve as unpaid consultants. The invitees eagerly accept, and the stage is set for murder: for not long after he crashes the welcoming party, Stephen Worth is found shot. But then his corpse disappears and the Baker Street Irregulars all find themselves involved in adventures that could have come straight from Conan Doyle’s pen… This sounds like a job for Sherlock Holmes himself! But since he isn’t around, the Baker Street Irregulars will have to do. 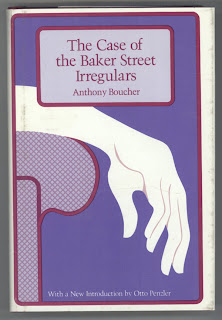 This book is truly a delightful read for the Holmes fan. You will find all sorts of great references to the Canon, such as a police officer named Sergeant Watson who must guard over the house in which the Irregulars are staying. And the next day when their adventures take place, they all have multiple connections to the Holmes Canon and the untold stories Watson alluded to, such as the adventure of the tired captain or that of Colonel Warburton’s madness. These are witty and wonderful, and they form the most delightful part of the book.

Unfortunately, as delightful as the book is, it quite simply falls apart by the ending. This is a book that logically makes little sense. There’s a huge paradox that you simply cannot ignore about Stephen Worth— and as much as you try to forget this gaping hole, the book won’t let you forget it, making it an integral part of the solution. There’s no reason why half the people involved should have acted the way they did. There are inexplicable masquerades that are apparently orchestrated by the same person even though multiple ones take place at the exact same time in different parts of town... There’s the ever-so-convenient aspect of motive, which brings up an entirely new plot hole: how the devil could P.I. Stephen Worth uncover dirty secrets single-handed, but these same secrets eluded the efforts of the entire LAPD???

And yet, not even this lack of logic makes for a surprising solution. Half of the ‘twists’ are painfully obvious despite the fact that a sieve holds more water than these revelations. You get sudden, dramatic reversals of character, and a killer who could have very well been anybody else with just a bit of tweaking. That’s not a sign of a strong detective novel.

The book’s saving grace, then, is its wit and the charm of all the Sherlockian references. As much as I enjoyed The Case of the Baker Street Irregulars, I had to swallow a very convoluted and fundamentally flawed mystery. While it’s a fun book, it’s of far more interest to the Sherlockian than to the casual mystery fan. If you absolutely love Sherlock Holmes, you will probably enjoy this book for the Sherlockian references. But if, like Worth, you can’t stand the fellow, or even if you are casually indifferent, your reaction could end up being very different.

The reader is warned.