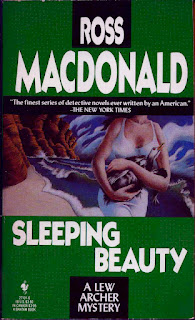 Oil spills are nasty. The oil doesn’t dissolve in water, which is why an oil slick forms, and it pretty much kills life in that area. Worse, they can take a long time to fix—it isn’t a simple mop-up job. Oil spills can cause millions of dollars worth of damage, permanently alter an entire ecosystem… and in Ross Macdonald’s Sleeping Beauty, it starts to rip a family apart.

This is no regular family—this is a family that is incredibly rich thanks to the oil industry. But one member of this family, Laurel Russo, seems personally affected by the oil spill. Lew Archer, private eye, finds her on a beach, contemplating the spill and mourning a dead bird she was unable to save. He takes her to his apartment, where she phones her husband Tom. But Tom, a pharmacist, is about to go to work and explains that he cannot pick Laurel up. Suddenly, something snaps. Laurel leaves Archer’s apartment with Archer’s Nembutal pills, more than enough to kill herself. But suddenly, a ransom demand is made, and it seems like this might be a kidnapping case. It brings back echoes of an earlier case and an unsolved murder in the past... and things get a whole lot more serious when a dead body washes up on shore and violent anti-oil protests commence. In the midst of all the chaos, Lew Archer must find Laurel before she takes the pills or before her kidnapper does something violent… and if that happens, this princess will have embarked on the Big Sleep. 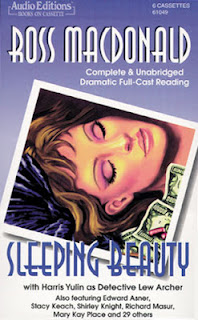 The one flaw that critics of Ross Macdonald keep pointing out is that he kept writing the same book over and over again. Sleeping Beauty contains many of Macdonald’s favourite themes—analyzing how a family is torn apart by a devastating event, the loss of a child (here, a daughter—remember that Macdonald himself lost his daughter in real life), a child who lost his parents at a young age, violence from the past returning to haunt the present, etc. But in my humble opinion, what is wrong with writing the same book over and over again if you can do it this brilliantly?

The great success of Sleeping Beauty is found in the characterization. These are all such real people. They have emotions. They have their faults. They love each other yet cannot fully comprehend each other. You get to like pretty much everyone, and the series of unfortunate events that unfold throughout the novel make you sympathize for these people. So much tragedy occurs in such a short space of time that you wonder how on earth they’ll be able to pick up the pieces and move on once everything is done. 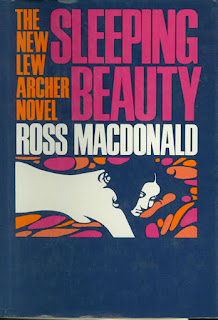 It’s also interesting that Sleeping Beauty contains a pretty balanced view on the oil issue. It hasn’t died down since the book’s publication in the 70s; if anything, it’s more pronounced. Memories of the BP oil spill are still vivid in our minds, I would imagine. In this book, crowds appear on the docks with signs, protesting against the oil business and making threats to people connected with the oil company that has just spilled oil into the ocean. But who is really responsible? One person is made the culprit by the general public, but Macdonald isn’t quite satisfied with that. He gives you a detailed portrait of the man, and you see all the stress that has been piled on him. Yes, he’s made some mistakes that have led to the spill, but he isn’t an evil pirate out for millions of dollars, he is just a flawed human being like the rest of us. And the crowds don’t help, either, blocking the delivery of crucial supplies that are necessary in an attempt to plug up the oil leakage. One of the book’s most intense scenes, in fact, is an emotionally-charged anti-oil demonstration which might, at any second, ignite into a full-blown riot. Macdonald himself was rather an environmentalist (and so is Lew Archer, for that matter) but it’s fascinating that the author could give this question such a balanced approach instead of turning this novel into anti-oil propaganda. After all, everyone uses the oil that they’re suddenly so upset over, now that it’s been spilled. 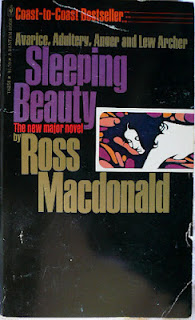 But how is the story itself, the mystery? Is it worth reading for that? The plot twists and turns, and there are so many complications and revelations that I can hardly remember them all. It’s all wonderfully done and keeps you very excited— and because Lew Archer has very little time to spare, it’s all a race against time. Unfortunately, the ending really ruins the effect that Macdonald has been building up. Finally, everything seems explained… but then, the real killer makes a slip of the tongue, babbles a bit about how it’s not really my fault that I killed these people, and then promptly commits suicide. Psychologically it makes sense for this character to have reacted how they did, but it’s not a satisfying conclusion. It leaves you scratching your head, wondering at what point in the story there was any hint that so-and-so had done it. I couldn’t think of any, and that’s the book’s most serious let-down. It feels like a pretty arbitrary conclusion, and because of the enormous stress the family’s gone through, you can pretty much replace the killer’s name with anybody else’s and still get more-or-less the same ending.

But despite that major reservation I would still recommend Sleeping Beauty. It’s got some of Macdonald’s best characters, and although the plot ends with a whimper, the build-up is absolutely terrific and excellently-paced. There are plenty of tremendous scenes full of emotion, and the near-riots caused by the oil spill are absolutely nail-biting. Overall, it’s a book worth reading, especially if you like Ross Macdonald and Lew Archer.