A Deed of Dreadful Note 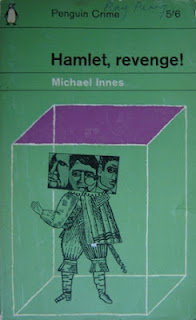 The scene of the crime is Scamnum Court, seat of the Duke of Horton. As for the crime itself, it is one of the most bizarre in all of detective fiction. Someone has shot the Lord Chancellor in the middle of a production of Hamlet. The Lord Chancellor was playing the part of Polonius in a production that attempted to reproduce Hamlet as it would have been originally performed. So when Hamlet is supposed to stab Polonius through an arras, a gunshot sounds. When “Hamlet” reaches the curtained-off rear stage, he finds “Polonius” very much dead of a gunshot wound, the weapon nowhere in sight.

In due course, a document vital to national security goes missing, and so the Prime Minister himself asks Inspector John Appleby to investigate the goings-on at Scamnum Court. And investigate he does—it turns out to be a complex case. The killer took several foolhardy risks, but all of them seem to have paid off! Are there accomplices? Was the killer working alone? And when a second murder takes place, suicide seems most unlikely indeed… 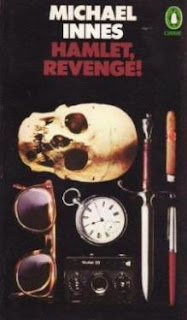 And that is the story of Michael Innes’ Hamlet, Revenge!, one of the most surreal, bizarre mysteries I’ve ever read. Then again, Innes sort of specialised in the bizarre. I loved my previous Innes read, Death at the President’s Lodgings, so I really looked forward to this book. It seemed everyone was calling it a masterpiece of detective fiction, and although it’s a really good read, I wouldn’t quite put it into the masterpiece category.

This is for one major reason; the list of characters is so enormous that I kept losing track of them. There are almost thirty suspects total, and I had a very hard time remembering who was who. I remembered the central characters well enough, including the eventual culprit, but there is a false solution presented first and I had completely forgotten about the existence of the character who is cast as the culprit in the false solution. For most of the remaining characters, the most I could remember about them was who they played in Hamlet (although in many cases, I couldn’t even remember that much— imagine my embarrassment when, at the climax, I had to look back at page 60 to remember who character X, who had just saved our heroine’s life, was playing in Hamlet). I also had an easier time remembering the side-characters who had no bearing on the mystery—people who would show up as comic relief every once in a while, like Mrs. Platt-Hunter-Platt.

Another caveat: the book has some minor flaws as a mystery. For instance, we’re never given a solid reason for the second murder victim to have behaved as foolishly as he did. And although an attempt is made to explain this in the fake solution, it’s never brought up in the real solution, leaving me confused as to whether we should accept the explanation of the false solution or not. 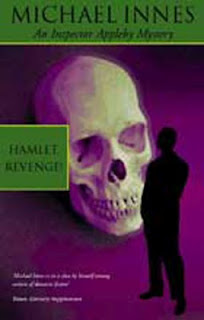 In general, however, Hamlet, Revenge! was an excellent read. This book is delightfully intelligent, and the whole surreal atmosphere is most appealing. I really liked seeing John Appleby again, and the book is deliciously witty, especially in its conversations between Giles Gott and Appleby. And there are some neat moments of deduction at the solution. The slip that gives the killer away is one of the better ones, and there’s also a moment of sheer genius at the end where our heroine improvises a brilliant way of hiding from the culprit.

Hamlet, Revenge! contains just the right stuff for the Michael Innes enthusiast. There are plenty of surreal occurrences and crazy characters. However, due to the sheer number of characters, I personally found it hard to keep track of them and most of them just blended into each other. In my edition of the book, I had to keep referring to pages 59 and 60 to remind myself just who the devil these people were. Although the mystery has some smaller points that really could use clarification, the solution stands at the end of the day and contains some impressive elements of deduction, including an impressive false solution (if you can remember that character Z exists to be suspected, that is). If you like Michael Innes, you will like this book—and I enjoyed it tremendously. However, I’m not quite convinced that it belongs in the “masterpiece” category.

Note: The strangest moments in the book involve the name of a character: Gervase Crispin! It would seem like this would be a reference to Edmund Crispin and his detective Gervase Fen, but the chronology is wrong for that, since Crispin's debut mystery (The Case of the Gilded Fly) wasn't published until 1944, and Hamlet, Revenge! was published seven years earlier in 1937. Is it conceivable that Crispin named his detective partially after Dr. Gideon Fell, while also making an allusion to this novel?