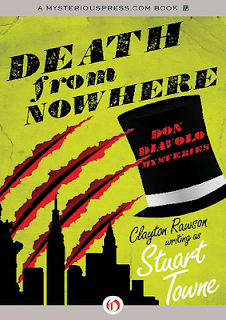 Clayton Rawson was a magician, and so naturally, when he wrote mysteries he created a magician detective, The Great Merlini. I believe that Merlini’s first appearance, in Death from a Top Hat, is one of the all-time great fictional debuts. The book is a masterpiece, pure and simple, and understandably, Merlini’s career was all downhill from there. I’ve already reviewed a short story collection of Rawson’s on this blog, in which his Great Merlini tales were brought together. But did you know those aren’t the only short works Rawson wrote? In fact, he also wrote four novellas as “Stuart Towne” starring Don Diavolo, The Scarlet Wizard.

The novellas, as well as all of Rawson’s novels and stories, have been brought back to life by MysteriousPress.com, and I cannot recommend them strongly enough. These e-books are absolutely gorgeous by e-book standards, with excellent formatting, editing, proofreading, etc. And so today, I’d like to share with you my thoughts on the novellas found in Death from Nowhere.

But before I do, I’d like to tell you my one reservation about the collection. There are plenty of terrific images throughout these two stories, but on two occasions, a full-page image illustrated a crucial event in the story… chapters before they happen! It never ruins the method behind seeming impossibilities and doesn’t quite ruin the culprit, but it does tell you that Don Diavolo will have to do such-and-such sooner or later and so you do anticipate, for instance, Diavolo’s way of evading police surveillance at a circus. When I contacted somebody about this issue, I was told that the Rawson estate apparently prefers that layout. I cannot imagine why, unless it has something to do with the original magazine publication’s layout.

Claws of Satan
R. J. Hagenbaugh, manager of a circus, could be a very difficult man to work with. But today, after getting an angering telegram, he sends back an uncharacteristic response and goes back to his office. A while later, Don Diavolo walks in, and knowing that Hagenbaugh won’t want to see him, he slides his way past the man’s secretary with a combination of ventriloquism and impersonation skills. That makes things very awkward for Diavolo when he gets knocked out upon entering the office, only to be discovered with Hagenbaugh’s corpse!

This story is suitably mysterious, and what makes it work are all the various impossibilities throughout the story. Watch in particular for Diavolo’s way of escaping police captivity from an elevator, followed by another daring escape at a circus. There are plenty of terrific deductions throughout and false solutions a-plenty… and unfortunately, one of the false solutions is a lot more interesting than the real one. In fact, the real solution to the original locked room problem is rather underwhelming. But despite that flaw, the story is really worth reading, showing much ingenuity in its false solutions and the improvised escapes of Don Diavolo.

The Invisible Dagger
Don Diavolo is paid a visit by Mr. Nicholas Sayre, “a crusty, blustering, opinionated old codger with a deep-seated distaste for magicians”. Sayre has unearthed a man whose talents could only be the result of the supernatural. His name is Shivara, and he claims to be an Indian mystic. And he performs some truly fantastic feats—he manages to project an astral double into the chair beside him, for instance, and he can disappear on cue. He can also move objects without touching them, apparently by the power of his mind. Not only that, he offers to do these tricks to anybody, even Don Diavolo!

A lot of good tricks, and things are made complicated by the usual stuff, like an archaeologist returning from the dead and a dagger that stabs another man apparently of its own free will. There’s also the impossible disappearance of a corpse from a hotel room, and Inspector Church as usual vows to get Diavolo’s head on a plate.

Overall, this is a terrific story, but the solution hinges on a very farfetched point. You have to be willing to accept this one point for the entire solution to work, and when I first read the story I refused. But I re-read the story, and thought about it some more, and much to my surprise, the more I think about this solution the more I like it. In the context of this particular story, it just seems to work.

Overall, I really enjoyed Death from Nowhere. The stories are creative and imaginative, and although there are flaws, the book still manages to be quite enjoyable. As usual with MysteriousPress.com, the editing and proofreading are terrific, but in terms of layout, an odd thing happens with two full-page images that I have already talked about. (This, however, seems to be the wish of the Rawson estate.)

So if you have a Kindle (or any other preferred e-reading device) and want to immerse yourself in tales of mystery and magic born of a twisted imagination, Death from Nowhere is your ticket. With these stories, the main impossibilities are interesting, but often just as interesting are the deceptions that Don Diavolo has to quickly improvise to get away from the police, or in one case, the criminal! For instance, could you evade arrest with nothing more than someone else’s hat?

Links: Here is the Clayton Rawson bio page from MP.com, which features a terrific photo of the author mid-card trick! You'll find links to all of MP's editions of Rawson's books there.

You can find links to Kindle, Kobo, Sony, iTunes, etc. editions of Death from Nowhere at this link.