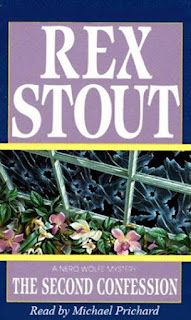 To set the plot of The Second Confession in motion, James U. Spurling, a wealthy industrialist, comes to Nero Wolfe’s brownstone and hires the famous detective to do a bit of tricky work for him. Spurling is convinced that his daughter Gwenn’s suitor, Louis Rony, is a Communist. Spurling asks Wolfe to prove this, but Wolfe decides it would be simpler to look for evidence that will convince Gwenn to drop Rony. And so, Archie Goodwin is sent down to the countryside to get some fresh air and do some undercover sleuthing.

But before you know it, Nero Wolfe gets a telephone call from Arnold Zeck, who introduced himself in the previous book in the series, And Be A Villain. Zeck demands that Wolfe cease the investigation, and when Wolfe refuses, Zeck arranges for some armed goons to shoot up Wolfe’s brownstone, completely destroying the plant rooms. This means war, and Nero Wolfe reacts to this threat by breaking one of his most sacred rules: he steps out of his house.

But before Wolfe can roll up his sleeves and prepare to bring down Arnold Zeck, something unfortunate happens to Louis Rony, who turns up as a fresh corpse. This changes matters considerably, and Wolfe must clear his and Archie’s name while bringing Rony’s killer to justice.

The Second Confession is the second novel of Stout’s famous “Arnold Zeck trilogy”, and it’s a good one. Arnold Zeck is far more prominent than he was in And Be A Villain. In the first book, his presence was more or less a cameo—in this book, his presence is far larger, although the actual “screen time” he gets is relatively minor. He still manages to play a pivotal role in the plot, however, so this isn’t a blink-and-you’ll-miss-it apperance. 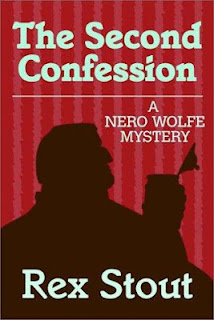 As a story, The Second Confession works quite well. It’s got an unexpected ending, which usually isn’t Stout’s forte. The clueing could have been a bit better, but the plot works as a whole, and the main reason clues aren’t so great is because they’re mainly the type of clue that you, the reader, cannot use— photographs form the most important evidence. Archie finds out who the culprit is far before the reader thanks to this, but he decides to play the old trick of withholding the name from you until the last possible moment.

As usual, Archie is in splendid form as a narrator, with plenty of wisecracks along the way and guiding us through a very tangled web of plot. His narration is crisp, clear, and extremely entertaining, and there are several quite funny moments in this book. I particularly liked Archie’s portrayal of the police officials who show up in this book and will reappear in the follow-up, In the Best Families.

I don’t want to give too much of the story away, so perhaps I should stop there while I’m still ahead. The Second Confession is a good novel and, dare I say, one of the better ones. It isn’t quite at the same level as And Be A Villain, in my opinion, but it’s still highly readable and entertaining, and the ending really is quite unexpected. But it all makes sense by the end and forms a complete package. Plus, it’s always something of a shock when Nero steps out of his house to trap a killer!