What a Trick!: The Tricksters Return

Written by Patrick
Back in April, I reviewed the entire first season of the Japanese TV show Trick. I found it a delightful series. Although the plots often came with more holes than Swiss cheese, the comedy was fairly decent and the chemistry between the two leads was absolutely terrific. And so it was just a matter of time before I got around to season two. 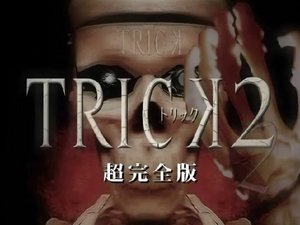 Overall, I thought season two was a major improvement over the first season. There are still plot holes, but these aren’t quite as jarring as those from the first season—and to be honest, it forms part of the series’ charm. The subtitles also markedly improved, and so I got to appreciate a lot more of the jokes. The production design also improved—season one at times looked like a low-budget 70s TV show. Season two now feels like an okay-budgeted 80s TV show. (Okay, pardon the bad joke.) Finally, the stories in season two have got even more intriguing premises than those of season one, and in general, the plots are a lot more satisfying. Plot-wise, season one only had a few minor successes. Season two, on the other hand, is mainly composed of successes.

Some things have changed in season two. Professor Ueda is now well-known, with a successful TV show and a bestselling book called “Come Over, Spiritual Phenomena”. Naoko Yamada, meanwhile, is still at the same apartment with the same landlord, and she still performs magic tricks. Only now, she resents how the Professor keeps taking credit for the cases she helps to solve. The two police officers, Yabe Kenzo and his assistant Tatsuya Ishihara, play bigger roles than they did in the first season, and continue to admire Professor Ueda while showing nothing but disdain for Naoko.

Keep in mind that my plot summaries will try to avoid spoilers, and so I won’t describe many of the scams that are exposed on the side. The episodes really like that kind of thing, where a psychic or medium or whatnot will try to prove their authenticity with a bold trick. Describing them all would be a major chore, however, and would probably make this review far too long. So, without further ado, here are my thoughts on season two of Trick.


Episodes I-III: The Village of the Six Graves
A man comes to the now-famous Professor Ueda for help. He is the proprietor of a hotel in the Mutsuhaka Village, a small village in the mountains of Japan. And he has a serious problem: every year on January 11th, a guest at his hotel dies! And these are deaths from various causes: lung cancer, car accident, cerebral haemorrhage, heart attack… It all seems to be due to an ancient curse placed by six warriors who were murdered by local villagers. And so, Ueda decides to come to the hotel, and recruits Naoko to help him out.

There are plenty of people at the hotel, funnily enough, including an extremely short politician, his extremely tall assistant, a best-selling mystery author, her assistant, an assortment of crazy locals, and our heroes. But when January 11th rolls along, Sadako Kurisu, famous mystery author, is found dead in her locked room—an impossible crime!

Before you know it, there are hauntings galore, more death threats, and midway through episode III, the story arc is completed. (The second story arc starts after this one ends, also during episode III.) While this first story is definitely enjoyable, it’s flawed. Some of the tricks are fairly obvious and the central locked-room mystery is underwhelming. A second apparently-impossible crime is equally obvious to spot. And when everything is unveiled at last, the overall plot is rather underwhelming.

However, I can’t help but liking the episode for the simple fact that I caught a few references to The Village of the Eight Graves, a famous Japanese detective novel by Seishi Yokomizo. It hasn’t been translated into English yet, but I do have a French translation handy and I hope to read it one of these days. Still, it’s great to be able to spot these references.

Episode III-V: The 100% Fortune-Teller
Yoshiko Suzuki is a fortune teller. In fact, she’s a damn good one—everything she predicts comes true! For instance, if she tells someone to turn left and they turn right instead, a dreadful accident tends to befall that person. The accuracy of the fortune teller is such that Professor Ueda is soon on her trail, and he naturally enlists Naoko’s help.

This doesn’t end up going well, however. Naoko deliberately ignores the fortune teller’s advice, and as a result, Ueda disappears. So Naoko ends up going to the fortune teller’s “retreat centre”, accompanied by detective Yabe. There, she explains several of the fortune-teller’s seemingly-impossible feats, such as a videotape she filmed in front of a digital clock that displayed the date, in which she makes several correct predictions about the future.

But the kaka soon hits the proverbial fan, and the fortune teller seems to get away with murder, practically in front of Naoko’s eyes! But there is no corpse to be found… Naoko meanwhile tries to convince her fellow residents that the fortune teller is a fake by setting up her own shop… All this leads to a final showdown, a literal duel to the death!

This is a terrific episode, which manages to explain several impossibilities beautifully. Although the non-Japanese viewer is at a serious disadvantage for the trick of the disappearing corpse, the story is a solid one overall… and there is a final twisteroo to this episode that is absolutely haunting…

Episode VI-VII: Psi Trailer
This is the series’ masterpiece thus far. It’s an excellent tale in which Naoko and Ueda attempt to debunk a “psi trailer”, a man who claims to have psychic abilities and who can trace the pattern of people’s consciousness. So a challenge is issued—several young women have disappeared over the last few years, victims of a phantom taxicab. The psi-trailer is asked to find the women… and, much to everyone’s shock, he leads the police right to the corpses!

Several more mysterious occurrences take place in this whizz-banger of a story, including a particularly nifty and effective locked-room murder. The motives behind everything are terrific, and plot-holes don’t ruin the episode. It’s a complex plot and one that leaves you feeling rather satisfied—the entire series seems to have been building up to this, and boy, it’s worth it!

Episodes VIII-IX: God’s Damnation
The villain of this episode is merely a child, but he claims to have phenomenal powers. His mother and grandmother support his claim: they say that this child can make an appeal to God to damn someone, and that person will die. Nothing can save them— they are effectively doomed. When an attractive young girl appeals to Professor Ueda to stop the child, the prof can’t bring himself to say “no”… and so he pays a visit to God’s messenger for himself!

This plot idea is oddly reminiscent of Agatha Christie’s The Pale Horse, down to the charade of needing a personal item that belongs to the prospective victim. But the resemblances are superficial, and the ending is completely different from Christie’s. It’s a satisfying ending, and a few tricks are nicely explained away throughout the episode. The story also ends on one of the series’ most disturbing notes when one of the characters suffers a major mental breakdown.

Episodes X-XI: The Haunted Forest
Nobody has come out of the forest alive, the villagers claim. It has been placed under a curse by an evil sorcerer! Sounds like a perfect opportunity to investigate, and so Professor Ueda and Naoko join an expedition in the supposedly-haunted forest. But several mysterious things begin to happen—the explorers discover a mind-reading rock, for instance. There is a hole in the rock, and if a liar places their hand inside they will be burned! There’s also a coffin that brings the dead back to life! And an omnipresent sorcerer who sings at night… in fact, there’s a lot going on!

Unfortunately, for a plot this complex, the resolutions are not always so great. The resurrection mystery is actually quite easily solved, and because of this one obvious trick, pretty much the entire game is given away. As for the mind-reading rock, that explanation is very anticlimactic. And then, not everything is explained: for instance, we never do find out why everyone in the forest suddenly starts growing a lot of hair on one part of their body. And there’s a lot of random events that are never explained, to the point where you wonder whether the sorcerer is a hallucination or an actual sorcerer! The whole thing ends on a silly showdown which basically only drags things out a little longer. It’s an okay episode, but the premise showed so much promise that when it fails to deliver, it’s disappointing.