The Amazing Adventures of Shell Scott 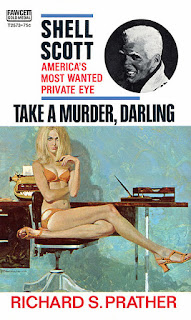 The opening to Take a Murder, Darling is one of the most memorable ones I’ve encountered this year. Shell Scott has already been on the case for a while, but he opens on a glimpse of the action yet to come. First he describes an alluring woman… which turns out to be merely the statue of an alluring woman. And then comes the description of the corpse:

He was dead, all right. He had been shot, poisoned, stabbed, and strangled. Either somebody had really had it in for him or four people had killed him. Or else it was the cleverest suicide I’d ever heard of.

Sounds like just the kind of crazy case Shell Scott would get himself involved in! And so we find out how Shell Scott got to be standing by a deader-than-dead corpse: the whole thing started when Shell was hired to take care of a few jobs for Mamzel’s. Mamzel’s is starting to turn into quite the large chain—it’s something like a women’s physical fitness centre, but the object of the program is basically to make women’s bodies perfect through exercises and other such things. So poor old Shell must suffer the sight of hundreds of women bouncing around in minimal clothing, getting their bodies into shape. 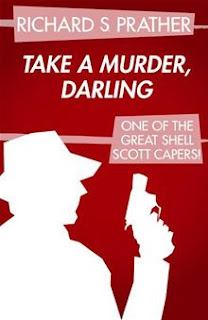 But fear not! Our private dick will soon leave these horrors and go into the mean streets outside, where he faces a tough gangster intent on cutting himself a slice of the lucrative Mamzel’s pie. And then, there’s the dead girl with the list of names in her pocket, each name connected to Mamzel’s. Add a couple of colourful characters – like a sadistic fashion designer or Mamzel herself – and you’ve got yourself a wild, 160-page ride!

Shell Scott is one of the most likeable PIs in detective fiction—at least, of those that I’ve come across. It’s just his tough luck that he keeps getting involved in rather comic situations. Luckily, he’s a good-natured sort of guy, and he’s got a sense of humour, so that makes him pleasant company even when he’s desperately trying to avert his gaze from the hordes of exercising women, complaining that the sight is just too much, even for a man who likes looking at women.

The other characters of Take a Murder, Darling are also quite fun, but the true villain of this piece might very well be a fashion designed named Horatio Adair. Maybe he’s the culprit, maybe he isn’t, but the author tears this character to shreds mercilessly. Adair is something of a sadist, speaking in a fake French accent about how fabulous his clothes are and how brilliant a genius he is. Meanwhile, he tries passing off the ugliest clothes as the hottest new trends… and somehow he gets away with it, as millions of women all over the globe will trample each other to death to get the latest piece of Adair fashion, no matter how ugly and unflattering! Few characters are as evil as Adair is when he suddenly drops the act and gleefully tells Shell that even if the women do not like it, they will still wear it. If anything, the world of fashion has only gotten worse these days. That being said, although Prather obviously holds Adair and his ilk in contempt, he doesn’t make them truly evil but he mocks them mercilessly, and somehow that’s just as bad in his hands. (Another memorable bit of satire occurs in an advertising office.) 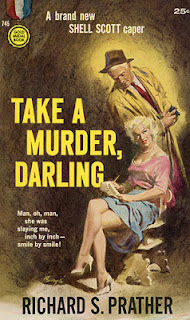 Much to my surprise, within all this madness there is a mystery to be solved, and it’s even fairly clued - a far better mystery, in short, than the one in Strip to Murder, although that book wins in the comedy department. Granted, one or two pieces of information come very late, but some things should be significant from the get-go. In fact, I’m rather afraid I solved this one without any trouble, but I still enjoyed the crazy ride that it took to get there. It’s a good sign when, even if you’re convinced you know whodunit early on, you read on purely for the pleasure of reading on.

If you want a good, entertaining, light read, you really can’t do much better than Richard S. Prather. Take a Murder, Darling is a solid entry into the Shell Scott series and is just a blast to read. It has its funny moments, and its tense moments, but the plot is well-executed, the characters neatly drawn, and it all makes for compulsive reading. In short, it comes recommended, especially if this sort of stuff is in your league.