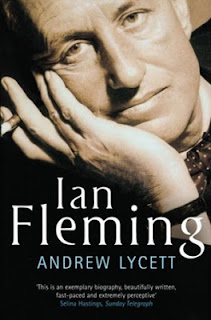 James Bond is an international phenomenon. I nominate that sentence as my contribution for the coveted Understatement of the Year Award. When Skyfall, the 23rd Bond picture, was released last year, people flocked to the cinemas en masse, and as a result the movie generated over $1 billion in revenue. It’s amazing that a character whose exploits were first published in 1953 remains relevant to this day, and all this was the product of Ian Fleming’s fertile imagination.

I’ve read almost all the Bond novels – You Only Live Twice is the only exception – and I’m a big fan. But I knew nothing about the author, Ian Fleming. What was he like? How did he get the idea for Bond? I had no idea. All I could tell you was that he was British and that his Jamaican house was called Goldeneye. As readers of my blog might recall, I decided that in 2013 I would read all of Fleming’s Bond novels. But to do this properly, I felt it was best to first learn more about Ian Fleming. And so I picked up Ian Fleming: The Man Behind James Bond by Andrew Lycett.

I have walked away fairly satisfied from the book. I know a lot more about Fleming than I did before. I think I have some interesting context with which to consider the Bond novels. For instance, when I originally read the Bond novels, I was never aware of their controversial past. It’s been brought to my attention in the last year that Fleming was often considered a British Mickey Spillane, but until now I had no idea just what kind of critical thrashing Fleming got for his books, which are pleasant, entertaining reads. He was vilified by critics as representing the decay of British society, portraying perverse morals and values. Reading the quoted reviews, I was utterly shocked when I realized that you could substitute “Mickey Spillane” for “Ian Fleming” and you’d get very much the same piece of writing. As loved as Bond is, there was something in those original novels that got some critics’ blood boiling. 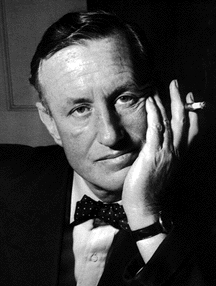 Unfortunately, Andrew Lycett doesn’t really go into those details. Although his book is rich in biographical details on Ian Fleming’s life, it really avoids looking into the enduring appeal of the Bond novels, which is odd. I put down the book wondering why exactly Lycett had written it. Was he a fan of the Bond books? The movies? Was he just commissioned to write about Fleming and treating it like an ordinary job? I couldn't really pin it down. The only really major discussion of the novels was about Casino Royale, where Lycett pointed out how Fleming had captured the changing morals and values of society, and how he played around with some of the English thriller’s conventions. But after that, the novels are discussed in a fairly cursory way, with one or two exceptions (such as the extremely controversial The Spy Who Loved Me, which needed to be examined in detail, and Thunderball for its legal controversies).

Perhaps this approach reflects Fleming’s own attitude. Later in his career, he would refer to the Bond stories as amusing, but inconsequential, stories but those early novels seem to be showing a more serious purpose at times. At any rate, it may be thin on literary details, but at least Lycett’s book has filled in some serious gaps in my Bond-related knowledge. Some of these gaps were so immense that I’m embarrassed to admit to them! For instance – and this is positively humiliating – I had no idea what kind of complex legal battle was waged over Fleming’s novel Thunderball. I remember reading it for the first time (immediately after The Spy Who Loved Me) and noticing that it was apparently based on a screenplay Fleming and some others had come up with, but I had no idea about the legal battle that ensued over the novel and that this was why we got a non-EON Productions Bond film: Never Say Never Again. Lycett analyzes Thunderball pretty thoroughly to try and sort out just who came up with what ideas, but the conclusions are unfortunately somewhat vague. 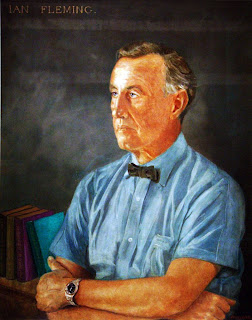 But isn’t that why we read non-fiction: to learn something new about a certain topic? I confess that after reading this book, my conception of Ian Fleming is radically different. Though a spy in real life, Fleming’s career in the diplomatic service was not nearly as glamorous as James Bond’s—although after the fall of France, Fleming memorably convinced the German airline Lufthansa that they had a duty to fly him from France to Spain. Either way, you cannot simply sum up Fleming as a real-life counterpart to his character. His character was not always a pleasant one to contemplate, especially a rather nasty sado-masochistic streak. But that doesn’t take a thing away from his accomplishment: he gave the world James Bond. Ian Fleming was a complex man, the kind of man you just can’t sum up in a paragraph.

I recommend the book to fellow Bond fans, and those who don’t know much about Ian Fleming. Andrew Lycett paints a fascinating portrait, with such side characters as Noel Coward strolling in to play a supporting role in Ian’s life. The book has a few shortcomings on the literary side, but this generally means that only a few of the Bond books are spoiled in Lycett’s discussions. Overall, it’s quite an interesting read.