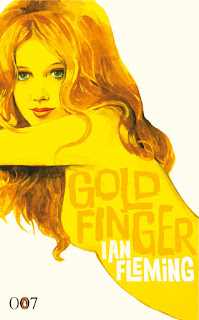 Goldfinger said, ‘Mr Bond, they have a saying in Chicago: “Once is happenstance, twice is coincidence, the third time it’s enemy action.”’

Goldfinger opens with an unexpected reference to Casino Royale, the first James Bond adventure. It starts with Bond running into a man he met during the events at Royale-les-Eaux: Junius Du Pont was one of the men at the card table on the night when Bond memorably cleaned out Le Chiffre’s funds. Now, seeing Bond at the airport by coincidence, Du Pont leaps at the chance to make conversation. And before long, he makes Bond a job offer.

It turns out that Du Pont has been losing heavily at cards with a man named Auric Goldfinger. This man Goldfinger is incredibly rich; he’s simply rolling in money. He’s one of the richest men in the world. Yet he consistently beats Du Pont in canasta, and Du Pont is a pretty good card player. He’s convinced that Goldfinger must be cheating somehow, but he can’t figure out how. And so he hires Bond to investigate. And thus, with the simple affair of a man cheating at cards, James Bond is launched into his wildest adventure in Ian Fleming’s Goldfinger. 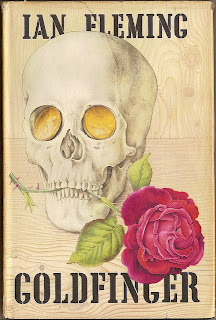 Of all the Bond novels, I think Goldfinger is my favourite one. I think the reason is obvious: Goldfinger is one of the best Bond villains. He was memorably played onscreen by Gert Frobe, but the Goldfinger of Ian Fleming’s novel is just as magnetic a personality. The entire book is constructed as a duel between Goldfinger and Bond, divided into three parts based on Goldinger’s dictum (which prefaces the book). And thus Bond discovers how Goldfinger is cheating Du Pont, and he turns the tables on him. In the second part, Bond and Goldfinger face each other in a game of golf. And in the third part… well, spoiling anything about this part would just be criminal.

But Goldfinger just has this aura of pure evil surrounding him. The schemes he constructs are meticulous and quietly brilliant in their own way. Even something as inconsequential as beating Du Pont in a few card games is ingeniously planned and executed. And then there’s Oddjob, Goldfinger’s Korean servant. He is practically unstoppable: a martial arts master with incredible strength and undying loyalty to Goldfinger. He’s also got his signature weapon: the lethal hat which he throws as a projectile. Oddjob is also largely silent: his cleft palate makes his speech unintelligible for all but Goldfinger. This silent killing machine is one of the deadliest opponents Bond ever faces. 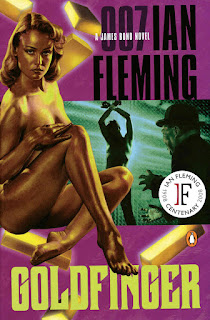 But Bond is also introspective in this novel. In this respect, Fleming rather brings Bond back to the man he was near the start of the series: a man who doesn’t enjoy his job but who realizes that someone has to do it. Bond doesn’t like killing others, and he is plagued by self-doubt. His plans don’t go off smoothly and he has to improvise on more than one occasion. He can’t save everyone, and this is brought home to him most painfully. Some of the things he does in this novel make him look like an idiot. He’s a flawed human being, and this is the aspect of Bond that continues to fascinate me.

(Here’s a fun fact about Goldfinger: the title and name of the main villain is a reference to Erno Goldfinger, an architect who was related to Fleming’s golf partner, John Blackwell. Blackwell was not fond of Goldfinger, and this may have inspired Bond’s use of the name as a villain. When Goldfinger found out he threatened to sue, and in response, Fleming proposed to alter “Goldfinger” to “Goldprick” and explain the reason for it to readers in a preface. The matter was settled out of court, and obviously, Fleming was allowed to go ahead with “Goldfinger” after all.) 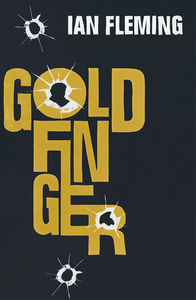 Overall, Goldfinger is a brilliantly entertaining novel. This is the best Bond villain, the wildest and most imaginative story, and the deadliest duel. The book never offers a dull moment and is plenty of fun to read. Even Anthony Boucher, who positively despised the work of Ian Fleming, conceded that “the whole preposterous fantasy strikes me as highly entertaining”. It’s true, the story is preposterous, and there’s one obvious objection to Goldfinger’s plot. (So obvious, in fact, that in the film adaptation the plot is altered and Sean Connery brings up the objection to the book’s plot. Although the objection is raised in the novel, Goldfinger dismisses it with a general “I-have-foreseen-everything” answer.) But Fleming manages to make the preposterous story seem like it could happen, and it makes for a wildly entertaining romp. If you’ve only seen the film, then brother, are you missing out. The film really launched Bondmania, but it had some of the best source material in the entire Bond canon – and it’s personally my very favourite. 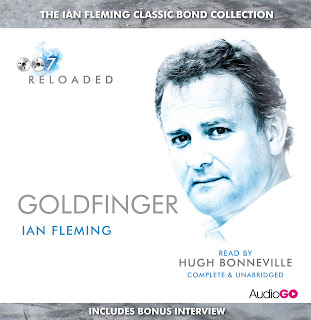 Notes on the audiobook: Goldfinger was read by Hugh Bonneville. He’s actually got a small part in the Bond film Tomorrow Never Dies and brings it up in the post-audiobook interview. It’s basically a cameo, but it’s a really nice touch to have actors from the Bond series come back and do the books. Bonneville does a terrific job with the voice of Goldfinger. Gert Frobe’s portrayal is so iconic that it’d be tempting to simply do an impression of his portrayal, but Bonneville does not do this. I loved this touch because, after all, Goldfinger in the novel is a naturalized Englishman who came from Latvia or someplace like that as a young man. As a result, it makes sense that his English would have only a trace of a foreign accent, and Bonneville does a really neat job of getting this across. He also gets across the excitement of the duel of the two titans, Bond and Goldfinger. His take on Pussy Galore is pretty interesting and entirely different from the film. I really liked his voice for Bond, and I find it fascinating to hear all these different actors take on the roles of Bond and his American friend Felix Leiter.

I try to avoid book/film comparisons in these reviews—I’ll do those when I get to the film— but the film is so famous that bringing it up seems inevitable.