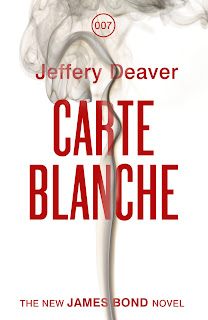 Jeffery Deaver is an internationally acclaimed thriller author with whose work I am unfamiliar. But I know this much about him: he’s one of the many authors to try his hand at a James Bond pastiche. I’ve never read any of them, having confined my Bond reading to the original Ian Fleming novels. But I was open to the idea. After all, I read plenty of Sherlock Holmes pastiches back in the day and enjoyed them fine, what’s so different in concept about a James Bond pastiche? And so I approached Deaver’s Carte Blanche with some real hope. I was expecting a solid read.

Basically, Carte Blanche is Bond in modern day. Some signals are intercepted and the secret service finds out that Some Villains are behind a Nefarious Plot. Bond’s mission is to stop it, of course, but that doesn’t mean he can’t romance the beautiful ladies he comes across, and it sure doesn’t stop our villains from being over-the-top and dramatic. Our villain is Severan Hydt, a Dutch-born megalomaniac whose everyday cover is that of an environmentalist, running a waste disposal corporation. He also gets his jollies while viewing dead corpses. His sidekick is Niall Dunne, an Irishman from Belfast who thinks of everything and is the deadliest villain Bond has faced since the last Irishman in From Russia with Love. 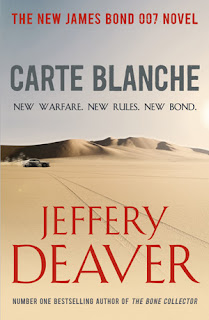 So, you can pretty much take it from there. Bond goes to a few cities, following Hydt and Dunne, infiltrating their circle and finally discovering what the whole plot is about. It even has a cute nickname, Incident 20. Then he foils their plans. The villains meet appropriate ends. And there’s a few Bond girls, including humanitarian Felicity Willing and South African policewoman Bheka Jordaan.

However, there are a few twists to this Bond. He’s been updated for the 21st century. What does that mean? Well, he’s a veteran of the Afghanistan war instead of World War II. But his background (which we originally learned in an obituary in You Only Live Twice) is also radically changed. I dunno. I don’t particularly like the changes. To me, Bond is a timeless character like Nero Wolfe or Sherlock Holmes, the kind of character who never dies. I would have been fine if Deaver had cut out everything about the new Bond’s background because all it really does is slow down the book. It also gives you an unnecessary twist.

Deaver really likes twists. I mean, he really, really likes throwing them at you. To the point where he’s making twists out of plot points that don’t need to be twists. And it gets annoying. What’s this? It’s a sinister new character who’s obviously James Bond in disguise!!! No matter, let’s follow him for 30 pages and then reveal to the surprise of absolutely nobody that—my God!—it’s James Bond! What’s this? James Bond is cornered, has no weapons, and cannot communicate with the secret service? Don’t worry about it—we just cut away from the scene where Bond pulled everything he needed out of his ass. And you thought he might have been in danger, silly reader. OH MY GOD, WHAT’S THIS??? Another unnecessary twist to convolute the plot further, turn Bond into Sherlock Holmes, and reveal an Obvious Villain as a villain? I never saw it coming! It’s a good thing this mission is over… oh my God, Darth Vader is Batman’s father and James Bond is married to Mary Poppins! Phew, let’s call it a day. 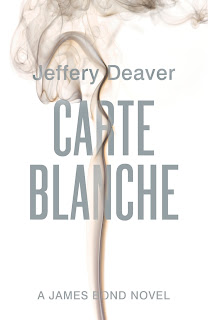 Ian Fleming’s plots didn’t work that way. Sure, he could hide information from you and keep you guessing (From Russia With Love), but (a) this information was often also hidden from Bond and (b) he didn’t keep bombarding you with twists left and right, trying to throw you off balance. What’s particularly irritating is how Deaver hides information from the reader in order to throw these twists at you. Fleming would always tell you what Bond knew, and sometimes even more than that. You’d see everything from Bond’s perspective, so when he had to go undercover you knew the details of his cover, any disguise he chose to use, etc. The only exception I can think of is The Man With the Golden Gun, but there it is justifiable and it is still used sparingly. Here, Deaver hides that information from you and reveals it in a Yet Another Big Plot Twist again and again, which frankly feels like he’s just written himself into a corner and taking the easy way out. I like plots with plenty of twists, but Deaver is using misinformation of the reader as a plot crutch. As a result, the plot hobbles along instead of running like it should - Deaver constantly has to go back and re-inform the reader, this time accurately, and this removes the plot's enjoyability.

The villains are… okay. I didn’t find Hydt that unusual a character – look on the Internet for five minutes and you’ll find people with even stranger sexual obsessions. Niall Dunne is far more interesting a villain, even though he’s basically Deaver’s version of Red Grant of From Russia With Love. And there is one other character who is quite obviously a villain, but you don’t get the revelation till one of the final chapters. This character would have been better if their villainy was less obvious. 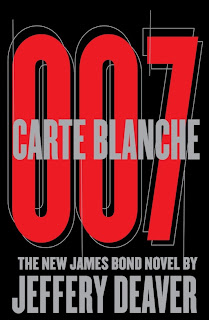 As a thriller, Carte Blanche is okay, I guess. The twists get really irritating after a while, and that’s a shame because it kind of ruins a plot that had okay villains and one or two genuinely interesting ideas. But this isn’t James Bond, this is some guy with the same name. He just happened to read the Bond books, tweaked Bond’s signature drink from Casino Royale, and gave it a lame name (no, really, his explanation of the name is simply awful) in order to justify the title. While I don’t think I wasted my time reading this book, if other Bond pastiches are of the same calibre, I think that 13-or-14-year-old-me was not unwise to avoid them.

If you’re a die-hard Bond fan, you might enjoy it but I can’t guarantee that. I have no idea how fans of Deaver would react to the book. While my reaction isn’t hostile, it’s a feeling of indifference. The book is a curiosity that made for a decent read, but it could and should have been better.

Note: I listened to an audiobook brilliantly read by Toby Stephens, who also did such a terrific job on From Russia With Love. Unfortunately, the reader could not disguise the plot's weaknesses, but the recording is well-worth listening to.