Written by Patrick
Warning: This book deals with events that began in the 1959 novel Psycho. So if you are unfamiliar with the story, either the novel or the film, please turn away because I will be dealing in spoiler territory. 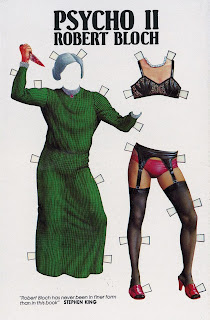 Much to my misfortune, I have sat through all the Psycho movies. This includes not only the ghastly Gus Van Sant-directed remake, but also the three sequels to the original 1960 film. As you can guess, I’m not a fan of most of these (though I surprisingly enjoyed Psycho IV). They were derivative pieces of schlock that tried to cash in on what the original Psycho was. However, Robert Bloch also wrote two sequels to Psycho. Until now, I’ve never subjected myself to any of them. But I finally decided to take the plunge and try my hand with Psycho II.

In my defense, I was seduced by the plot idea. Psycho II deals with Norman Bates years after the events of Psycho left him psychologically traumatized. He has been institutionalized since, and has slowly but steadily been recovering. Only one day, he snaps and escapes the institution disguised as a nun. His psychologist, Dr. Clairborne, is worried that Norman will go on another killing spree. But his fears are unfounded: Norman’s charred remains are soon discovered in the car he used to escape. It seems that Norman Bates is truly dead… but if that’s the case, who was it who murdered Sam Loomis and his wife Lila, the two people responsible for Norman’s incarceration in the first place?


Meanwhile in Hollywood, producer Marty Driscoll is busily preparing to make a movie based on the events of the first novel. And Dr. Clairborne is convinced that if Norman is going to kill anybody, it will be on the set of this movie, Crazy Lady. So he flies over to Hollywood to warn the cast and crew of the danger. Instead, he finds himself roped in as a technical advisor… and soon enough, strange things begin to happen… 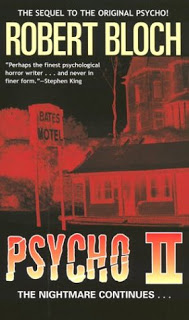 Perhaps the plot summary sounds familiar. I’m not a huge fan of horror, but it seems to me that this plot idea has cropped up from time to time in horror movie sequels: a producer plans to make a movie based on the original killings at Camp Doom-and-Gloom, where the councillors were butchered by Tim, the machete-wielding madman whose face is covered by a lacrosse helmet. Only someone begins to target the actors in ways that mimic the original murder spree. The fathead producer refuses to pull the plug on the movie because the carnage makes for great publicity. The body count rises, Tim kills everyone but the token final girl, and all ends well until next year’s movie.

In many ways, Psycho II reflects that kind of a sequel, but it’s making fun of them throughout with some vicious satire. The body count of this novel is remarkably small, and even though odd things happen throughout, the murder carnages occur at the beginning and end of the novel, which I find a bit unusual. Throughout, Robert Bloch keeps asking why society has changed so much and why violent spatter films are so popular. Are these movies simply reflecting the times, or are movies like this creating a more violent society? These conversations throughout the novel are positively fascinating, for instance in this exchange between Dr. Clairborne and spatter-film director Vizzini:

"Kindness is a luxury afforded only in times of prosperity. The world isn’t prosperous anymore, and we will see worse. There will be more people like Norman Bates, the son of a bitch. His mother was a bitch and he is a child of our times." The director gripped the knife handle tightly. "This I believe and this is what my film must say."
Again, Claiborne looked away. He didn't want to see Vizzini's face, but he had to speak.
"Some of us still hold the belief that there's good in the world."
"Perhaps so. But to believe in good, you must also acknowledge evil. (…) There is a part of the Devil in every man. And I will show him to you."


Ironically, it seems that Robert Bloch didn’t quite get the memo. Because everything that does not work about Psycho II is somehow related to this idea of violence, both fictional and real-life, becoming more explicit and more vicious. 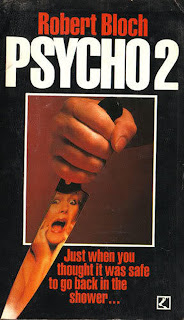 But many years separate these two Psycho novels. Psycho II was released in 1982, and society had changed a lot. Psychological horror like Les Diaboliques just didn’t cut it anymore: there had to be blood, and the more the better. Psycho came out in 1960 and really changed popular culture worldwide. Since then, many horror films had been released, such as Black Christmas (1974) and The Texas Chainsaw Massacre (1974). 1978 saw the release of John Carpenter’s Halloween and the vicious rape-revenge film I Spit on Your Grave. Halloween had a particularly tremendous impact and inspired a host of imitators such as the popular Friday the 13th series, the first film of which came out in 1980. 1982 was also the year John Carpenter’s The Thing was released.

Now, I do not mean to say that all these films are equally good or bad. But I am saying that you can see the level of violence and gore change dramatically. Psycho was a shocker to audiences in 1960, but since then, movies and books got more violent and more explicit. The bad horror movie would throw buckets of blood at you and assume its job was done. And although it condemns that idea, to some extent Psycho II follows just that formula.

This is particularly obvious near the novel’s end, an over-the-top anticlimax which is really uncomfortable to read. You see, we get an in-depth look at splatter-film director Vizzini’s mind. And it is, for lack of a better word, severely f*cked up. You see, when Vizzini was a little boy, he saw his mother viciously butchered and raped. And when little Vizzini crawled out of his hiding spot, he saw his mother’s vagina and fainted… because he got an erection… and since then, he’s never been able to get one and therefore have a fulfilling sexual experience… and because of that, he plans to rape someone. And instead of hinting at this subtext, Robert Bloch just flat-out states it. 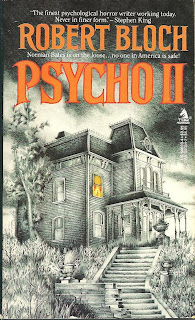 To me this is the equivalent of movie series like Saw or Friday the 13th, which just throw gore at the audience and expect that that will be enough to shock people into being scared. The original Psycho dealt with some controversial matter, from transvestism to insanity, but it was restrained and that amplified the horror. Here, Robert Bloch just throws some shocking crap at you, and the more sexually twisted the better. For instance, at the very start of the novel Norman escapes the institution dressed as a nun. Fair enough: that’s a delightful idea. Do you know what isn’t delightful about it? Norman raping an elderly nun after regaining his freedom.

I don’t want to sound puritanical, but I don’t like reading about this kind of stuff. It’s nasty and just plain uncomfortable to read. All the restraint and subtlety of Psycho is gone from these segments, and as a result these bits of Psycho II make for very difficult reading. But there are enough clever ideas in the novel to warrant a reading from fans of the original. Although I saw where the novel was headed long before it got there, I generally enjoyed the ride and liked the debates Bloch held about the nature and purpose of graphic violence in today’s movies. And the satire of Hollywood and its money-driven mentality is surprisingly still relevant today. Overall, it’s not a bad novel, and it’s certainly far superior to the crappy Psycho II movie, a project that is entirely unrelated to this book.