The Curse of Dracula

Written by Patrick
When spooks have a midnight jamboree,
They break it up with fiendish glee.
Now, ghosts are bad, but the one that's cursed
Is the Headless Horseman, he's the worst 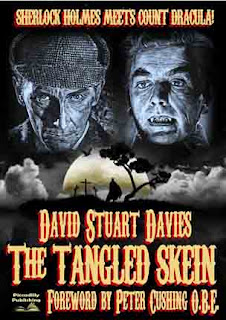 In my last Holmesian review, I chastised Loren D. Estleman for using the plot device of killing Holmes off for a few pages before bringing him right back, an overused plot device in the realm of Holmesian pastiches. I advocated for more creativity from pastiche writers. And I definitely got that from David Stuart Davies in The Tangled Skein. The problem is, I’m still not sure whether I enjoyed the book or not. One minute I’ll love it, and the next minute it will have me more irritated than an English prof who thinks Edgar Allan Poe was a time-travelling postmodernist. (I’m not even making that up, but that’s a story for another day.)

The Tangled Skein is a really clever sequel to The Hound of the Baskervilles. You will recall that Sherlock Holmes’ body was never recovered after the incident at the Reichenbach Falls. Well, the body of the guilty party in The Hound of the Baskervilles was also never recovered. And Sherlock Holmes discovers that this party is alive and very much well… and seeking revenge on Holmes for having foiled his plans.

And thus, the game is afoot! Before long, the case ties into a series of mysterious attacks on Hampstead Heath—a “lady in white” has been luring children away and then wounding them, leaving behind two puncture marks in the throat. This leads to a meeting between Holmes and Abraham Van Helsing, as the famous vampire-slayer reveals to Holmes that Count Dracula has escaped to England!

Interestingly, David Stuart Davies does not follow the plot of the original novel Dracula for this book. Instead, he seems inspired by those Hammer Horror films that starred Christopher Lee as Dracula (and occasionally, Peter Cushing as Van Helsing). This is the really clever bit, as it allows Davies to come up with his own plot, one that contains a few genuine surprises and which, for the first half at least, feels like a genuine detective story despite the presence of the supernatural.

I also really liked the meeting between Holmes and Van Helsing. At first glance, you wouldn’t think that the consulting detective of 221B Baker Street would have much in common with the Dutch vampire hunter. But in Stoker’s novel, Van Helsing is something of a detective figure, first having to piece together what was happening to Lucy Westenra, and then tracking down Dracula’s coffins and trying to find all his hiding places. This detective-like quality is most evident in a scene in which Van Helsing explains how you can break into a posh home in the middle of the day without arousing any suspicions: in fact, he manages to do it right in front of a police officer! So when Holmes and Van Helsing meet, it is truly the meeting of two great minds (who both happened to be played by Peter Cushing!). 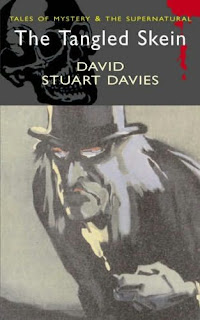 Those are the really clever bits, the bits that I really liked. Unfortunately, there are other bits, ones that I did not like at all, and as a result I still don’t quite know what to think of The Tangled Skein. Although it’s quite a clever sequel to The Hound of the Baskervilles, its premise is a major contradiction of the previous novel. In that novel, as Holmes points out, if he had considered for an instant the possibility of the supernatural, he would never have solved the case. But now he’s decapitating vampires with no problem at all??? And I wish I could ignore this contradiction, but David Stuart Davies won’t let you: one of the final images of this novel is… wait for it… the Hound of the Baskervilles!!! No, I’m not talking about the hound that Holmes battled, I’m talking about the honest-to-goodness beast of legend. You know, the one that doesn’t exist??? The one that, if it did exist, would have made the novel before an impossibility??? It doesn’t even play a role in the story, it just shows up as a slap in the face to anyone who isn’t altogether fond of the idea of Holmes fighting off the supernatural.

Look, I’m all for creativity, but you can’t do that! It has been clearly established in the canon that the legendary Hound was fictitious, and you’re going against that??? Why bother writing a sequel??? At least when Nicholas Meyer “revised” the canon in The Seven-Per-Cent Solution, he gave genuinely clever ideas for the revision. Here it’s a tacked on, unnecessary scene that does nothing but irritate people like me.

There are other problems with the story, and it’s in a similar vein: there are a lot of unnecessary scenes in this novel. Scenes that don’t need to exist, slow the pace of the novel down, and aren’t even all that fun to begin with. Take, for instance, an attack on Holmes and Watson by a malevolent owl late in the novel. What does it accomplish? Nothing. It delays Holmes and Watson slightly, but they were already delayed and so not having this scene would have accomplished the same result in terms of the plot. Or how about a scene early in the novel? Holmes just got a mysterious package, and Watson decides to take the initiative and investigate its origins. Holmes knows Watson’s errand is a waste of time, but does he stop him? Nope. He lets Watson waste his time and the readers’ time, and then laughs in his face when he gets back. The scene just makes Holmes look like a mean-spirited jackass. There’s another scene where Holmes is killed off for practically a page, but we know he isn’t dead yet. But Watson still wastes our time mourning the supposed death of Holmes before discovering that he’s a nitwit and that Holmes is still alive. The only thing that scene accomplishes is yet another killing-off-Holmes cliché, as well as making Watson look like an idiot, even by Nigel Bruce standards.

So maybe you can see my dilemma. The Tangled Skein has some terrific ideas as a sequel to The Hound of the Baskervilles and as a Holmesian pastiche in general. It’s a very cinematic book, clearly inspired by those Hammer Horror films, and it would have made a great installment in that series. It’s creative in its incorporation of Dracula, and doesn’t confine itself to territory that has been covered before. But many scenes are so blatantly unnecessary that it’s infuriating. For all the good stuff there is to like about this book, there’s some bad stuff in there too to drag it all down. 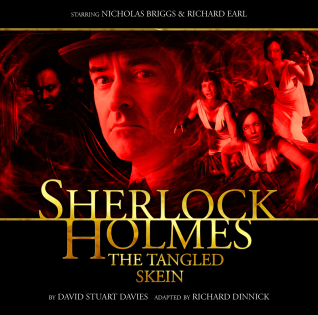 Fortunately, the folks at Big Finish stepped in with a radio adaptation of The Tangled Skein. And it is fan-freaking-tastic. It’s remarkable how much the book is improved when its most useless scenes are removed. All the good ideas are still here, and it’s remarkably faithful to the source material. And yet, it has eliminated most of the book’s major flaws. And it’s a lot scarier than the original novel. The atmosphere is great. The production values are outstanding—this is an elegantly produced radio play, with a full cast, score, and a wide range of sound effects. The story is narrated by Watson and the dialogue is excellent, without those terribly awkward moments where characters tell each other what they are doing. And somehow, the radio production brings out all the book’s cinematic potential despite being a completely different medium. It is quite simply brilliant, and a terrific initiation for me into the world of Big Finish’s audio productions.

Going by the radio play, I’d have to say that The Tangled Skein is worth your while… and I suppose that, on average, I spend more time liking the novel than being pissed off at it. The audio adaptation is far better than the novel, but there are some really good things about the novel as well, and I enjoyed it. There are certainly far worse Holmesian pastiches out there, and at least this book manages to be creative and original… and it even has an occasional surprise in store for you!

Note: Ironically, considering how good the radio play adaptation is, the audiobook for this novel is the most incompetent one I’ve ever heard, and I’m not exaggerating. We’re talking Harry Stephen Keeler levels of [in]competence. On a technical level, it's atrocious. You can oftentimes clearly hear jazz/swing music in the background. (Is it from the other side of a cassette tape??? It sounds like it. If so, why is there jazz on the other side???) It's incompetently slapped together— you can tell exactly where the sound engineers made a cut and threw in a new audio clip. At completely random moments, a character's dialogue will be enhanced with an echo, and I never saw any rhyme or reason to this choice. Is it only done in an echoic room? Nope, because it only happens to one character – nevermind, it’s happening to both of them now — oh, nope, it’s back to just happening to one character… where was I? Oh yes, the echo can even happen in the middle of a conversation that has been entirely normal until now! It's basically a moment where the sound crew gets to go "Surprise!" before resuming business as usual. 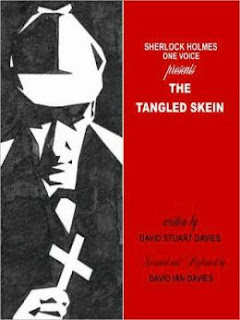 And the narrator? My goodness, he does not get one single inflection right. Not one word made me believe any of this was going on. His voices for the various characters are barely differentiable, and he has the same laugh for *everyone*! Whether surprised, pleased, or diabolical, it's the same cackle and it gets irritating. Not only that, he ploughs through his words so quickly that you barely get the time to process the information.

In short, it was a fascinatingly terrible audiobook. I listened spellbound for a few minutes before turning it off and reading the book for myself. If you want to read this book, please conserve your sanity and stay away from the audiobook. It’s a sure road to madness, and it even makes Kris Dyer’s performance of The Beast Must Die look Oscar-worthy.