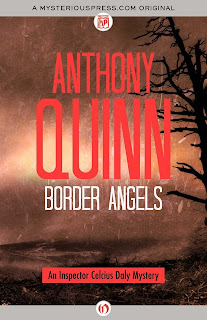 Inspector Celcius Daly was introduced to readers a year ago in Anthony Quinn’s debut novel Disappeared. I enjoyed the book tremendously, and in particular liked the character of Celcius Daly: a hard-working, honest Catholic cop in a Protestant land, trying his hardest to ensure that justice prevails in a world that seems dead-set against him. And so I have been eagerly looking forward to Celcius Daly’s return in Anthony Quinn’s Border Angels, in which Daly’s doggedness and honesty get him into serious trouble...

You see, it all revolves around Lena Novak, a Croatian woman who was forced into a prostitution ring by the ruthless Jozef Mikolajek. While on the job, she met a man named Jack Fowler who took pity on her. He decided to become her knight in shining armour and to rescue her from Mikolajek’s brothel. But a few weeks later, the fairy tale has taken a dark turn. Jack, responsible for some dirty tricks with money that doesn’t belong to him, is found floating in his swimming pool, quite dead. Suicide is possible, but Daly isn’t quite convinced. And Lena’s photograph is found by the body, but the girl herself is nowhere to be found…

That’s all I dare reveal about the plot. Although I highly enjoyed Disappeared, I had some gripes about the plot construction. I’m happy to report that Border Angels is written with a more confident and experienced hand, and it has learned from the missteps its predecessor made. Border Angels is more personal, more vivid, and this time around, the plot construction has improved and the ending is genuinely surprising.

The quality of the writing is simply superb; Quinn can plant a vivid image in your mind, be it the middle of a chase scene or a quiet moment of description:

Their branches loomed out of the fog, smooth and sleek, like a gleaming jumble of female bodies, limbs floundering as if turning over in sleep.

His features moved in spasms, fragments without any connection to whatever thoughts and emotions worked their way through his brain.

And this won’t surprise anyone, but I really like the character of Celcius Daly. We get some more details about his personal life in this novel, and how his ten-year marriage failed despite his best efforts. Daly is a decent, hard-working, honest man, a man who wants to go out there and do some actual police work instead of hiding behind a mountain of bureaucracy-pleasing paperwork. He’s a man who wants to do the right thing, and that’s something which often requires major sacrifice.

Also in Border Angels, the setting plays a major role. Much of the book is set on the Irish border, which Quinn brings vividly to life. It’s a dark, unsettling, hostile world, one which tries to destroy Lena Novak and, to some extent, Celcius Daly. It’s an atmosphere that oozes with tension, as though violence could break out at any moment. And throughout the book, “border country” is used as a metaphor for the main characters’ plights: Lena Novak is literally wandering through dangerous border country, being pursued by both Celcius Daly and violent criminals. Meanwhile, Celcius’ personal life is trapped in just as dangerous a border country, but an emotional one, and his search for Lena helps him to escape its perils.

Overall, I can highly recommend Border Angels. Anthony Quinn has taken the experience of writing Disappeared and put it to good use, improving on his first novel’s weaknesses while keeping the stuff that made it such a memorable and promising debut. Although reading Disappeared first would probably make this book more enjoyable, it’s not necessary to do so. Border Angels is an engaging, compelling read. The author juggles all the important elements (including characters, setting, and plot) without overdosing on any particular element. The resulting novel is a pleasant read with a terrific central character, intriguing storyline, and wonderful atmosphere.

This novel is set to be published by MysteriousPress.com on October 22nd. I received a free copy via Netgalley in exchange for an honest review.