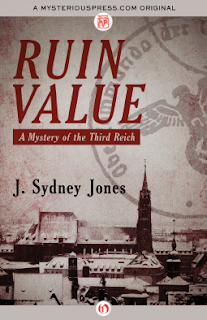 Living in 2013, when we think about World War II we can often forget about the smaller things. Of course the widespread Nazi atrocities are well-known, but it seems that many people assume that once Germany surrendered, the European war was over in one night. It’s not true, as J. Sydney Jones reminds us in his new book Ruin Value. Many Germans resented the Allied conquerors, and there were even some bands of Nazi holdouts. Jones sets his story in Nuremburg, shortly before the infamous Nuremburg trials began. The city itself lies in ruins, and it is about to become the stage for arguably the most important trial in the history of mankind.

That is, unless a mysterious serial killer gets his way… Because someone has been targeting Allied troops, slitting their throats and leaving cryptic coded messages behind. And if this killer gets his way, the murders will upstage the events at Nuremburg. Luckily the Allies have an ace in the hole: Captain Nathan Morgan, an ex-cop who went into intelligence during the war. Now he has to return to police work, and he’s paired with an unlikely partner: a German cop accused of collaborating with Nazi war criminals.

This partnership is one of the most interesting elements in the book. We are told that Chief Inspector Werner Beck is innocent of war crimes, and was accused by a man who envied his position (and now, conveniently enough, occupies it). But he is regarded with distaste by the Allies and with distrust by fellow Germans. He’s an outsider forced to collaborate with Morgan, a Jew himself, and the two men respect each other’s abilities even if they get on each other’s nerves at times. It is terrific stuff.

I also really liked some of the touches in Jones’ writing. The opening of the book, for instance, as it talks about human blood and then slowly “zooms out” to discover that the blood in question belongs to the book’s first victim. As far as prose goes, Ruin Value has plenty of wonderful touches all over the place that make it compelling reading.

Another strength is how few concessions it makes to modern sensibilities. It seems that any author writing historical fiction today is frightened of offending any reader, so the main characters are all perfectly politically correct and if possible will lecture someone else on how important human equality is or some nonsense like that. Ruin Value doesn’t really do that – for instance, Nate Morgan is given the job because nobody will dare to criticize a Jew for incompetence after the atrocities of the Holocaust. And there are other small historical traps which Ruin Value neatly side-steps: for instance, it never uses the terms “serial killer”, which would have been an anachronism.

The only real problems with Ruin Value lie in plotting and storytelling, which can be weak at times. For instance, after one of the victims gets killed in an unusual way, the officers investigating the murders deduce that the killer must be able to afford the luxury of privacy, which is scarce in Nurembug. But a few scenes later, they are right back to hunting the streets for a crazed war-widow prostitute, forgetting all their clever deductions. There are other scenes which I wish were eliminated or rearranged – it seems that every time you find out something new about the killer, a few pages later the cops find out the exact same thing. Essentially, this means you get some pieces of information twice in quick succession, and it can slow down the book’s pace.

The identity of the killer is far from surprising. In fact, there are only two or three people who could even possibly be the killer, and it’s pretty obvious which of them is guilty. It gets even more obvious when one of these people is killed. And then, to make matters worse, the police officers get a tremendous piece of luck to solve the crime. Throughout the book they go through painstaking police procedure and it gets them nowhere, only to have a character from the beginning of the book walk onstage and say “Oh, if only you’d told me about all this before! I could’ve told you that I used to see So-and-So and he definitely had major mental issues just like the ones our killer has, so he’s probably your killer!” Jones has used an enormous coincidence to wrap things up before one of the romantic leads is killed, and he seems to realize just how enormous it is. So instead of the coincidence leading straight to the killer, it takes the officers a lot of wild goose chasing to figure out that So-and-So is now known as This-and-That. If you’re going to use an outlandish coincidence, the least you could do is stick with it. Instead, the author tries having it both ways, with the Lucky Coincidence and All This Hard Work Is Getting Us Nowhere approaches being employed simultaneously in the climax. For me, it ended the proceedings on rather a sour note.

But there’s enough good stuff in Ruin Value to make it worth the read. The unlikely duo of Morgan and Beck get the job done despite some friction in their teamwork. The writing is terrific and brings post-war Nuremberg vividly to life. The main characters are interesting and likeable, and the author does a very good job of working with the post-war setting instead of disguising modern characters and attitudes in 1945 attire. It’s a good novel overall, and knowing about its plotting deficiencies in advance will probably allow you to enjoy it more.

This is a forthcoming novel from the Mysterious Press. I received a free copy of the book via NetGalley in exchange for an honest review. The publication date is October 1st 2013.