A Comedy of Murders 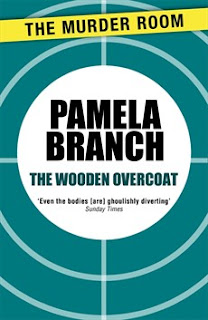 When Clifford Flush founded the Asterisk Club, he did it out of purely altruistic reasons. It was a service that society desperately needed, and Flush was willing to provide it. You see, the Asterisk Club is the most exclusive club in London, and possibly the world: in order to join, you need to be a wrongly-acquitted murderer. The current Club members include such colourful people as Mrs. Naomi Barratt (a self-made widow) and The Creaker, an enormous man who frightens even the other Club members. Rounding out the cast of murderers is the butler, Beecher – not a murderer himself, but he has been jailed 14 times for housebreaking.

Next door to the Asterisk Club live Peter and Fan Hilford and Bertha and Hugo Berko. They share the lease on the house and
have a bit of a rat problem. The Asterisk Club is full up for rooms right now, and so the Club sends its newest potential recruit, Benji Cann, next door as a paying lodger. What could possibly go wrong? Well, let’s just say that Mr. Cann will not become a member of the Club after all, now that he’s deceased.


This is just the first step in a mad comedy of errors, as the corpses pile up and a team effort is launched by the Hilfords and Berkos to dispose of the corpses. When the Asterisk Club gets hold of the news, they decide it’s time to take matters into their own hands and show the amateurs how the professionals handle things. As you can perhaps guess, hilarity ensues. 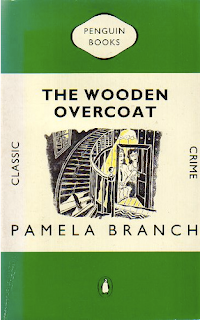 If this idea intrigues or delights you, then you will probably enjoy the book in question: The Wooden Overcoat by Pamela Branch. This book is, simply put, laugh-out-loud funny. The plot jumbles all over the place, and if I tried to explain it to you right now we’d be here all day. A lot of stuff happens. There are mix-ups. There are frame-ups. The tide refuses to co-operate with the conspirators’ plans. The coppers show up at the worst possible moments. And by the end of the novel, there’s a tidy little pile of corpses, with the murderer’s identity being crystal clear.

Although The Wooden Overcoat is not the most fairly-clued mystery I’ve ever read, the few clues that are dropped point squarely to the guilty party, so that the extremely observant reader might be able to logically deduce whodunit. I was not able to do so and am still beating myself up over it, but to be honest there just aren’t all that many clues. But because there are some, it avoids the feeling of anti-climax and frustration that a “cheating” author provokes.

Pamela Branch (1920-1967) was apparently well-loved in her hey-day. The Times Literary Supplement compared her novel Murder Every Monday to the work of Evelyn Waugh. Christianna Brand, herself a fantastic writer of detective stories, said that Branch was “the funniest lady you ever knew”. The Rue Morgue Press has a terrific article on Branch and I really could do no better. Sadly, she left this world far too soon, at the young age of forty-seven, a victim of cancer. If The Wooden Overcoat is a representative sample of her work, then it’s a particular shame – Branch was a wonderfully funny writer and a good plotter, and it’s a terrible shame that she wrote only a handful of books. I can recommend The Wooden Overcoat unreservedly.

Note: I read The Murder Room's e-edition of The Wooden Overcoat and can recommend it. The editing and proofreading are both very good. There is a brief biographical note on the author after the novel, but it is very brief and doesn't provide the depth of the Rue Morgue Press piece I've linked to. If you're looking for an e-edition, this is a very good option. The Rue Morgue Press has also reprinted this one as an actual, for-realsies book-book.