Too Tough To Die 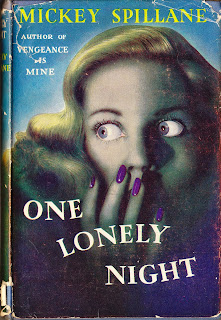 It’s late at night, the rain is pouring down hard, and Mike Hammer is walking on a bridge. He’s feeling depressed, humiliated, and completely alone. Just that day, Hammer was berated in court by a judge, whose speech began calmly and turned into a vicious, hateful speech. The judge accused Hammer of being a violent, unrepentant psychopath who had gotten a taste of death during the war and who couldn’t get enough of it now. He condemned Hammer as evil incarnate, the worst kind of criminal scum, and he prophesied that a rain of purity would wash him into the sewer with the rest of the scum. Hammer left the court humiliated, his soul laid bare and dissected for all to see, feeling cut off from society and bitter about it.

That’s when he sees the girl. She’s running from something, terrified. She falls into Mike’s arms and begs for his help. That’s when a fat man comes out from the shadows, a gun in his pocket pointed at Hammer. The fat man grins and prepares to shoot them both down, but Hammer’s gun is quick: he shoots the fat man in the face with a .45. But the girl is terrified. She thinks Hammer is “one of them”, and in desperation, she throws herself off the bridge. Hammer is left stunned, with only the corpse of the fat man for company. And that’s how Mickey Spillane’s novel One Lonely Night kicks off.


If you’ve followed this blog for a while, you’ll know that this isn’t my first time reading a Mike Hammer novel. Over two years ago, I made the tough-guy-PI’s acquaintance in I, The Jury. It was Mickey Spillane’s first novel and left me absolutely disgusted. The “hero” was anything but: he was psychotic, he was sadistic, he was vicious. He loved inflicting violence and described it using fetishistic imagery. Sure, he was lean, mean, and tough, but by gum was it ever uncomfortable to read! I slammed the book as unreadable and I left it at that. A year later, I read Lady, Go Die!, a direct sequel to I, The Jury, left unfinished by Spillane and completed by Max Allan Collins. To my surprise, I really enjoyed the book, but I still couldn’t warm up to the character of Mike Hammer. 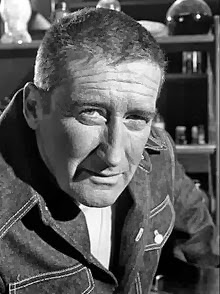 So why the return to Mike Hammer? Call it morbid curiosity. The more I read about Spillane and Mike Hammer, the more interested I was. For instance,  I found a few interesting interviews with Spillane online, and I actually agreed with some of the stuff he said – unreservedly in some cases. For instance, in one interview he says that nobody reads a book to get to the middle – they want to get to the end, and an author should save his biggest fireworks for the ending. I found myself nodding in agreement. I finally decided to give Hammer another shot, and settled on One Lonely Night.

Why am I going through all this personal history? Well, I just want to make it clear what I thought of Mike Hammer coming into this book. Because believe it or not, I absolutely loved One Lonely Night. In fact, the opening section of the book left me positively floored. I couldn’t understand it before when people referred to Spillane a “poet”, but when I read that first chapter, I finally got it.

The first chapter is dark; and I don’t mean the synthetic darkness that comes a dime a dozen in today’s “gritty” reboots/remakes. This plunges you right to the depths of despair, and I get the feeling that this novel was Mickey Spillane’s answer to his critics. Believe it or not, Spillane was once the most vilified writer in America, universally hated by critics. (Ian Fleming suffered a similar fate in his home country.) They called Mike Hammer a sadist, a misogynist, a psychopath with a gun, and that’s basically what he was. These criticisms are embodied in the character of the Judge who berates Hammer at the start of the novel. The Judge hates Hammer and doesn’t bother to hide his hatred: Hammer is a threat to all decent, civilised society, and the Judge doesn’t understand why he’s still alive. For some reason, this really hits home for Hammer, and he walks along the bridge at night, seriously considering suicide when a girl comes to him for help. Briefly he feels like a hero again, like a big-shot, but when he shoots the fat man, the girl’s reaction is unexpected. She becomes terrified of him and commits suicide; for all intents and purposes, he has murdered her as well. You can imagine just what it does for Hammer’s confidence, and he spends the entire book questioning his purpose in life. Maybe I am a psycho, he thinks. Maybe the Judge was right. 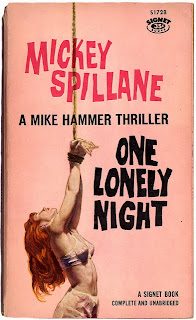 The Judge becomes a spectre who resurfaces throughout the novel to berate Hammer all over again, and these segments make for some brilliant reading. If for no other reason, One Lonely Night should be read for the unique insight into Mike Hammer’s character. Yes, this is the same Mike Hammer: he still loves to dole out violence, and even though it’s “tame” by modern standards, the joy with which the violence is described still makes me cringe. But that’s the point: in one scene at the end of the novel, Hammer goes on a bloody murder spree, all with a giant grin on his face which he can’t get rid of. And this grin, this inner joy Hammer feels, is considered and analyzed in detail throughout the book.

And yet Mickey Spillane managed to write a fast-paced book with plenty of plot and plenty of action. The girl’s suicide is just the first event: Hammer soon discovers that there is a link with the Communist party, and he infiltrates it. And that’s not all: a local politician is implicated in a recent murder which also has ties to the Communist party. And that’s all I really dare say about the plot, but believe me, there is much more. To my surprise, it was even fairly-clued, but to be honest, the seasoned mystery reader will have no trouble solving the case. One event in particular is so suspicious that I instantly questioned it and came to the right conclusion (revealed in the final chapter).

Much of the book is a vicious attack on Communism, and that’s only to be expected. As someone who was born in 1993, the Cold War is an event which I have glimpsed only through the eyes of history. One Lonely Night takes the Communist threat very seriously, though, and Hammer holds particular hatred for the Communists. While reading these parts of the book, I sort-of understood just why Mike Hammer was so big in a post-WWII world. People were disillusioned by the war; the world was no longer black-and-white and the law itself seemed useless, its hands tied down. This feeling is embodied in a scene where some Soviets hand a suitcase full of cash to accused traitors in the middle of a courtroom, in front of everyone there, as though the law could do nothing about it. 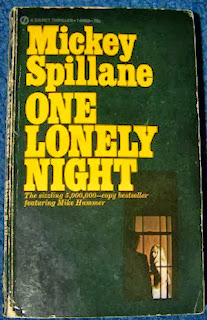 What conclusion does Hammer come to about his purpose in life? Well, if you want to find out, read the book. Be warned: it’s bloody, violent, and supremely dark. Mike Hammer goes to the pits of despair with nobody to keep him company, and he takes it out on those damned Communists. Some of the politics might be very out-of-date now, and when it comes to women, they’re just there for the sex. But damn it, there’s a real sense of conviction to this book. Spillane seems to have something he wants to say, an answer he wants to deliver to his critics. And honestly, the result left me stunned. I didn’t just “appreciate” One Lonely Night. I didn’t just consider this an intriguing or charming experiment. I friggin’ loved it. And to be honest, it's still a bit of a surprise that I did. (I have no idea what 2011 me would say if he could see me writing this now…)