The Case of the Constant Suicides 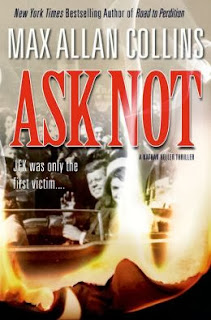 It’s 1964. Beatlemania is sweeping the nation, and Chicago private eye Nate Heller is taking his son to see the group live onstage. Heller is working security for the group, and as a result, he even manages to give his son one kick-ass birthday present when he brings him to meet the group and they sign a napkin for him. All in all, it was a terrific evening, even if the Beatles’ screaming fans threatened to permanently damage Heller’s hearing.

But I suppose something worse could happen. For instance, a car might try to run Heller and his son down, and damn near succeed at ridding the world of the feisty P.I. once and for all. But Heller’s son is too quick for the driver, and succeeds at getting his dad out of harm’s way. But Nate Heller got a look at the driver, and he’s pretty sure he recognizes him. It’s somebody that he dealt with almost a year ago, a Cuban who was connected with the plot to assassinate John F. Kennedy… in Chicago. The plot, described in detail in 2012’s Target Lancer, was ultimately foiled, but didn’t do much good: Kennedy met his death in Dallas a few weeks later, and the supposed assassin, Lee Harvey Oswald, was killed two days later by Dallas nightclub owner Jack Ruby.

The Warren Commission is about to conclude that Lee Harvey Oswald was a lone assassin, an anti-Kennedy, pro-Castro maniac who decided to kill the President and managed to do so. But due to his involvement in foiling the Chicago attempt on Kennedy’s life, Heller knows that the truth is far more complicated. He suspects that, due to his knowledge, some people in power might consider him a “loose end” that needs to be tidied up. He investigates, and discovers that all sorts of “loose ends” are being cleaned up. There’s a bad case of suicides sweeping JFK assassination witnesses, and Heller suspects that a clean-up crew is making sure the official story stands…

The assassination of John F. Kennedy is one of the most intriguing and frustrating murder cases of all-time. I have absolutely no opinion on the case, and I frankly don’t see what my opinion could possibly mean even if I had one. Thousands of books must have been published on the subject by now, and the source material is so contradictory that I have no idea what elements of the case are true, which are false, and which are somewhere in between. For instance, would it have been possible for a lone assassin to fire three shots in such a short time?

Person A says that's ridiculous.
Person B says Person A is a nut and can demonstrate that it is possible via experiment.
Professor C comes around and says that Person B based his experiments on flawed data, and that adjusting the experiment for that, it turns out it isn't possible after all.
Now Mr. D comes along and says Professor C is misinterpreting the experiment in order to push his own theory, and that in fact it’s possible, but the assassin would have to be extensively trained to pull the feat off.
Person E is from the CIA and has no comment.

And we can play this merry game of ring-around-the-rosy over and over and over again. As a result, I’m left at the side of the road with a confused expression, shrugging my shoulders and thinking: “Well, anything’s possible…”

That being said, Max Allan Collins has pushed forward an intriguing theory as to the identity of the “big players” behind Kennedy’s death. I have no idea to which extent Collins has fictionalised history – well, okay, I’m kind-of lying. Collins gives you a decent idea of just how much he’s had to fictionalise history in an extensive author’s note at the end of the novel, acknowledging his sources and admitting to such sins as time compression in order to make the novel a good story. But I’m not nearly well-versed enough in JFK lore to give additional comments. So to put aside all questions of historical accuracy, Collins has done a helluva job constructing a terrific and intelligent thriller. The plot is intriguing, it moves at a crisp pace, you get a satisfying ending, and it’s all done in 320 pages.

Has Collins proposed the definitive answer to “who killed Kennedy”? Well, you got me. For all I know, the Queen of England was the shooter, with the fake Paul McCartney helping her reload. But Collins' is a very persuasive solution for the purposes of this story, and it’s a perfectly plausible real-life solution as well.

And how can you discuss a Nate Heller novel without discussing Heller himself? I’ve become a big fan of this series over the past couple of years, and it’s become a treat to look forward to the next Heller novel. Heller is one of the all-time great fictional detectives. He tries to be an honest man in a dishonest world. Everyone around him has secrets, and Heller has his own fair share. He’s as honest as his surroundings will allow him to be, and in this novel he has to confront all sorts of tough types in order to get the results he wants. Although we know Heller’s a good, caring guy, when he confronts these men, he can be tough-as-nails and can mix it up with the best of them. The inspiration of both Phillip Marlowe and Mike Hammer is obvious, and the combination works wonderfully.

Overall, I can highly recommend Ask Not. It’s a terrific, fast-paced, intelligent and highly entertaining read. It’s wonderfully-written, it’s intriguing, and the ultimate solution is a satisfying one. However, it would probably be a good idea to, at the very least, read the preceding book in the “JFK Trilogy”, Target Lancer. Plot elements from that book are crucial to Ask Not and it would probably make the newer book more enjoyable if you know what happened to Heller a year ago.