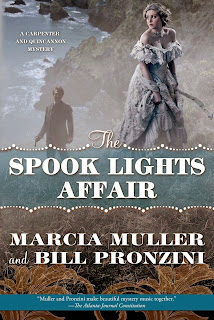 We open our story in the San Francisco of the 1890s. The detective agency of Carpenter and Quincannon recently solved The Bughouse Affair, a complex case that included a locked-room mystery. They could do without any overly-complex cases for a while. That’s what this job was supposed to be for Sabina Carpenter: she was basically hired as a babysitter, looking after Virginia St. Ives and making sure she doesn’t sneak off for a rendez-vous with her boyfriend, a man of whom her family disapproves. It’s true, Virginia was a little brat, but it seemed like the toughest part of Sabina’s assignment would be to refrain from slapping the girl.

But nobody could possibly have foreseen the outcome: at a fancy party, Virginia confronts Sabina and runs out of the house, only to commit suicide by jumping off a parapet. But when a group is organized to retrieve the body, it’s nowhere in sight… When a suicide note is discovered, the questions only get deeper. Why did Virginia St. Ives commit suicide?


Meanwhile, John Carpenter is out to get rich quick. He’s doing his very best to hunt down the Wells-Fargo robber, a man who boldly stole $35,000. The company has offered a ten percent reward – which translates out to $3,500. That kind of money would be highly appreciated in the coffers of Carpenter and Quincannon. But the leads never seem to pan out, and the hope for the reward money is starting to drain away.

Is there a connection between the two crimes? What about the mysterious “spook lights” that are introduced late in the novel – do they have anything to do with it? How were the two impossible tricks pulled off? And will the detective duo be able to claim the reward money? And what the devil is that blasted Limey, who claims to be Sherlock Holmes, doing in San Francisco? For answers, you’ll just have to turn to Bill Pronzini and Marcia Muller’s second Carpenter and Quincannon mystery, The Spook Lights Affair.

Originally scheduled for a January release, The Spook Lights Affair was moved up ever-so-slightly in its release date, which means that 2013 has seen the release of two Carpenter and Quincannon novels (The Bughouse Affair was released in January). If you really want to see more of the duo tackling impossible crimes, Crippen & Landru has a short story collection entitled Carpenter and Quincannon: Professional Detective Services, which was written by Pronzini. His wife Marcia Muller has joined him for the expansion into novel form, and the merging of their styles makes for a terrific read.

Carpenter and Quincannon are two distinct and fascinating personalities. Sabina Carpenter is a woman in a world ruled largely by men, but whose spirit is indomitable. She refuses to act the part of a delicate, wilting flower, and instead jumps right into the action as needed. She’s intelligent, resourceful, and has a keen deductive brain. John Quincannon is also very intelligent, but he’s got a boisterous, melodramatic streak running through him – he’d always prefer to present his deductions in a dramatic soliloquy, and resents having his thunder stolen. He’s also got a “thing” for his partner Sabina, and hopes to finally become her man of choice. And what better way to impress her than by claiming that $3,500 reward?

I really enjoyed The Spook Lights Affair, probably even more than The Bughouse Affair. It’s a rollicking good read, with a couple of good “impossible” situations thrown at the detectives. There are good clues and even one or two solid pieces of misdirection, one of which had me taken in completely. The impossible crimes have good solutions, and I particularly liked the second one (which involves a lack of footprints where there should have been some). In short, this is a well-plotted story.

The plot is largely the book’s focus, but it can develop characters with the best of them, and has a few neat atmospheric touches. The comic relief is also excellent, and I was pleased to see the return of the “bughouse” Sherlock Holmes. In the world of Carpenter and Quincannon, Holmes is a real-life detective and he is believed to be dead as a result of his fall from the Reichenbach Falls. Pronzini and Muller take a few good-natured cracks at Holmes, who does nothing but irritate John Quincannon. His tobacco smells positively terrible, his habit of delivering cryptic clues is irritating, and he sometimes seems to think that nothing could possibly be more fascinating than Sherlock Holmes. But this isn’t a mean-spirited parody; I get the feeling that Pronzini and Muller are both fans of Holmes, but would find him a tough man to live with.

Overall, I can highly recommend The Spook Lights Affair. Pronzini and Muller make for a terrific collaborative duo, and their styles complement each other well in this series. The plot is very good, and the characters are, as usual, fascinating. I highly enjoyed myself and I look forward to the next instalment in this series!