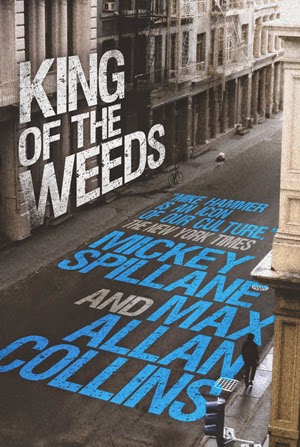 Mike Hammer is really getting too old for this job. He ought to retire sometime soon. Just this morning, as he was on his way to his office, he narrowly escaped an assassin’s carefully-aimed bullet thanks to a conveniently placed dictionary. But while the Mike Hammer of I, The Jury or One Lonely Night would have jumped up, pumped the bad guy full of lead and declared war on the guy who ordered the hit, this Mike Hammer needs to take a few minutes to catch his breath and recover. Who tried to kill him and why? It wouldn’t have anything to do with that $89 billion dollars Mike is hiding, would it?

Meanwhile, Mike’s good cop friend, Captain Pat Chambers, is dealing with a spot of trouble of his own. One of his old cases has come back to haunt him – it was the case that made Pat Chambers a captain, but years and years later, it seems that the wrong man may have been arrested. As though that weren’t enough, cops around the city are dropping like flies. Some get killed in the line of duty, some are in the wrong place at the wrong time, at least one of them drops dead from apparently natural causes. But all the same, the statisticians don’t like it – the odds of this many cop fatalities in so short a time are astronomical. And before long, Mike Hammer begins to concur with the statisticians.

This is the plot of Mickey Spillane’s King of the Weeds, the penultimate Mike Hammer novel. It was completed by Spillane’s friend and collaborator, Max Allan Collins, who also completed the final Mike Hammer novel (The Goliath Bone) and several others. And you can tell that Mike’s an older guy, but oddly enough, he seems to have less energy in this book than he does in the later The Goliath Bone. He has to take his time to recover from being shot at and generally complains of being old. Pat Chambers is getting ready to retire, and Mike should be getting hitched to Velda any time now. There’s a very real atmosphere in this book of the old times ending, of things coming to an end.

That doesn’t make it any less exciting than Mike’s usual adventures, though. Mike’s discovery of the $89 billion treasure trove is a tale worth reading on its own, but before long, he comes face to face with his very own version of Professor Moriarty, the titular “King of the Weeds”… who has some very sinister plans in store for Mike and his band of merry men. I don’t want to say much more for fear of spoilers, but believe me, it’s a terrific little story.

I enjoyed this book very much, but as usual, the plot is a bit easy to guess. It moves along swiftly and excitingly, but you can kind of tell what the final destination is a long time before it gets there. The strangest thing about this book, though, is just how old Mike Hammer sounds, much older than he sounds in The Goliath Bone, which was the final entry in the series. He’s still the same Mike Hammer, but I was surprised to see this side of him.

Overall, if you enjoy the Mike Hammer novels, you’ll enjoy King of the Weeds. It’s not my favourite Collins/Spillane collaboration – that one’s still Lady, Go Die! — but it’s a book well-worth reading, and I can’t really think of anything bad about this one. It’s a solid, entertaining read. I’m glad I shelled out the cash for a Kindle copy.