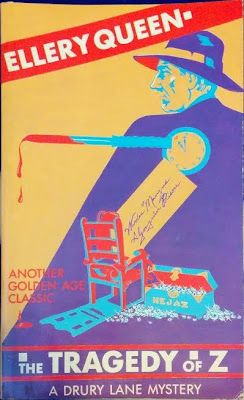 Ten years have elapsed since the events chronicled in The Tragedy of X and The Tragedy of Y. Drury Lane has gotten much older, and is frail and sickly these days. As for Inspector Thumm, he has retired and opened a detective agency, which is doing rather well. More surprisingly than that, we discover that Inspector Thumm has a daughter, Patience, who is the narrator of our story.

It all begins innocuously enough. Elihu Clay, an honest businessman (keep your smart-aleck comments to yourself), comes to ex-Inspector Thumm’s door for help. It seems his business is doing very well… indeed, almost too well. He has a silent partner, Dr. Ira Fawcett, brother of Senator Joe Fawcett, and he suspects the doctor is using his business to pull some financial hanky-panky on behalf of the Fawcett clan. Inspector Thumm accepts the case, but with little hope of success – although it’s widely known that Senator Fawcett is crooked, no one has been able to prove so in a court of law.

Thumm’s daughter Patience comes along for the ride, because even though she has no role in the investigation she’s a Liberated Woman. She hits it off with Drury Lane, making a couple of clever deductions about how the detective is spending his spare time. So when murder comes a-knocking and Senator Fawcett is bumped off, with the police eagerly seizing on the most obvious suspect, Patience consults the Great Detective and brings him onboard to solve The Tragedy of Z.


This is the third of four novels Ellery Queen wrote under the “Barnaby Ross” name. Each of these novels starred Drury Lane, surely one of the most artificial detectives ever created during the Golden Age. Lane basically lives in a Shakespearean mansion complete with a feudal village, which is only there because Shakespeare. I do not particularly enjoy Lane – in our last outing with him, he proved to be a delusional psychotic with a Shakespeare-obsession which I’m sure will get someone killed one day. 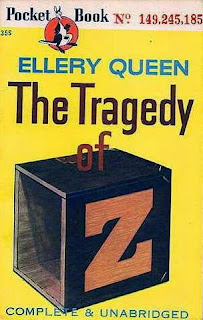 I absolutely loved the first instalment in the series, The Tragedy of X, which had an ingenious puzzle and a very good lecture which serves as the “dying-message” equivalent to Gideon Fell’s infamous Locked-Room Lecture. However, I did not like the sequel, The Tragedy of Y. I considered it a major step down – Drury Lane’s psychosis became more pronounced, there was an incredible amount of stupidity from the cops and Lane alike, and the solution was surprising only in the sense that it anticipated Agatha Christie by a good couple of decades or so. However, The Tragedy of Y had a couple of excellent points, namely the reason that the murder weapon in that novel was an antique mandolin.

Now we come to The Tragedy of Z, and good news: Drury Lane is almost normal in this book. Of course, we don’t see him for much of the book, which helps matters, but his SHAKESPEARE SHAKESPEARE SHAKESPEARE obsession is largely absent, and he manages to hold conversations without quoting Macbeth or comparing someone to the ghost of Hamlet’s father, which is nice. Sadly, to make up for this, we have to put up with Patience Thumm, one of the weirdest narrators I’ve ever come across, especially early in the story. Sometimes, the writing is just plain embarrassing, and you can tell that none of the members of “Ellery Queen” was a woman. She is a Liberated Woman, Don’cha Know, but she is also a member of the genus Womyn, which makes her silly at times. For instance, when she announces that she can prove the obvious suspect innocent, she does this while carefully applying lipstick (because a woman has to look her best, see, and nothing is more convincing evidence for a DA than a woman applying lipstick while insisting he’s full of baloney). If you know me, you know that I’m hardly the type to get offended at a perceived lack of feminism in GAD novels, but in the early parts of the book, it was a real chore to sit through this narration. When the puzzle really gets going, Patience settles down, but occasionally relapses into her silliness. Still, when all is said and done, I vastly prefer her narration to Drury Lane’s Shakespeare-fuelled mania from X and Y. 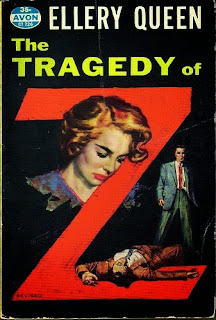 One of the best things about The Tragedy of Z is its stark look at the contemporary American prison system, which is interesting for both its historical detail and the pessimism at the life offered to convicts, a concern that is light-years ahead of its time. However, the very best thing about this book is its finale, which takes place in the death-chamber of the local prison during an execution, during which Drury Lane dramatically considers all of the possible suspects and methodically eliminates all but one. It’s not the most surprising solution in the world, and I anticipated it by a good 60-70 pages, but this scene is magnificent.

Overall, The Tragedy of Z was worth reading. There are some silly elements, especially related to Patience Thumm, but Drury Lane is comparatively normal, and the final scene is really excellent. The social commentary is both unexpected and historically interesting, and once the story finds its groove, the pacing is very good. The only real downside to it is the beginning chunk of the novel, where the story stalls, but if you can get past that you’re in for a pretty good read.