The Geometry of Murder 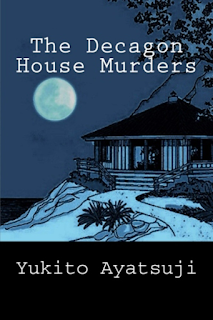 A group of people is stuck on an island, with no way off. Stuck on the island with them is a mad, cunning killer, determined to pick off the group members one by one. It’s a race against time, a deadly game of cat-and-mouse. No, I’m not talking about Agatha Christie’s And Then There Were None. Rather, I’m talking about a recently-published translation of a Japanese detective story: The Decagon House Murders.

The titular Decagon House is, of course, shaped like a decagon, and the island upon which it sits was recently the site of a gruesome series of murders. Naturally, a university’s mystery club (modelled on such a club at Kyoto University) decides the island is a great place for a club excursion. Thus the members meet up, each of them known by a pseudonym taken from one of the great Western Golden Age writers: Agatha, Orczy, Van Dine, Leroux, Ellery, Carr, and Poe. It doesn’t take long for murder to occur, and as the body count rises, the list of suspects gets shorter and shorter…


Locked Room International has become known in recent years for its work in the locked-room/impossible-crime subgenre, especially when it comes to publishing the work of Paul Halter in English. With its publication of Yukito Ayatsuji’s The Decagon House Murders, however, LRI has taken a bit of a different step from the usual. The novel was originally published in Japanese in 1987 (under the title Jukkakukan no Satsujin), and was credited with helping to resurrect the Golden-Age style detective story in Japan (the official term for this being honkaku). Another book that apparently helped this resurgence was 1981’s The Tokyo Zodiac Murders by Soji Shimada. Shimada played a big role in the success of Ayatsuji’s book – he promoted it upon its initial publication in Japan, and he now has fittingly written the introduction to this English translation.

This translation comes to you courtesy of Ho-Ling Wong, who runs a very good, informative blog. Unfortunately, I find myself being only a semi-regular reader of that blog – I often get very frustrated that I simply cannot read the books that Ho-Ling often reviews, and thus I learn how my non-French readers must feel when I review the latest Paul Halter novel. Ho-Ling must be commended for his translation of The Decagon House Murders – it is eminently readable. The prose style is easily digestible, and it made for really compelling, page-turning reading. I was excited to get further along in the book. 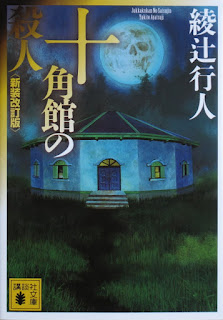 From what I can tell, Yukito Ayatsuji has minimal interest in character development in this book. What propels the book is the plot, and so the characters are drawn in a few hasty brush strokes. Agatha is the popular, pretty girl. Orczy is the not-so-pretty wallflower who likes to retreat into her inner world of fantasy. Ellery has a brilliant intellect, but is extraordinarily pompous (much like the early incarnations of Ellery Queen in that respect!). And so on. When this style works, I really admire this – you get what you need out of characterization, and no more. What fuels interest is the plot.

And boy, oh boy, is this plot ever a sweet one! Like Eric Keith’s Nine Man’s Murder, The Decagon House Murders must deal with the example that Agatha Christie left behind. Simply recycling her ending will not do. Eric Keith found a pretty good way out of that problem. Ayatsuji found an even better way.

Simply put, this is a stunner of a plot, with an ending which I simply could not believe when it was first revealed. When I put the book down, I realized that I had just read a book which rivals Soji Shimada’s The Tokyo Zodiac Murders for sheer audacity and ingenuity. Indeed, in my last review, I was able to unambiguously claim The Tokyo Zodiac Murders as my favourite Japanese detective novel. Now? Well… now, I’m not so sure. Now that I’ve read it, I have to say that The Decagon House Murders is a serious contender for that title. It has everything I want in a mystery. It left me satisfied with what I’d read, and eager to read more. I sincerely hope that this publication signals more to come in English from the Japanese honkaku school – it’s high time that someone wrestled the “Let’s-Publish-Everything-We-Can” Crown away from Scandinavian crime fiction and its countless imitators. Until then, you can count on me being at the front of the line waiting for more books like this.

The Decagon House Murders can be purchased on Amazon. Here is a link to the Kindle edition, which is excellently-formatted and proofread.