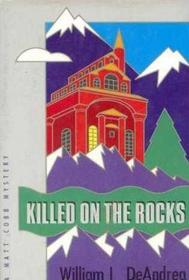 William L. DeAndrea has quickly become the most reviewed author so far on this (still rather young) blog, but can you really blame me? DeAndrea knew how to tell a good story without uselessly padding it out. He was clearly influenced by Rex Stout, and in this book, Killed on the Rocks, I noticed more than ever the way the detective, Matt Cobb, spoke in that unmistakable voice used by Stout’s Archie Goodwin.