The Adventure of the Petrified Prankster 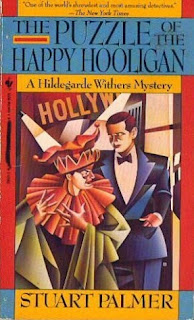 The Puzzle of the Happy Hooligan served as my introduction to the work of author Stuart Palmer, and more specifically, his series of novels starring schoolteacher Hildegarde Withers. The plot concerns the death of Saul Stafford, half of the screenwriting team of Stafford and Dobie. The duo is well known as the biggest pair of pranksters in Hollywood, and it seems that someone decided enough was enough: Saul Stafford was found in his office with his neck broken. The policeman summoned is all too willing to accept that it was an unfortunate accident.
Luckily, who should move into the office next door that very afternoon but Miss Hildegarde Withers? Originally having planned to spend her vacation in Europe, Miss Withers decided she’d much rather see Hollywood after Europe, in Palmer’s words, exploded. (The book was first published in 1941.) Just her luck, a man named Harry Wagman sees her, recognizes her as a detective, and offers to get her a job as a technical consultant on an upcoming film about Lizzie Borden. Miss Withers spoke to Stafford before the man met his maker, and realized that the man was frightened to death: she blames herself for his death and determines to track his killer down.
The thing is, nobody heard any noise whatsoever coming from Stafford’s room. If it was an accident, surely there would have been a sound? But if it was murder, surely the victim must have struggled, fought— why, then, was there no noise from that? Besides, there were no signs of violence on the body… Why yes, it’s another impossible crime… only one of the most disappointing ones I’ve ever read. The question “How was it done?” is flaunted throughout the entire novel and is a genuine puzzler, especially when the police interview a few doctors and all of them insist it’s impossible for someone to break another person’s neck without signs of violence. But don’t be fooled: this book does not propose an ingenious way of breaking someone’s neck with a bowl of turtle soup, a length of wire, and three potatoes. In fact, after all the build-up, the solution to the how is a major let-down. Not only that, it’s fairly obvious who the killer is, and the person has no qualms to confessing to Miss Withers with just about no evidence while the police conveniently listen in outside the door. I was going to cry “Foul!”… and then, Stuart Palmer comes up with one of the funniest and most original explanations for why the killer confessed that all my objections gave way to applause. All I can say is “Bravo!”
Don’t let my criticism give you the wrong impression: I enjoyed The Puzzle of the Happy Hooligan very, very much. The plot moves very rapidly and is absolutely fascinating. Midway through the book, it employs a plot device that is very old and rather cliché— and yet, it manages to seem fresh and exciting. It’s one of the best uses of this plot device I’ve ever encountered. The characters are all very fun— it is a humourous and delightful romp, as Stuart Palmer brings all sorts of caricatures of Hollywood figures to the murder party. The work on the Lizzie Borden film is absolutely hilarious, and some of the suggestions on “improving” history would have even made Mr. Aaronson (in John Dickson Carr’s And So To Murder) blush! Stuart Palmer, who I believe worked as a screenwriter in his career, brings to life the insanity of the film studio in a wacky and delightful way that is well worth the read.
As for Miss Withers, she is a perfect detective: witty, shrewd, and delightful. Her partner in crime is Inspector Piper of the New York police department, who midway through the story boards a plane just to join in the fun over in Hollywood. The interactions between the two are wonderful: they play off each other very well, even though they spend little time actually together in the book. They must be among my favourite recently-discovered-by-me sleuths.
Overall, The Puzzle of the Happy Hooligan is problematic in terms of its mystery, but a delightful romp that you shouldn’t miss. Expect the worst from its impossible crime and you’ll probably enjoy it even more than I did!