Revenge of the Mad Hatter 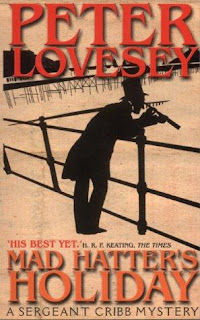 Brighton, 1882. It is the height of the vacationing season, and Albert Moscorp is the protagonist of the story. While on vacation, he becomes involved with the family of Mrs. Zena Prothero, a beautiful woman married to a doctor who seems ignorant of her attractive qualities. But of course, this is a mystery, and after a bit, murder intervenes to cut someone’s holiday short… It is a grisly murder case, in which only a select few of the limbs are recovered by the police: the victim’s severed hand, as it happens, is found in the aquarium’s alligator cavern…
First off, let’s get my major problem with this book out of the way at once: I hate the character of Albert Moscorp. He is a disturbing and frankly psychotic creation: he spies on the entire beach through his various binoculars and telescopes. When he sees Zena Prothero through the lens, he takes plenty of pains to acquaint himself with the family, justifying it all in the name of science. How does he manage to introduce himself to Mrs. Prothero? Quite simple: he kidnaps their young child when they’re not paying attention only to return it. It is a frankly alarming sequence which had my jaw hanging wide open as I waited to see whether we would enter the domain of pedophilia or not. The voyeuristic delights Moscorp takes are creepy: like Drury Lane, he is an unsuccessful, unlikeable experiment, with eccentricities taken to the maximum. This is the main character, folks… The person I would estimate we waste well over half the book on… Enjoy!
The detective duo of Sergeant Cribb and Constable Thackeray are called in to solve the case. Cribb seems a rather competent individual most of the time, but Constable Thackeray gives you the feeling of “The lights are on, but nobody’s home.” Thackeray gives us a lot of the best comedy in the book, such as when he describes a lady he interviewed while she was lying in her bed:
“Oh, a regular beauty, Sarge! No question of it. A face like a china doll and a show of red hair I’ve never seen the equal of. I suppose she wears it different when she goes out, but it was hanging loose down her back when I saw it. I don’t know what she’s like dressed and on her feet, Sarge, but she’s a stunner in bed, I promise you!”
The duo does a decent job playing off of each other, and I’m glad that Lovesey didn’t go into their various pasts and so on. I get the feeling that the less you know about them, the more interesting they are.
The historical setting in Mad Hatter’s Holiday is extremely boring. The attempts to give the tale historical colour are often eye-roll-worthy, such as the oh-so-ironic beliefs Doctor Prothero has on the relationship between disease and seawater. The background is simply bland. It’s like a literary potluck: you have to bring your own historical colour.
Near the end of the novel, a second death occurs which, if murder, can only be an impossible crime! My interest picked up, and the answer is genuinely clever. The intricate details behind how the trick was pulled off are absolutely brilliant. Unfortunately, the main idea of “howdunnit” is so bloomin’ obvious, the police investigator, Sergeant Cribb, looks incredibly dense taking as long as he does to figure out how it was done.
Peter Lovesey has a very fun sense of humour and it comes in quite handy sometimes. Consider this passage, for instance, where Albert Moscorp observes a woman bather in a red-and-white suit swimming with a male (GASP!!! They’re even holding hands, if you please!!!) in a blue bathing suit: 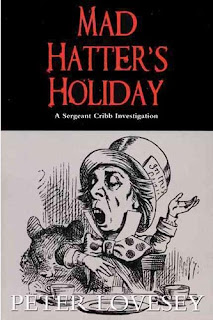 Then, as he watched, she was caught in the cusp of a larger wave, tipped off-balance and swept several yards inshore, shrieking in delighted panic, and ending inelegantly on hands and knees in the shallows. From there she subsided, laughing, into a sitting position, tugging down the sailor collar that had ridden up around her head. How it was that her companion was thereupon similarly upended by the action of the water and carried irresistibly towards the same spot must remain one of the ocean’s mysteries. Suffice to say that the next moment Moscorp saw the red, white and blue in a conjunction that had nothing to do with patriotism.
Unfortunately, in this book, you tumble to whodunit by the same process of elimination as in George Baxt’s The Affair at Royalties: simply select the most psychotic character, and you have your killer! There certainly isn’t any other evidence pointing in X’s path… but the character is such a psycho, it’s a wonder he/she/they/it were allowed to walk around loose as long as they were.


And with the solution, Lovesey seems to be trying to cement his characters as good ones. The problem is, they have been walking caricatures for almost the entire novel: the womanizing husband, the innocent wife, the bratty child… It just doesn’t work.
There are many encouraging signs about Peter Lovesey: there’s an actual attempt here to create a clever plot, albeit with mixed results, and when Lovesey isn’t preoccupied with developing Moscorp’s character or throwing historical stuff your way, the story is told in a fun style. I suspect Lovesey would work better writing in a modern day setting. Overall, Mad Hatter’s Holiday (which really has no other connection to Alice in Wonderland or that delightful character its title refers to) is an entry into mediocrity with a few points of interest.