Written by Patrick
“He liked his John Dickson Carr,” said Julie, standing in front of the books. “He’s got at least forty here. The other writer he collected has a similar name in a way—Carter Dickson. I wonder if there’s a connection.”
—     Julie Hargreaves while examining the victim’s books, Bloodhounds 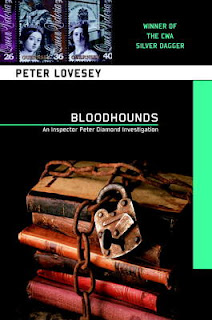 My introduction to Peter Lovesey’s work was far from the best— I read and was disappointed by Mad Hatter’s Holiday. The second Lovesey I read was far more encouraging— Rough Cider was written remarkably well, with a colourful setting and excellent characters that fuelled my interest in the book. Although I highly enjoyed it, it didn’t quite convert me into a fan— but when I opened Bloodhounds, I had high expectations. After 120 pages, I could safely say that I was now a fan of Peter Lovesey.
Bloodhounds is a delightful book from start to finish. It’s a marvellous tip of the hat to the Golden Age mysteries I admire so much, and in particular to my favourite author, John Dickson Carr. Lovesey creates a group of characters who are mystery enthusiasts— they call themselves the Bloodhounds and they meet once a week to discuss mysteries. They are an unusual and very mixed lot— some, like Rupert, like “crime noir”; others, like Milo, enjoy classical puzzles. Through these characters, Lovesey gets a lot of talk about mysteries going, bringing up some decent points but also getting across a sense that the author enjoys mysteries too. You’ll find none of Julian Symons’ general air of condescension here.
Meanwhile, a valuable stamp goes missing after a cryptic riddle was sent out to the media and the police. Peter Diamond is annoyed that one of his colleagues stole some of his best people for a futile stake-out job, but he is suddenly thrown into the mix-up. One of the Bloodhounds discovered the missing stamp in intriguing circumstances at one of the weekly meetings and went to report it. When, accompanied by an officer, he returned to his boat (where he lives), they discover the cabin securely locked, but the corpse of one of the Bloodhounds is lying on the floor…
The plot is deliciously intricate, but that’s ironically one of its failings. Its ending is clever, with a good motive, but there’s only one real clue pointing the killer’s way, and it’s far from being conclusive. There’s an alternate theory Diamond discards for no reason at all that I could see, which adds to the general weakness of the conclusion. And, finally, I had a completely different solution to the locked room worked out, which would have been an homage to a John Dickson Carr novel and a rather clever twist at that. It also relies on less luck that the ultimate solution to the locked-room trick does. Still, it has its interesting elements— I really liked the motive for the mysterious events, and its intricate multiple solutions are interesting and a nice homage to the complex plots of the past.
And yet I didn’t really mind too much at the end of the day. Lovesey’s storytelling is really good, with a charming sense of humour I enjoyed very much. Consider, for instance, how he plays around with John Dickson Carr’s The Hollow Man and its alternate title, The Three Coffins, when the police look through the dead man’s belongings:
“On the passenger seat we found a plastic bag containing a second-hand copy of—you guessed—a John Dickson Carr novel.”
“The Hollow Man?”
“No. The Three Coffins. I haven’t read it yet.” 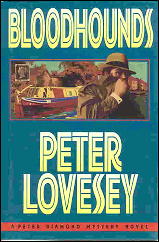 Of course, Brownie points go out to Lovesey for extensively talking about John Dickson Carr. Hey, he’s my favourite author. Mentioning him (when he seems almost forgotten nowadays) doesn’t hurt at all. I liked the discussions the Bloodhounds had, even if I disagreed with about half the opinions expressed, such as analysing the “ridiculous” twist ending in a very famous Agatha Christie novel, which I found sublime and excellently worked out. (Unlike the many, tiresome carbon copies it inspired. And ironically, John Dickson Carr wrote an excellent novel that seemed to be going for precisely that effect until you reached the stunning twist ending. Sorry, I’m not mentioning titles.)
I also really liked Peter Diamond. He’s an interesting character who dislikes all the paperwork involved in modern policing, and it’s really nice to see a detective who is married and doesn’t have extensive marital issues. He and his wife form an appealing couple, and the scenes we get of them at home are delightful.
Overall, despite the weakness of its conclusion, Bloodhounds is a very fun read that I highly enjoyed. It is particularly a tribute to the master of the locked room, John Dickson Carr, and Peter Lovesey’s writing is enjoyable, with a good sense of humour that made the reading highly pleasurable. All things considered, it’s a blast.