Come and be grilled... 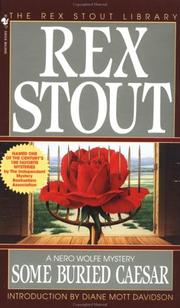 There are a few reasons I omitted Rex Stout when I covered various forgotten Crime Kings. For one thing, reprints have been relatively kind to Stout, and Nero Wolfe and Archie Goodwin are still fairly popular, as evidenced by The Wolfe Pack. Heck, there’s even a recent, brilliant TV series based on the Wolfe novels! So I felt justified in putting Stout off, and probably wouldn’t have gotten around to reading him before I leave for Spain if not for Henry Wade’s Heir Presumptive, a book so brilliant it made elongating the Crime Kings series seem rather superfluous.
After making my initial acquaintance with Rex Stout’s work, I read a few randomly-chosen Nero Wolfe novels (including Champagne for One, Too Many Cooks, and Too Many Clients) before deciding it would be best to read the series chronologically. The last time I read a Nero Wolfe was the book Over My Dead Body, which was the result of an accidental error in my chronological shelving system. So at long last I’ve returned to the book I accidentally skipped: Some Buried Caesar.
The great strength of the Nero Wolfe novels lies not in plot but in storytelling, specifically the narration of Archie Goodwin. Without Archie, the Wolfe novels would be another series about an eccentric detective who pulls deductions out of a hat with little fair play behind it. Occasionally, Stout threw a great clue into his narrative—as in Too Many Cooks, for instance—but for the most part, characterisation and dialogue fuel the reader’s interest. The banter between Nero Wolfe and Archie Goodwin has provided some of the most fun moments I’ve ever had reading mysteries.
Some Buried Caesar came highly-touted as a masterpiece before I read it, and I can see why. It’s definitely one of the better entries in the series. Archie Goodwin is wonderful as always, and Nero Wolfe, usually confined to his brownstone, is actually forced to leave his natural habitat in this novel. This provides for a lot of excellent banter between the two, and results in some brilliant scenes, such as when Nero Wolfe is forced to seek refuge from a bull in a pasture. Wolfe and Archie are a unique and delightful combination— Archie, the hardboiled sleuth and man of action, is forced to tolerate Wolfe, the lazy and eccentric armchair sleuth, thus fusing the genres together in a unique way. But I think most readers will agree with me when I say that Archie consistently steals the show. 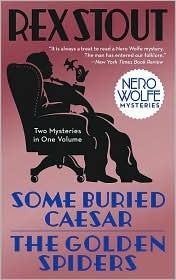 The “Caesar” referred to in the title is Hickory Caesar Grindon, a champion bull bought for $45,000 by millionaire Tom Pratt, who intends to barbecue the bull as an advertisement for his business. (This was the 1930s.) However, a young man named Clyde Osgood makes a bet with Pratt that he will not barbecue Caesar at all that week… and is promptly discovered dead in the pasture, apparently killed by the bull. The authorities seem satisfied to pin the crime on Caesar, but Nero Wolfe (after securing a fat fee for himself) applies some elementary brainwork to the case and proves that Clyde was murdered.
This book is particularly notable for the introduction of Lily Rowan, Archie Goodwin’s love interest. The scenes between the two are plenty of fun. Their dialogue just sparkles with energy and wit. It’s a delightful combination and results in plenty of fun moments, such as when Archie persuades Lily to impersonate his mother and give Nero Wolfe hell. (It’s a long story…)
As much as I enjoyed reading this book, I’m afraid I wouldn’t bestow it with the term “masterpiece”. The Wolfe books, delightful as they are, are extremely weak in terms of puzzle. Stout’s clues are rarely fair—they are simply springboards from which Wolfe sends someone to collect evidence for him to make a deduction from. Some Buried Caesar is not much different. The twist ending doesn’t really come as a surprise—I anticipated it even without any really good clues being offered. It’s not the most original or mind-boggling twist in the world, and it lacks the impact of Too Many Cooks, The Rubber Band, or The League of Frightened Men.
This book is rather like The Red Box, in that Nero Wolfe ultimately has to manufacture evidence to crack the case. The only reason this isn’t nearly as annoying as The Red Box (which ended on a very sour note) is that Wolfe admits much more quickly that he has to do so. Unfortunately for the reader, this doesn’t disguise the weakness of the clues. You don’t really have much to go on and it just leaves you shrugging your shoulders, thinking “That’s it?” 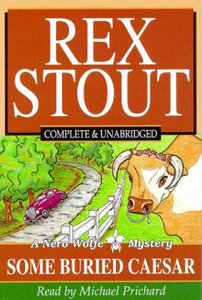 Despite delightful ideas and a brilliant execution, the weakness of the conclusion puts somewhat of a damper on the experience of reading Some Buried Caesar. It’s worth reading for the introduction of Lily Rowan alone, and there’s plenty of fun stuff to be found, but the clues are typical of the Nero Wolfe novels and left me disappointed. The pre-reading hype had me expecting solid clueing, similar to Too Many Cooks. You won’t find that here—the reader is warned.
However, I still recommend the book and think it’s a downright shame that it wasn’t adapted as part of the excellent Nero Wolfe TV series starring Timothy Hutton and the late Maury Chaykin. In the comments on my last post, Christopher made an excellent point: one of the reasons this book was skipped over is due to a murder weapon being anthrax, which was still quite a scare at the time the TV series was being made. It’s a shame the TV series was cancelled, and the death of Chaykin puts an end to any hopes of a reunion. The series is brilliant but tantalisingly incomplete.