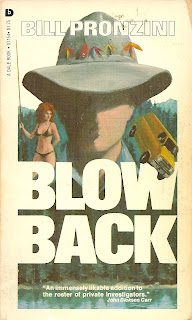 The last time I looked at a Bill Pronzini novel, it was Camouflage, the latest entry in the Nameless Detective series, published in June of this year. It is somewhat fitting then that I return to the series with Blowback, the fourth book in the series, published in 1977. My copy of the book comes complete with a quote that declares the main character is “an immensely likable addition to the roster of private investigators”. It slightly shocked me when I realized that the quote was attributed to my favourite author of all-time, John Dickson Carr. In 1978, the year my edition was printed, Carr could still sell books. My, how times change.
Blowback is a fairly short novel, but it is jam-packed with events. It all starts when the Nameless Detective gets a call from an old friend and fellow WWII veteran, Harry Burroughs. Harry owns and runs a small fishing camp, and invites Nameless to spend some time there, as he would like to ask him a favour. Nameless is waiting for results of a test—he has a lesion on one of his lungs and is waiting to hear whether it is benign or malignant. Waiting it out alone over the weekend doesn’t sound like much fun, so he decides to accept Harry’s invitation.

When he arrives at the camp, he finds that the atmosphere is like that of a pressure cooker’s, and it is liable to explode. It all centers on the beautiful Mrs. Angela Jerrold, for whom the term “sex bomb” may have been coined. Her husband, Ray, has recently become an alcoholic and is convinced everyone at the camp is trying to make a pass at his wife. He spends all his time drunk and arguments are flaring up left and right over Mrs. Jerrold. In fact, Nameless is convinced that someone could get seriously hurt.
Well, this is a mystery, so someone obviously does get hurt, but it comes from a surprising quarter, as a shady dealer in Oriental rugs is murdered. Nobody from the camp claims to have known the man, whose presence in the neighbourhood causes surprise. Nameless is soon hired to recover a stolen Oriental rug, and he sets out to find out who the killer is.
The puzzle contains interesting elements, but the solution is somewhat half-hearted. Some clues which seem reminiscent of traditional Golden Age fiction turn out to be hollow shells of clues, backed up by nothing particularly concrete except for Nameless choosing to interpret them in such-and-such a way. Even Nameless realises his deductions are weak and comments on this, though his explanation ends up convincing his listeners and the reader nonetheless. 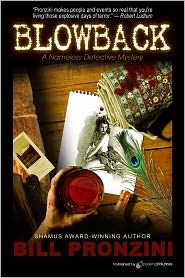 However, what really makes this story work is Nameless himself. He undergoes a personal struggle while waiting to hear from the doctor—is the tumour malignant? Benign? He has to come to grips with himself as a person, a detective, and with his mortality. He desperately resists the urge to smoke and has many “philosophical” moments where he simply sits and reflects. These are all highly effective, even though I knew what the test results would be from reading later entries.
Basically, Blowback is a solid read. It nicely showcases Bill Pronzini’s talents as a writer, combining hardboiled elements with traditional plotting. Unfortunately, the plotting aspect is weaker in this novel, but it really doesn’t detract much overall— the book is still extremely enjoyable, mainly due to the Nameless Detective and his wonderful personality.