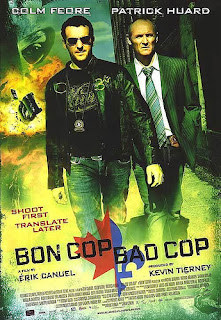 Bon Cop Bad Cop is a very Canadian film. It is a mystery, a thriller, a cop/buddy movie and a comedy rolled into one, and it has two very Canadian things at its core. The first is the noble pastime of hockey, a truly Canadian sport. The second is the relations between English and French Canadians, which have not always been the most cordial. In October of 1970, it escalated into violence when members of the Fédération de libération du Québec (FLQ) kidnapped James Cross and murdered Pierre Laporte. It was the only time in Canadian history that the War Measures Act (ie marshal law) was imposed during peacetime.
There are a few reasons for this (all too brief) digression on Canadian history. Like I said, it’s important to understand that French Canadians and English Canadians have not gotten along well in the past, as this plays a key role in Bon Cop Bad Cop. But my other motive is simply a love of history in general, and the October Crisis holds a strange fascination for me.
Bon Cop Bad Cop is, like the title suggests, a movie in English and French. Both languages are often used (French somewhat more than English) and there are subtitles for those who don’t understand one language or the other. Happily, though, I was quite at home, understanding the Québecois French without much difficulty. The movie involves two police officers: Martin Ward, a by-the-book Ontario police officer, and David Bouchard, a tough-as-nails Québecois who creates his own rules on the streets. A corpse is found on the Ontario-Québec border, and the police departments decide this is a unique public relations opportunity for them: instead of one side handling the case, they will cooperate. Besides, it might help to increase next year’s budget.
Only this isn’t the last corpse. A tattoo is found on the victim, one that was started while he was alive and was completed when he died. This tattoo points to the next victim, who is also discovered with a tattoo. Thus begins a series of cryptic riddles as the Tattoo Killer strikes again and again, with everyone apparently having some sort of connection to the hockey community.
This is ironically the film’s greatest strength and its failure. If you don’t know your hockey, the identity of subsequent victims are unfairly clued. (Also, the criminal mastermind ends up being a character you've never seen before.) Even if you know your hockey, it’s technically unfair clueing, because the movie’s universe is semi-fictionalised: the killer’s motives and targets are all fictional, but inspired by real-life events and hockey players, such as Eric Lindros’ concussion problems or the infamous trade of Wayne Gretzky to the Los Angeles Kings. And yet, it is remarkably witty and clever, which I think is done more out of necessity than anything else. Basically it avoids lawsuits. This particularly holds true in the case of the current NHL Commissioner, Gary Bettman, who is often credited as the man who has ruined hockey and turned it into an Americanised business venture. The movie obviously endorses this view, but I doubt Bettman would be pleased with the scenes where “Commissioner Buttman” has his life endangered. 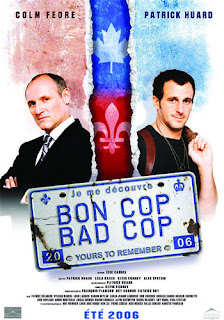 Remarkably, the movie plays very much like a hardboiled novel would. There are scenes where David and Martin question suspects, and things get a little rough (resulting in a memorable bilingual bar fight). The “tough” events are seen from Martin’s perspective, as someone new to this kind of thing, which ups the comedy ante somewhat. There are other good moments of comedy, like when David teaches Martin the finer points of Québecois French (and the profanity they use). There are jokes in English and there are jokes in French, and most of them work.
Although it doesn’t hold up as a fair play mystery, Bon Cop Bad Cop never claimed it was, and it never tries to be something it isn’t. It is a very fun movie with a thrilling plot, and its semi-fictionalised hockey community is delightful, particularly in terms of spotting references to the real-life NHL. It’s not the best Canadian comedy I’ve seen—that honour would go to the TV series Corner Gas. But it’s a very fun ride and I think mystery fans would be entertained. I was.

Though this review fits nicely into the hardboiled theme of my recent reviews, I admit that the recent tragedy in Russia was behind my decision to review this film: a plane carrying the KHL's Lokomotiv Yaroslavl hockey team crashed, killing 43 people, including several ex-NHLers. I was a fan of several of these players, like Karlis Skrastins and Pavol Demitra. Hearing about this tragedy was a shocking experience- I stared at my computer in disbelief for several minutes and read on in shock. This accident follows three NHL deaths in the last few weeks as Derek Boogard, Rick Rypien, and Wade Belak all tragically passed away. Words cannot express the deep sorrow felt throughout the hockey community- we have lost not only players but wonderful people who were loved by their family, friends, teammates, and fans. I extend my condolences to all those who have been personally touched by this horrible tragedy.