So Long, My Sweet 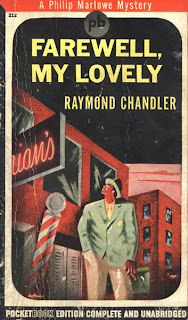 Earlier this year, I attempted to struggle through Raymond Chandler’s The Long Goodbye and failed. The book started off well, but at the point at which I gave up, the plot was going nowhere, you could see the ending coming for miles ahead, and it was so overly padded that I simply couldn’t face the prospect of finishing the book. I put it down, wrote a harshly negative and sarcastic series of comments, and concluded that, after all, Raymond Chandler couldn’t write, and his stories were no more realistic than those he blasted in his famous essay The Simple Art of Murder.
So perhaps it’s only fair to give Raymond Chandler another go. My motives were not entirely altruistic; I’ve been preparing to paint my room, putting all my books into boxes and the like (which, by the way, resulted in my desk falling apart yesterday, which will make a lovely start to the school year). So I’ve been listening to an audiobook, and Chandler’s Farewell, My Lovely was the only one of his I could find which I hadn’t read yet. I had no intention of returning to the frankly incompetent The Big Sleep, and my thoughts on The Long Goodbye are already well-known.
Farewell, My Lovely opens with a scene that immediately grabbed my attention… for all the wrong reasons. Chandler’s Phillip Marlowe is walking down the street, Commenting On Society and sounding like the brat who abruptly took over the show in The Long Goodbye. He sees a big man, Moose Malloy, getting into what looks like trouble. Well, trouble is his business, so Marlowe goes skipping along to comment on what kind of filth society produces. Only it backfires on him, as Malloy grabs him by the shoulder and drags him upstairs to Florian’s, a place where his girl Velma used to work. The scene is one of the most unintentionally funny ones I’ve ever read. Marlowe desperately wants to be a ratbag and say something clever (read: annoying), but after seeing Malloy’s strength, he decides keeping his mouth shut might be a better policy. 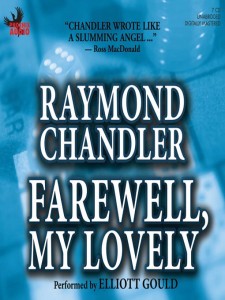 Long story short: Malloy, who has just gotten out of prison, is looking for this Velma dame, see, and he tosses the bouncer, kills the manager, is sure to subtly point out that he is mentally retarded, and goes his merry way. The police for once don’t beat up Marlowe on the spot (in fact, Chandler almost got through the book without the customary police beating, but it wouldn’t be a Chandler without that, would it?). Instead, they cooperate, and Marlowe gets a lead on the Velma angle. Then he’s hired for a job by someone else, and the story starts to get interesting after that, with the introduction of a plucky female character I really liked, Anne Riordan. See, women in Chandler generally fall under two categories:
(i) An empty-headed, pretty faced girl whose job it is to sleep with the hero or turn out to be the villain
(ii) A total witch, be it a shrewish wife or an elderly lady against the consumption of alcohol. Often our red herring for the evening.
Anne is neither of these. Instead, she is her own character. She is young, energetic, shows some promise in the detection department, and she shows intelligence without being the cool, calculating hag that any woman with brains usually is in Chandlerverse.
In fact, that seems to be the theme for Chandler this time around: there are a lot of decent people in the world, Marlowe says at one point, and for once, it’s true! The cops cooperate with Marlowe instead of beating him, even though they try to act tough at first (the reason is revealed at the end). Marlowe is more subdued than usual, throwing out the occasional snarky comment but without being a ratbag about it. A woman is allowed to be a three-dimensional character without being the Evil Temptress Chandler was so obsessed about. Add these things together, and what you get is a very agreeable reading experience.
In fact, there’s only one serious drawback: the plotting. Chandler couldn’t plot to save his life. The entire twist is so obvious, I predicted it almost as soon as the culprit was introduced. The attempts at misdirection are laughably amateurish. The ending doesn’t feel like it explained anything, it was just a general exposé:
MARLOWE: You’re the killer, goddamit! I know because you came in here with a gun in your hand, thinking I was close to fingering you!
KILLER: Fine! I did it, see? And I’m glad I did it! Glad! But you won’t take me alive!
[cue climatic gun showdown with either a stupid murderer, a lucky private detective, or faulty information about guns… or a combination thereof] 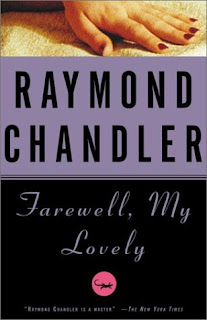 Overall, despite the poor plot, Farewell, My Lovely is a readable book, largely due to a cast of characters that is mostly sympathetic. Unlike The Big Sleep and The Long Goodbye, the plot actually goes somewhere and isn’t padded out to the extreme. There’s only one moment of obvious symbolism involving a bug, and that’s over after a chapter and alluded to only once or twice. The book even contains references to classical detection, with references to Dr. Thorndyke, Sherlock Holmes, and Philo Vance. Although the plot feels improvised rather than constructed, the book is pretty readable overall, and Phillip Marlowe is generally likeable. There are only a few moments when he preoccupies himself with being rude, and sometimes the reader feels he’s justified. After all, there’s only so much a guy can take.
On a side note, entirely unrelated to the book, the audio recording I listened to was narrated by Elliott Gould, whose voice is stunning for this kind of novel. Only there’s one thing— when Marlowe deals with a psychic who is obviously a fake, Gould shifts into a voice that sounds like a dead-on impression of Nero Wolfe!!! Now there’s a shocking twist ending for you!