Written by Patrick
"Now, did you hear anything unusual during the evening?"
"Well," said Mrs Love, after pausing, unprecedently, for reflection, "there was a weird play on the wireless, very intelligent I expect, but not the sort of thing I like, they do broadcast such extraordinary things sometimes, I dare say Andrew would have made something of it, I always felt with him that I had so much to live up to in a way it was a strain."
—An interrogation from Love Lies Bleeding 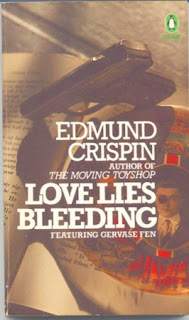 Mystery scholar extraordinaire Curt Evans has recently joined the blogosphere, creating a highly promising blog titled The Passing Tramp, which is certainly worth a look! Some attention has been paid early on to the work of Robert Bruce Montgomery, alias Edmund Crispin. Crispin authored a splendid series of comic detective stories in the Golden Age vein that starred English professor Gervase Fen. Crispin was inspired by John Dickson Carr’s The Crooked Hinge, and Fen is intended as an homage to Dr. Gideon Fell, sharing his initials and even referring to Fell as a real person in The Case of the Gilded Fly.
Earlier this year, I read Swan Song, which was an excellent book, but the publisher, Four Square Press, absolutely ruined it for me by spoiling the twist ending on the front cover and again on the back cover. (The plot summary also makes some stupid mistakes in summarising the plot.) I’ve slowly been reading the entire Gervase Fen series in order, and so, thanks to Curt’s recent posts, I decided to read Love Lies Bleeding (most of it I read on audiobook while at work—but I left off at such a tantalizing point that I read the final 30 pages myself). After my experience with Swan Song, I decided not to look at the back of my copy of the book…
And it’s a good thing I did, too. Why do some publishers feel the need to spoil mysteries on the back (or front) cover? Admittedly, the spoiler is more ambiguously-worded than Four Square’s abomination, but it gives a major hint about which way you need to look, and I find that absolutely deplorable. The culprits are Hamlyn Paperbacks this time, in a 1984 edition that gives substantial hints about the nature of the solution.
Now that I’ve given my ominous warning, I’d like to move on to the actual book. Love Lies Bleeding marks a return to the academic setting— although Oxford university, for once, has succeeded in keeping potential murderers at bay. Instead, a specimen of Assassinus murdericus has been shipped to Castrevenford School, where a double murder takes place one night, both the victims shot. One of the victims was named Love—hence the title. I don’t really want to say too much about the plot, because it’s one of those books where you’re better off discovering it for yourself. Suffice to say that Gervase Fen is nearby and conveniently-placed to do some sleuthing, and the fun begins!
This is simply put the best Crispin I’ve read thus far— and yes, I have read The Moving Toyshop. However, this book shows Crispin in full bloom as a mystery writer— he places excellent clues throughout the entire narrative, building up to a fairly-clued, but entirely unexpected, climax. It’s skilfully done. Admittedly, the final explanation is somewhat long, but it’s great to see Crispin detailing not just whodunit, but also how Fen deduced it, why he delayed revealing the solution, and why only X could have been the killer all along. It requires a bit more wordiness, but Crispin raises nearly every conceivable logical objection to the plot and answers these questions satisfactorily. The result is a highly satisfying detective story. 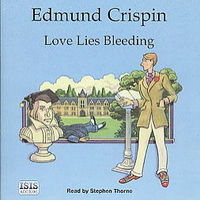 Yet Crispin’s skill is not just limited to crafting a fine mystery—what particularly distinguishes his books is a delightful sense of humour throughout the proceedings. This is pulled off with great success in this novel. There are some very funny moments, one involving a Bible that is destroyed out of necessity. Crispin was also quite skilled at coming up with animal characters, and he does just that in Love Lies Bleeding by creating the character of Mr. Merrythought, an elderly dog prone to fits of homicidal mania. It really is quite a treat, as Fen cannot understand why everyone insists the dog seems to like him. (Also, a duck makes a brief cameo appearance, but we don’t see much of it.)
And there are some really neat moments of self-referential humour. Crispin’s most famous moment of this sort probably appears in The Moving Toyshop, when in the middle of a chase, the characters decide to go left because Gollancz is publishing the book. Here, Gervase Fen meets a young girl who claims to be a big fan and has followed all his cases. Fen beams and, quite pleased, declares “That’s more than Crispin’s readers manage to do.”
Overall, I’d unreservedly recommend Love Lies Bleeding. It’s got all of Crispin’s strong points without getting too crazy, and the mystery plot is genuinely clever and satisfying. I’d call it a masterpiece in the genre—certainly one of Crispin’s finest efforts.