Written by Patrick
A few weeks ago, the French-language Paul Halter forum exploded in excitement, as the modern-day Master of the Impossible Crime updated his French website with two new books: Spiral, a young adult novel, and La Balle de Nausicaa (Nausicaa’s Ball), a short story collection. I had recently reviewed La Nuit du loup (The Night of the Wolf) and was convinced Santa Claus had listened to my plea for another short story collection from Halter. When I went on vacation to end 2011, nothing more had been posted on the subject. Little did I know what was brewing…
On December 27th, Paul Halter made the announcement that the book was available to order… from Amazon.com! This was an odd move— Halter, a flagship author of legendary publisher Le Masque, had chosen to go with Createspace, an American self-publishing service, to publish a French book! Fans in France were understandably upset, and when the book finally appeared on Amazon.fr, the item quickly became “temporarily out of stock”. When I got back on January 1st, I immediately ordered a copy for myself. After all, how couldn’t I? As a sincere, though not uncritical, admirer of Halter, I relished the opportunity to support his newest book by ordering a copy, and ironically, making it first available on Amazon.com made it far easier for me to do so!
So maybe I’m the first person in the world who has gotten to read his copy of Nausicaa’s Ball. Possibly not, but as I don’t see any reviews of it online, I’ll go ahead and give myself an award. Nausicaa’s Ball contains seven short stories by Halter, whose writing style is remarkably suited to the short-story form. Some of these stories are short, and others could be published as novellas. The title story had been published in Ellery Queen’s Mystery Magazine, but this is the first time it’s appeared in French as far as I know. Meanwhile, two of the stories included here were actually translated and included in the English edition of The Night of the Wolf, but they weren’t collected in the original French book. I’ve adapted my original reviews of these tales and included them in this post.
Now that we’ve gotten the background information out of the way, it’s time to dig into Nausicaa’s Ball and discover what gems are to be found in this collection.
La Balle de Nausicaa (translated as Nausicaa’s Ball) 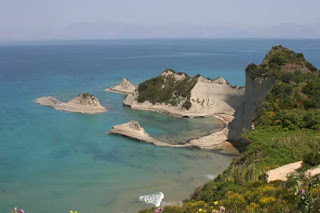 Rachel Syms is a beautiful actress, and one of her latest movies was inspired by the legend of Ulysses. Filmed on location on the isle of Corfu, she fell in love with her co-star Anthony Stamp, just as their respective characters, Nausicaa and Ulysses, were rumoured to have done on that very location. But Rachel is already married to a man named George Portman, so their love must remain secret. How very convenient, then, when Portman is discovered dead as the result of an apparent accident!
The cast list is small and this story is not really centered on an impossible crime. And yet the killer’s tricks to avert suspicion has a few nice touches to it, and the story in general is decently-written. Halter seems fascinated with Greek mythology, and this story offers further proof of it. However, there is one problem: a potential murder weapon is thrown into the sea… and yet, an identifiable set of fingerprints is lifted from it! It might not be impossible (I really don’t know), but it seems unlikely, since there’s a considerable time between its being tossed in and being discovered, and other people handle it in the process. It just doesn’t seem particularly likely… but if it bothers you, just imagine that Dr. Twist gave a call to his good friend Dr. Thorndyke.
Le Spectre doré (translated as The Golden Ghost)
Charles Godley is a mean, Scrooge-like miser who gets an unexpected visitor at Christmas. It’s a poor match girl, terrified out of her wits. She is being pursued by a mysterious golden specter, a story that Godley is not particularly inclined to believe. Why? When he opened the door, he saw the girl’s footprints outside, and they were the only ones there. His attitude suddenly changes when a friend of his drops by and confirms the girl’s story, as he too saw the ghost!
The solution is clever to say the very least, and the story’s atmosphere is interesting, since you’re not entirely sure what the golden ghost is up to. Is it malevolent? Does it mean good? However, as much as I like the story, its greatest flaw is an extremely small list of characters. It’s incredibly easy to tumble to part of the answer just by using the simple process of elimination. Nevertheless, it’s a very enjoyable and interesting read with a good impossible situation.
La Tombe de David Jones (David Jones’ Grave)
When David Jones was accused of a murder, he protested his innocence right until he was hanged. But he was determined to leave this world with a bang, and right before sentence was carried out, he called upon God himself to leave a sign in this world to prove his innocence: he asks God to make sure no grass will ever grow on the spot he is buried in.
And unlikely as it might sound, the wish seems granted, because in the middle of a lawn there is a big patch of nothing where grass ought to be. Dr. Alan Twist is unimpressed, but villagers tell him all about a man who was determined to break the curse and how it somehow kept on, although the soil was changed and gardening experts attended to the project… not to mention the particularly paranoid precautions: a giant wall that was constructed, guard dogs that were kept on patrol, and professional security guards that were hired!
The situation has all the unadulterated creativity that I’ve come to expect from Paul Halter, and the solution has got points of interest. I can see its potential to work if everything goes right, but if something went wrong, it would be easily discovered.
L’Étrange regard (The Strange Look)
This is the weakest story of them all, involving a woman with an unhealthy obsession for Hollywood actress Gene Tierney, her daughter who looks upon this idolatry with concern, and the mother’s boyfriend who shares this obsession. I won’t say anything more. The mystery is unchallenging because it is inspired by an event that gave a more famous author inspiration for a novel. Halter runs with this idea in a different direction, which is in a way interesting… but it’s also rather forgettable in the long run. I personally didn’t care for it very much, but it’s not a bad story, just a weak one.
L’Abominable bonhomme de neige (translated as The Abominable Snowman)
I found this story practically as good as La Marchande des fleurs (The Flower Girl), which was the masterpiece of The Night of the Wolf. The story has a brilliant idea at its core—a man named Irving Farrell is trying to find his friend’s house but gets lost. While wandering the streets, he bumps into a strange man. They get talking, and the man starts to talk about a murder that took place nearby many years ago…
The victim was Fred Graves, who had apparently been murdered by a snowman! The harmless-looking thing apparently burst into life and viciously killed him with a bayonet that had been placed in its arms. There was a witness to the crime, but nobody seriously believes his testimony. Because after all, how could it be possible? If someone of flesh and blood was responsible, they managed to leave no traces in the snow…
This is Halter at his finest. He effortlessly spins an excellent tale, and the major idea behind the solution has a delicious simplicity about it. The plot is dazzling and Halter manages to create one or two nicely atmospheric moments, such as a revelation in the final sentences, which you could never compel me to reveal! 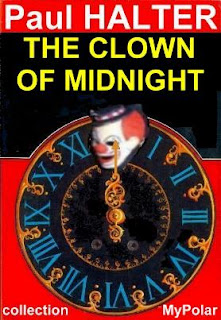 Le Clown de minuit (The Clown of Midnight)
A frightened woman seeks out help: she is apparently being stalked by a malevolent clown, who once a week rings her doorbell at midnight and stares at her before running off.
One of the things I admire about Paul Halter is his originality, but the solution to this story reminded me a bit too much of another story in The Night of the Wolf. Does it work? Yes, but the story is very short (a mere eight pages!) and it was over before it could really properly begin. The surprise works far better because of the story’s length, but because I’d seen it done before, I was far more prepared for it.
La Malle sanglante (The Bloody Trunk)
The story is divided into three total parts, of which one is an epilogue. And it works very well! Part One introduces us to our narrator, Sanders, who gets a visit from a strange character. The visitor, who gives the name of Noël Togram, claims he’s waiting for Sanders’ neighbour, Mr. Cruchet, who has apparently put his apartment up for sale. Sanders decides to be hospitable and invites the man inside, but things soon begin to get out of hand. The two begin verbally sparring and the tables are turned on the whole scenario multiple times. It’s the most fascinating part of the story.
Part Two becomes more routine. After all the twists of Part One, the second part decides to relax a little more with the surprises. The ultimate revelation is not a mind-blowing surprise (mainly due to the small list of characters) but it’s all most interesting, and in my opinion, the final line is one of Halter’s best endings to date. The story is 54 pages long and has actually been published by itself— I despaired of ever reading it, but now that I have, it’s been well worth the wait!
***
Overall, the stories in Nausicaa’s Ball are a very fun bunch. They’re all worth reading, even the weaker ones: none of these is a genuinely bad story. Some are stronger than others, but that’s how almost every short story collection works.
There’s only one odd thing about the collection: out of seven stories, four have nothing to do with impossible crimes! Halter is known for his variations on the impossible crime, so it seems somewhat odd for this ratio to exist. But impossible crimes or not, he sustains a highly entertaining quality in these stories that make for very fun reading, if somewhat brief reading at that.