Let there be blood... 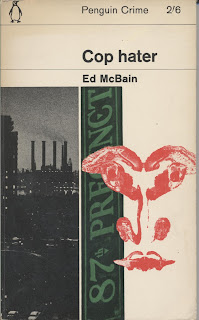 Someone has a grudge against the police department… more specifically, the cops at the 87th Precinct. Cops are being gunned down left and right, apparently at random by a “cop hater”. It is up to the cops of the 87th, already overworked and understaffed, to avenge their fallen colleagues and bring their murderer—or is it murderers?—to justice.

This plot device has been used many times in mystery fiction—whether in X Vs. Rex by Phillip Macdonald, or, more recently, Cop to Corpse by Peter Lovesey. (Why yes, this is a pathetic attempt at foreshadowing some soon-to-be-read books!) But this time it is being used by Ed McBain in one of his 87th Precinct police procedurals: Cop Hater. Sergio over at Tipping My Fedora is on a quest to review the entire series, and his reviews are always extremely intelligent and for the most part enthusiastic. So I decided to give McBain a chance despite my historical dislike of the police procedural… so could McBain rise to the challenge?


Well, yes and no. McBain is a gifted writer and the way he describes something such as lab techniques in detail is fascinating. In particular as a science student, I was fascinated to see how a police lab in the 1950s worked, since many of these techniques are long out of date and in some cases scientifically worthless! In the hands of a lesser writer, these segments would come out dry and that would kill the novel’s chance of success… 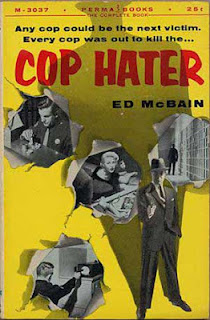 Ironically, I have no problem whatsoever with the detailed portrait of the investigation—I liked, for instance, the way the cops have to follow the most unlikely leads through—but I just didn’t like many of the other elements. Basically, I wasn’t fond of the way irrelevant passages kept cropping up. Cop Hater is a short book as is, but all these elements come across as excessive padding nonetheless. We get long and useless descriptions of the heat at this time of year… one of the cops fantasizes uncomfortably about the woman he is interviewing… and so on. These segments don’t add to character, don’t contribute much to atmosphere or story or anything really… they’re just… there.

Enough of my whining— this book does have some things working to its advantage. We get to know some of the cops in detail and this helps us sympathise with all involved—although the opening slab of dead meat is onstage so briefly that the attempt to characterize him via his desire for an air conditioner comes across as a very poor bit of writing. But putting that aside, since this is the first book in a series, everyone is a potential casualty (unless you know who the main detective is going to be in later entries). This helps to ramp things up a notch since you’re not given a clear-cut detective to look towards.

But also, the climax is just brilliant. It is everything a climax should be: it keeps you turning the pages in suspense, holding your breath as you wonder how everything will turn out. It’s a thrilling confrontation that seems like it can only end in tragedy… and I will say no more about that. 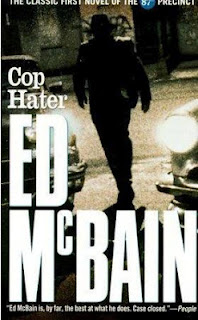 There’s one more thing I admire a lot about this book—although it is a police procedural, there is also an element of genuine fair-play mystery that is so good I didn’t even realize it was there (although I did instinctively guess at the answer). This takes pure skill— it’s no mean feat to write a police procedural that also fulfills the requirements of a fair-play mystery. It’s not a particularly challenging mystery—as I said, I guessed the answer instinctively—but when you look back at the clues that were there, it still leaves you appreciating the feat very much.

So overall, despite some excessive padding, Cop Hater turned out to be a wonderful and most entertaining read. I would recommend it to fellow aficionados as a solid starting point for this series. It takes a classic plot device and does a really nice job with it… and I will say no more out of fear of those darned Spoiler Rapids!