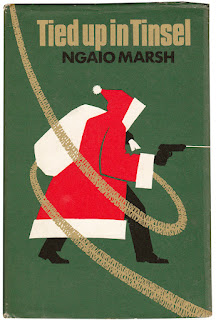 I have read only one Ngaio Marsh novel to date, and that was Death of a Fool/Off With His Head. It had a lot of good things in its favour—particularly an intriguing impossible crime—but the book was pretty uneven as a whole. Much of it was good but other parts were laughably obvious or just not very interesting. The detective, Roderick Alleyn, wasn’t repulsive, but he wasn’t particularly memorable, either. In fact, the most memorable point of the book was the work that went into the production of a traditional English dance. The question is, could Marsh improve when I approached her for my second dose of Alleyn, in the late book Tied up in Tinsel?

Tied up in Tinsel is a book about a very rich man, Hilary Bill-Tasman, who has an obsession for the past. He repurchases the old family home, tracks down old furniture and paintings and repurchases them, and plans to restore the house in general. But to do that and to maintain it, he needs servants. But where is one to find servants in the 1970s? Why prison, of course! More specifically, the entire staff is composed of murderers who have left their penitentiaries behind. This is seen as a form of rehabilitation… but things get very awkward when somebody begins to play malicious pranks recalling the murders that the staff had committed years ago! And it’s even worse when an unpleasant butler disappears after having played the role of The Druid (aka Santa) for the local children at Christmastime… 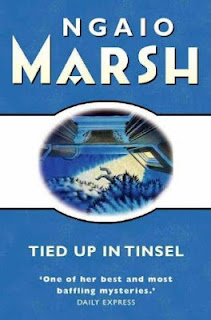 Once again, Ngaio Marsh does a fine job setting up the mystery. We get detailed pictures of all the servants and their past crimes, and apart from a laughably cliché religious maniac, these are very good portraits, and the satire on rehabilitation is very funny. We get a lot of theatrical atmosphere when the household rehearses the presentation in which the Druid appears. Alleyn’s wife Agatha Troy appears in a substantial part as one of the guests in the household—she is painting Hilary’s portrait—and she is plenty of fun to keep track of. (The novel, apparently, resembles an earlier Marsh novel that I haven’t read: Final Curtain.)

The problem is that as marvellous as the set-up is, Marsh loses interest as soon as the butler disappears midway through the book. We get long scenes where nothing happens and Troy waits around for Alleyn to show up—because heaven knows, an intelligent independent young woman couldn’t possibly solve a nasty crime like murder (Oops, did I give that away? Well don’t kid yourself—you knew it was coming.)… especially not without a man around. When the butler disappears, we sit around for ages waiting for the altogether-too-obvious corpse to show up and it gets very dull very quickly. Alleyn shows up and promptly gets to work... by refusing to get involved and trying to say “no” as politely as possible. Our hero, ladies and gentlemen…

Truth be told, this mystery falls apart because the solution comes like an afterthought in the final pages. Alleyn pulls the solution out of his a––––. (I say, there are ladies present!) He’s right of course because, well, how couldn’t he be? Oh, Marsh makes a lame attempt at trying to explain the solution, but it is pulled more-or-less out of nowhere and gives no satisfaction as an ending, especially since not everything is adequately explained. This could have been an ingenious little mystery but Marsh decides to show people sitting down, servants insisting that they’re not murderers—at least, not anymore, sir—and all the fun liveliness and quirkiness of the set-up dissipates. 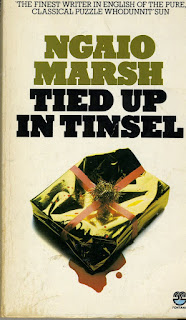 It doesn’t help that two of the characters are abysmal failures. One is a young girl named Cressida, engaged to Hilary. I do not think that I have ever encountered a worse portrait of a young person. Marsh was pathetically out of touch, using a poor mish-mash of slang (“You know?”) and formal dialogue. Cressida’s personality flip-flops as the scene suits her. At times she seems to be a perfect hostess but more often she’s a little b–––––. (I say, my boy! The ladies!) The other failure is one of the servants, a religious maniac who keeps telling everyone that they’re sinners in the sight of the Lord and how they will all be punished by the wrath of the Heavens. Dear authors in all genres everywhere: religious people don’t act this way. Please get that through your thick skulls already. If this fellow acted this way all the time (many characters comment that “He’s certifiable!”) there is no way he’d be allowed to leave whatever institution he was in. He’s such a pathetically bad character that I can’t even remember his name.

I don’t recommend Tied up in Tinsel. This is a book that contains some marvellous scenes, especially when the Christmas presentation is being planned and presented. There are even some fun characters, including a simply marvellous Colonel. But none of it is tied convincingly together. If you want to read the excellent set-up, go right ahead, but tune out after the disappearance. Nothing good lies beyond that point. And if you want to find out whodunit, come up with your own solution… and don’t feel the need to justify it with logic. Marsh didn’t care enough; why should you?