Written by Patrick
This is the second instalment in my unofficial series on Batman stories. To catch up on why I am doing this, feel free to read the first post in the series, which is also a review of Edward D. Hoch’s The Pirate of Millionaire’s Cove. 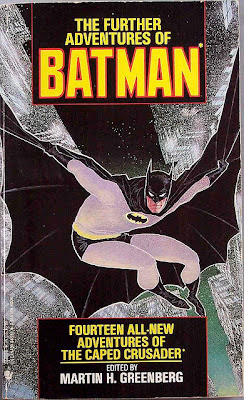 Although I have yet to read one of his novels, Max Allan Collins is no stranger to me, or to this blog. When I did a series of reviews of hardboiled mysteries, I kicked it off with one of his quotes and agreed with the general sentiment (though I expressed reservation at the generalisation of it). A while ago, he did a slideshow for The Huffington Post where he chose his “game changers” in the mystery genre—not necessarily personal favourites, mind you, but people who really transformed the genre in different ways. And this list was an interesting one! Kudos to Collins for praising Agatha Christie’s characterization and for including Ellery Queen on the list, and also for an excellent defense of Mike Hammer, although it is not a defense that makes me warm up to the character. (Also, the comments are frankly depressing, and if I hear one more person praise an author as “transcending the genre”, it’s to the guillotine for them!)

But I bring up Collins today because as it turns out, he too wrote a Batman adventure that was collected in The Further Adventures of Batman. Entitled The Sound of One Hand Clapping, this is a story that includes Batman’s arch-nemesis, the Clown Prince of Crime—The Joker!


The Joker is bored. Nobody has yet invented the character of Harley Quinn and so the Clown Prince of Crime is sitting in his lair, wondering why he feels so lonely and whether there is any point to living. Not even Rodney Dangerfield can cheer him up… and then the news goes on. Time suddenly stands still: the Joker has just seen the love of his life, Camilla Cameo.

Miss Cameo is a professional mime who has undergone much stress of late, finally snapping and committing a series of crimes under the alter-ego of The Mime. And guess who finally caught her? That’s right, it’s the Caped Crusader himself, old Batso! The Joker is enraged, and so he decides to free The Mime and exact revenge on Batman…

I warn readers right away that this isn’t a mystery—in fact, this plays oddly like an episode from the famous Batman: The Animated Series. In fact, Collins’ dialogue for the Joker is so reminiscent of Mark Hamill’s portrayal that when the Joker swears (one time), it feels very oddly out of place. It is quite simply the Joker doing what he does best—and in this story, he’s thrown a particularly awesome line to taunt Batman with.

But that being said, this isn’t a particularly memorable adventure—it’s a fun story, to be sure, but it doesn’t come close to the finest Batman adventures. But then again, I speak from a slightly different vantage point than most fans. I love Batman most when he is “The World’s Greatest Detective”, having to solve some sort of riddle (which is why adventures involving the Riddler hold such a fascination for me). But in my opinion, the best episode of the animated series was Perchance to Dream, a kick-ass story in which Bruce Wayne wakes up and finds himself in a seemingly-ideal universe where his parents are alive, he’s engaged to Selina Kyle, and someone else is Batman. He has to figure out what has happened, leading to an exciting climax and shocking reveal—and trust me, the twist is awesome, with some surprisingly fair clues pointing out the solution (though to be fair, I think Batman fanboys would have an easier time with the puzzle). It’s a mystery where you don’t even realize you’re watching a mystery until the finale. And if you want to see Batman at his finest, I cannot recommend that episode highly enough.

Max Allan Collins is obviously a skilled writer, and his respect for the Golden Age of Detection is most appreciated by myself… and I have a feeling that we will literarily meet again some time soon… But for now, I will applaud his efforts in constructing an enjoyable story.

One final update: thanks to Barry Ergang, I am now awaiting the arrival of two more books in this Batman series edited by Martin H. Greenberg. These books star The Penguin and Catwoman—and while they may seem like odd choices for villains to use in this series, I will remind you that they were the villains in Batman Returns, which may have influenced the choice somewhat. (I find myself wishing that the Riddler and Mad Hatter got their own collections! Can you imagine what Edward D. Hoch would do with that?)