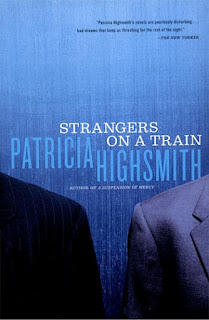 Strangers on a Train was Patricia Highsmith’s first published novel, and it was a smash hit. So big, in fact, that a film adaptation was quickly made by the master of suspense himself, Alfred Hitchcock. And the first script was written by Raymond Chandler – although venom-filled “creative differences” between Hitch and Raymondo ended up getting Chandler dismissed from the project. The final product is one of Hitchcock’s finest thrillers. But how does the novel compare?

Fans of the film are warned that the book is very, very different from the film. I suspect that many of the differences arose thanks to the Hollywood censors, but if that was the case I can only say “Thank God!” When reviewing Francis Iles’ Before the Fact, which became the film Suspicion, I remarked that Hitchcock could take the silliest stories and turn them into terrific thrillers. My batting average for books-that-become-Hitchcock-films is very low right now: Strangers on a Train is one of those silly stories. And I have no idea why it has such a high reputation.


Story first: Guy Haines and Charles Anthony Bruno meet on a train. Guy is a promising young architect who is on his way to get a divorce from his wife, who is pregnant with another man’s child. Bruno, meanwhile, is very busy doing nothing whatsoever, and he tells Guy about his father, who controls Bruno’s purse strings and keeps him on a tight leash. Bruno tells Guy that he has an idea for a perfect murder: they will swap murders. There’s no reason to suppose that Guy and Bruno know each other, so there’s no way their murders will be connected. Guy doesn’t take Bruno seriously and is only too glad to leave the train, but Bruno is fascinated with Guy. So Bruno decides to grant Guy a twisted favour: he hunts down Guy’s wife Miriam and murders her at an amusement park. 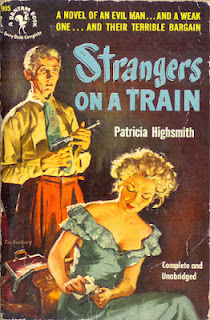 So far so good. Guy, it turns out, has a study alibi, and the police are left puzzled. Guy suspects that Bruno may have had something to do with Miriam’s death, but he doesn’t want to find out. Then Bruno gets in touch with Guy, admits he’s responsible, and tells Guy it’s his turn to uphold his side of the bargain. Guy refuses. And so Bruno insinuates himself into Guy's life, planning out his father’s death and hounding the architect until finally Guy breaks down and commits the murder.

And here, ladies and gentlemen, is the last stop. From this point on, the only way the path leads is towards insanity. I’m afraid that I simply have no sympathy for moronic, spineless, cowardly idiots, and that’s what we have in this novel. Guy Haines is, to use a childish term, a sissy. Here the moron gets letters from Bruno—handwritten, presumably signed letters, which probably have fingerprints all over the place!!!—which map out the proposed murder, tell Guy what to do, give tips on how to escape the murder scene, etc. Bruno even sends him a gun!!! And what does our hero do, ladies and gentlemen? Surely he would call the police, for presumably, coercion into murder was illegal in the 1950s, even if there were no laws against stalkers? Hell, no! He does the only reasonable thing: destroy the evidence!

No question of it: Guy Haines wins the Darwin Award for 1950. The character can go rot in the same hell as Lina Aysgarth from Before the Fact. The entire novel is a situation of Guy’s own making. You can make the argument that it makes for a compelling character study, an allegorical novel of good and evil within each man. I make the argument that Guy is a moron. Here he is with physical proof that Bruno has killed his wife and is trying to get him to commit a murder—he’s in the position of strength! Instead, he destroys the evidence and then whines about how his guilt haunts him. In the Hitchcock film, Guy had a reason for being frightened of Bruno, who was capable of framing Guy by planting false evidence and threatened to do so, leaving nothing behind for Guy to use against him. The movie Guy is a likeable hero, caught in a perilous situation. The book Guy? I say he can go straight to hell.

And it’s a shame too, because the book does start out quite well. Bruno never makes a good villain—indeed, he sounds like a snivelling twelve-year old momma’s boy and I desperately wanted to slap him—but the situation is original and at first quite compelling. Guy spoils the book, but he doesn’t do it singlehanded. In fact, he couldn’t have done it without Bruno. Bruno commits the greatest sin a character can commit in a mystery: he’s annoying. 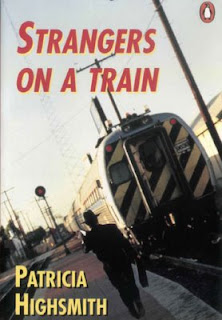 In the Hitchcock film, Bruno at first seems to be a charming fellow, and his proposed murder scheme sounds like a joke. That’s how Guy and the audience choose to take it at first, and that makes the murder shocking. But in the novel, Bruno is an obvious psychopath—you can spot his insanity at twenty paces. He’s never charming—he’s an annoying little brat. You have no idea why Guy would have a conversation with him in the first place. Not even Guy understands it, although he’s the one who follows Bruno to his compartment in the train and they have dinner together. When Bruno demands that Guy commit his murder, it isn’t the demand of a dangerous murderer but the petulant tantrum of a spoiled child. I had a hard time finding the suspense that is supposed to permeate this novel.

And the book, incidentally, drags on and on and on and on and on AND ON!!! The pace is snail-like and gets extremely boring. After the two murders are committed, you simply have no idea why Guy and Bruno would keep seeing each other. No wait—if they didn’t see each other you couldn’t have any obvious SYMBOLISM!!! The entire novel feels like the author is trying to write Literature with a capital L, but she doesn’t succeed. There isn’t a shred of subtlety to be found in this novel—the author has to explain every instance of blatantly-obvious symbolism to you instead of letting you draw your own conclusions. I give you this piece of sparkling, inspired writing:

“Guy felt a boyish, holiday delight in having Bob with him. Bob symbolized Canada and the work there, the project in which Guy felt he had entered another vaster chamber of himself where Bruno could not follow.”

There is one exception. Throughout the book, we get random snippets from articles that tell us what a genius architect Guy is. I know this is supposed to symbolize something but for the life of me I have no idea what it’s supposed to mean! It only serves to make you madder at Guy—you’re told he’s an artistic genius, but how can a genius be such a moron???

But there’s more! I sure hope you like twisted psycho-sexual character studies! Because in this book, Bruno’s fascination with Guy is given a very unsubtle homoerotic context. This made me uneasy because it’s so possessive and obsessive. But it doesn’t make me sympathise with Guy. I stopped rooting for him at page 101. Instead, Strangers on a Train became a nasty story about nasty characters being nasty to each other for no reason other than “the plot says so”. Oh, and Bruno? Not only is he an obsessive homosexual with clear mental issues, he’s also in love with his mother. (How the hell does that work???) 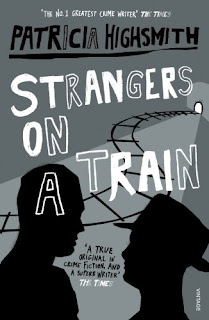 I didn’t like either of the two male leads, and nobody else is worth talking about. Miriam is a manipulative little pig, an empty-headed little bimbo who appears for maybe fifteen pages and makes you want to strangle her for 14 pages before Bruno does it for you on the 15th. Bruno’s father is just there, although the book’s blatantly obvious symbolism is sure to tell you that that’s the whole point. Bruno’s mother is also just there, except because Bruno is in love with her, it makes you want to run away screaming whenever she appears. There’s nothing to distinguish her—she’s another moron who can’t tell that her son is an obvious psychopath. Finally, there’s the love of Guy’s life, Anne… who again, is just there and does nothing! Only an idiot could be this oblivious: but that doesn’t surprise me.

Patricia Highsmith was not a happy person, and it shows in this book. But instead of making me interested in her characters, this aspect made me want to get them all in a secluded alleyway and open fire on them with a tommy gun. In Bloody Murder, Julian Symons praises Patricia Highsmith as “the most important crime novelist at present in practice”, who takes a fascinating central idea and “in Highsmith’s hands they are starting points for finely subtle characters studies”. That’s certainly not what I saw. However, Symons does admit that she “is an acquired taste, which means a taste that some never acquire”. He goes on to tell readers this story:

When I was reviewing crime fiction regularly, Victor Gollancz used to write to me before going on holiday asking me to recommend the best books of the year published by other firms than his own. … He then bought these books and took them away with him. At my insistence he bought one year The Two Faces of January, which he disliked intensely. To his letter in the following year he added a postscript: ‘Please – no Patricia Highsmith.’

Strangers on a Train is a massive miscalculation which I thoroughly hated, although the beginning is quite strong. It’s a pretentious, annoying little book which is convinced that it is being Real Literature. The characters are either bland or nasty, and Bruno’s twisted psychology and sexuality is seriously alarming. It’s poorly written and full of obvious SYMBOLISM!!! And most annoying of all, the entire book is unnecessary. It’s a situation fabricated by one character being a complete moron. You can perhaps argue that makes the whole thing so much more fascinating, but I concur with Victor Gollancz. 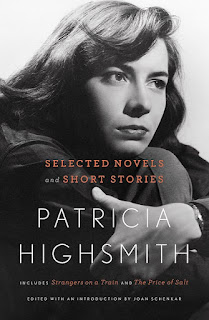 Notes: Patricia Highsmith was a very unpleasant person in real life. In the introduction to Patricia Highsmith: Selected Novels and Short Stories, we are told that the inspiration to her lesbian romance novel The Price of Salt “appeared in the form of an alluring blonde in expensive furs who sauntered up to Pat’s toy counter and ordered a doll for her daughter. Their two minute encounter was so erotic for the young writer (who had her usual response to sexual appeal: she fantasized about strangling the woman) that she rushed home in a high fever to write out the entire plot of The Price of Salt in two hours.” (xiv) I admit that Patricia Highsmith is historically significant for the genre, having written explicitly homosexual characters long before George Baxt (yes, him) created the openly-gay black detective Pharaoh Love. But Patricia Highsmith the person is the kind of person I would avoid in real life: an anti-everybody who seems to have been something of a misogynist. And this personality finds its way into her books. This will prompt one of two reactions from the reader: fascination or repulsion. There seems to be no middle ground. I was not fascinated by Highsmith, but this is my purely personal, and admittedly biased, opinion. Strangers on a Train was Highsmith’s first book and perhaps she got more subtle as time went on, but the book repulsed me so much that I have no intention of returning to Highsmith. Ultimately it’s up to the reader. Personally, I want my money back.