Murder... with an Overpowering Dose of Romance Thrown In 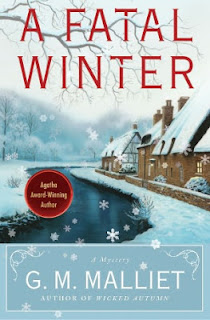 The first time we met MI5-man-turned Anglican priest Max Tudor, he soon became involved in a murder investigation in a book entitled Wicked Autumn by G. M. Malliet. Now, Father Max is back in A Fatal Winter, the second instalment of the series. In this book, Max Tudor gets involved in a conversation on a train with an elderly lady. She turns out to be Lady Baynard, a well-to-do woman residing at the nearby Chedrow Castle, and her snobbery seems like something out of Victorian England. So Father Max listens without listening and manages to live through the train ride home…

Unfortunately, his fellow passenger isn’t quite so lucky. Not long after her chat with Father Max, Lady Baynard meets her death. But before she died, her brother Oscar, Lord Footrustle, was savagely murdered with a knife. Lady Baynard seems to have died of natural causes, but the police are not satisfied, and seem to think that she may have died of the shock of finding out that her brother was killed. Either way you look at it, it’s a mess, and the police turn to Father Max to solve the case.

A Fatal Winter shares a bizarre relationship with my previous read, S. A. Steeman’s Le Trajet de la foudre (The Path of the Lightning). It’s bad luck for G. M. Malliet that I read the two books so close together—it reads almost as if the author had taken a major revelation of Steeman’s book and decided to make it the whole solution, without any of the additional complexity that made Steeman’s book such an ingenious treat.

But a far more likely influence for Malliet is Agatha Christie. Wicked Autumn was an excellent update of the “English village mystery” in a modern setting, proving once and for all that such mysteries are not incompatible with a modern-day setting. The main problem I had with the last book was its ending (which has lost its novelty for me) and its very poor pacing. A Fatal Winter improves on the pacing element, but once again the ending comes up short…

In fact, the ending almost ruined the book for me. I’m not talking about the solution; I’m talking about the ending. I read this book via audiobook from Audible and… well, the mystery was wrapped up nicely and we found out everything and I was getting ready to turn on some music… and we’re thrown into an epilogue. And it goes on. And on. And on. And on. And on!!! You see, the book had about three or four scenes where Father Max had some romance going on with Awena Owen, the village’s New Age neo-pagan. This is a boring subplot that disrupts the novel’s pacing and always feels forced. And because it was so thrilling to begin with, how about we end the book with a forty-minute long epilogue which reads like we’ve switched genres into a romance novel about a forbidden love?

Look, if you like romance novels, I’m fine with that. I don’t particularly care for them and I resented the intrusion. (The only romantic novel I’ve ever read that I absolutely love is Henryk Sienkiewicz’s Quo Vadis, a romance set in Imperial Rome during the time of Nero’s persecution of Christians. It’s a terrific epic novel just as full of adventure and near escapes as it is romance. But to return to A Fatal Winter.) Here, the romantic subplot intrudes on the main story, and feels so forced that I felt more angry than anything else when the ending insisted on wrapping this angle up in as long-winded a way as possible. I had to resist laughing out loud at some of the dialogue, which sounds like it came straight from one of those subpar romantic comedies that come out every Valentine’s Day. I don’t object to romantic subplots, but I do object to forced, intrusive subplots of any kind. My detective can pick a better time to worry about his alcoholism, his haemorrhoids, or how pathetic his love life is… especially when there are three decapitated corpses surrounded by unmarked snow, and the ghost of an armour-clad knight has been seen stalking the grounds of Gloom-and-Doom Manour. You’d think the detective would have some other things to worry about. In the immortal words of Jacques Barzun: “Am I a couch?”

Clearly, I’m just not the novel’s target audience, and I just wasn’t interested in the romantic life of this “perfect man”. This book fits the “cozy” label far better than most of Agatha Christie’s stuff, but critics insist on using “cozy” to describe Christie. I’ve made my objection on that point reasonably clear throughout my blogging career.

Overall, A Fatal Winter is not bad, but G. M. Malliet has some atrocious luck when it comes to being read by me. I had just read a novel which pretty much uses this book’s entire twist as just part of its solution, and by comparison solving this one was a snap. And so I was left on the sidelines waiting for the outcome I knew was coming sooner or later, and being annoyed whenever the romantic mush interrupted proceedings. The ending is just not for me, and left me feeling more annoyed than anything else. It’s not as good as Wicked Autumn, which was certainly more ingenious, but it’s an okay continuation. I just hope that the next book in the series won’t have such an annoyingly intrusive romantic angle to it.

Note: The author's tendency to compare people to animals is unchanged. This occurred too many times for me to count, and at one point I began to wonder why there are so many comparisons like this. They're fun little comparisons... but why so many of this particular kind?