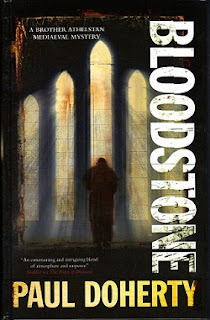 The Wyvern Company were really no better than a group of medieval thugs. While on the warpath in France, the company sacked a French abbey and ran off with (among other things) the sacred Bloodstone ruby, allegedly collected from the blood of Christ while he hung on the cross. The ruby was given into the possession of Sir Robert Kilverby, a wealthy merchant, whose duty it is to produce the Bloodstone twice a year and who is safeguarding it until such a time as the Wyvern Company dies off.

That day might come sooner than expected, because somebody is murdering members of the Wyvern Company one by one. But Sir Robert Kilverby is also found dead, poisoned inside of a locked room. How was the crime committed? Lucky for us, Brother Athelstan investigates the matter, and in good time a second impossibility is thrown in the good brother’s face when a fire is started from inside of a locked room: how could the culprit have started the fire without waking the room’s occupant and without disturbing the locked door?

It was the answer to this second impossibility that really got me enthusiastic about Paul Doherty’s novel Bloodstone. It’s just an excellent solution that makes perfect sense in the historical timeframe, and which has a fair bit of diabolical ingenuity backing it up. The death of Sir Robert, while good, was not quite as clever, although it’s still quite a good solution to the riddle proposed by Doherty.

As a plot, Bloodstone is quite satisfying. It’s a complex story with plenty of murders to fuel the action, two impossibilities, and plenty of historical colour. The story could be separated into two halves. One of the halves is genuinely excellent. The other has got some points of cleverness, but the culprit is far from a surprise and is really discovered more via a process of elimination than anything else.

I also really enjoyed the characterization. I hesitate to say too much, but there are really some memorable characters in this book, and some of the murder victims’ fates are genuinely tragic ones. It’s odd, yet satisfying, considering how brutal the Wyvern Company could be in its heyday. But now, its members are old and frail and cannot battle as they once did: the proud and mighty warriors reduced to frail, elderly men.

The historical colour, as usual with Doherty, is excellent. Doherty has the rare gift of being able to suck you into the historical time period without sacrificing the plot. There’s a bit more description than usual in this book, but it’s certainly enjoyable reading and quite colourful. For a few hours you can easily believe yourself to be back in a long-gone historical period. Particularly good is a bit where Sir John Cranston, Coroner of the City of London, goes on a walk through London streets and sees how people react to his presence.

Overall, Bloodstone is a very good read which I highly recommend to fans of Brother Athelstan or Paul Doherty in general. This has got two excellent locked-room problems, one of which is particularly fiendish in terms of its ingenuity. The characterization and historical colour are as usual superb. And everything is followed by a historical note to the curious reader, which shows you just how well Doherty knows his subject and how well he’s managed to integrate it into his novel.