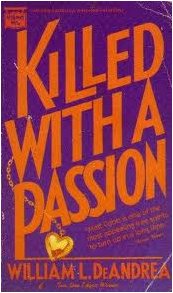 One of my all-time favourite authors is William DeAndrea. That’s hardly a secret – the man combined a perfect amount of tricky plotting with characterization and style, and consistently turned out high-quality stuff until his all-too premature death in 1996. I’ve enjoyed reading his stuff so much that I’ve even created a page dedicated to his work, to keep track of all my reviews. Imagine my delight, then, when I found out that The Mysterious Press was planning to reissue DeAndrea’s stuff as e-books! This release will introduce DeAndrea to a wide audience of readers. Among the releases are all three of his Niccolo Benedetti novels – including the Edgar-winning The Hog Murders – and the short-lived Lobo Blacke/Quinn Booker series – which read like Nero Wolfe and Archie Goodwin in the Wild West. But there’s another series character who will be making his way to the e-reader screen for the first time, and that is Matt Cobb.

Cobb was introduced to readers in DeAndrea’s Edgar-winning debut novel, Killed in the Ratings. (He won a grand total of three Edgar Awards—the third for his excellent non-fiction work Encyclopedia Mysteriosa). Cobb works at a media conglomerate known as The Network – a telecommunications giant like ABC or CNN back in the days when television was king and didn’t have to worry about the Internet. He is Vice-President of Special Projects, a job that basically entails his making sure that The Network stays out of trouble. But in some cases where trouble already has occurred, it’s up to Cobb to initiate Damage Control mode.


It was actually while performing his duties that Cobb decided to accept an invitation to the wedding of Debbie Whitten. Cobb has known Debbie since his college days, but he didn’t want to come to the wedding at first. The reason is simple: one of Cobb’s best pals, Dan Morris, has been madly in love with Debbie for years and has been constantly turned down. On one occasion Debbie even decided to marry Dan before calling everything off. But Dan simply cannot learn and keeps coming back for more of the same. It’s basically a form of psychological torture.

Tensions are high when Cobb arrives on scene, but before long Debbie is found murdered, and everyone assumes that Dan finally snapped. But Cobb refuses to believe that his friend could do something this horrible, and so he sets out to prove Dan’s innocence.  This seems like quite the daunting task: the circumstances of the murder make it seem impossible for anyone else to have committed the crime, and without an alibi of any sort, Dan’s goose looks well and cooked. But since when has that stopped Cobb?

Killed with a Passion is an excellent entry into the Matt Cobb  series. What I particularly enjoy is Cobb’s narrative voice. It is as though DeAndrea had captured the essence of Archie Goodwin and cast him in his own series of detective novels. Cobb’s voice practically sparkles off the page, and that breezy snappy tone is somewhat reminiscent of the hardboiled style of writing. The influence gets particularly clear when Cobb is forced to talk tough with a thug or when he confronts corruption. This is a guy who is supremely likeable, but who won’t let anyone steamroll over him – indeed, anyone foolish enough to try such a feat will regret doing so.

Other characters are plenty of fun, including Cobb’s romantic interest. I also liked Dan Morris, whose romantic pains are tragically believable. You want Cobb to triumph and clear this poor guy’s name, and even though Dan spends much of the novel behind bars, he’s a distinct presence throughout. Cobb has to face more than his fair share of corrupt citizens this time, as the dead girl’s father happens to own a large chain of newspapers and uses everything in his power to demonize Dan and essentially guarantee a conviction before the jury has even been selected.

The mystery is a good one. You could roughly divide it into two parts. One of them is about who killed Debbie. The other part is related to corruption in the TV industry. These two parts might be related—one might be a motive for the other, or the connection could be tangential. You won’t get that out of me. But I will admit that one of these halves is much stronger than the other. Indeed, I solved one of the halves almost immediately based on a clue that haunts Cobb throughout the book without his being able to spot its significance.

That being said, Killed with a Passion is still well worth the read. It may not be DeAndrea’s strongest plot, but with plots like The Hog Murders and Killed on the Rocks under his belt, an average plot for DeAndrea was stronger than most authors will ever get. This book is an excellent read that is fairly clued, entertaining, and delivers more than its fair share of thrills!

However, I wouldn’t recommend this as a starting point for the Matt Cobb series. Although no names are ever mentioned, a major twist of the previous entry, Killed in the Act, is revealed and forms a major part of Cobb’s character development.

For more information and to see what else is available, visit the Mysterious Press' website. These books are now available in the Kindle store.